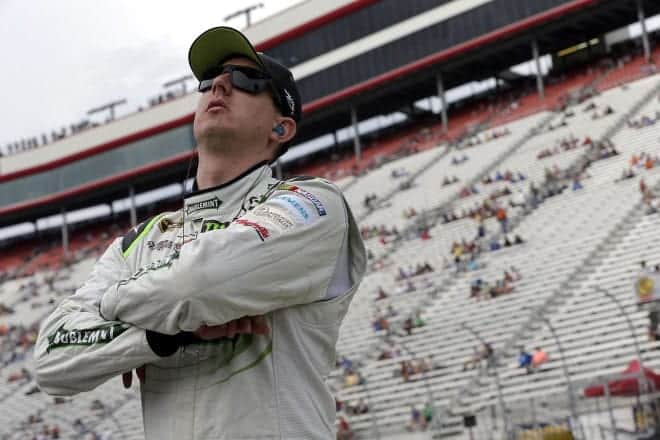 UPDATE: Owner Joe Gibbs addressed the media Sunday morning. He said plans beyond Daytona are “undetermined” along with the amount of time Busch is in the car. However, Busch underwent successful surgery on his right leg Saturday night and is resting comfortably. His mid-left foot, which underwent fracture will likely not be repaired by surgery (if even needed) until Busch is released from the hospital and heads back to Charlotte.

Gibbs thanked the NASCAR community for all their thoughts and prayers. Saying Samantha and Kyle are “like family,” he reminded his driver how much he loved him before surgery and stressed Kyle is in good spirits. Crafton is on a one-race deal, but Gibbs also stressed Kyle really wanted Crafton in the car for Daytona.

Kyle Busch will be sidelined indefinitely with multiple injuries suffered in an XFINITY Series wreck. Busch, whose condition was released in a statement by Joe Gibbs Racing Saturday night, has been diagnosed with a compound fracture of his right leg. The injury was serious enough to require surgery, which Busch is undergoing at this time.

Busch also suffered a mid-foot fracture of his left foot. There is no timeline for his release from the hospital or his return to the sport.

With Busch out, Matt Crafton has been tapped to drive the No. 18 Joe Gibbs Racing Toyota in tomorrow’s Daytona 500. Crafton, who failed to qualify for a Cup race at Indianapolis last summer, will be making his series debut in the sport’s biggest race. The two-time reigning Truck Series champion, good friends with Busch has been cleared by NASCAR for competition.

As of now, the deal is for one race only but it’s clear Busch will be out an extended period of time. An interim driver for the No. 18 Toyota has not been named for Atlanta and beyond.

In the mean time, NA$CAR will consider putting SAFER barriers alomg that wall.

Except for NA$CAR, ISC and Speedway Motorsports mot wanting to spend the money, there is no excise to not have tracks completely lined with SAFER Barriers.

Sorry to hear that the Busch brothers won’t be in the field today, both excellent drivers. But I’m very happy to see Matt Crafton get this opportunity, he is ten times better than oh… say the driver of the green car. Yeah…

More knee jerk reaction..feel for kyle but shit happens. Just wait till a car jumps the wall on pit row!!! And starters wearing helmets??? Give me a break…what’s next? Fans wearing helmets in the first 10 rows?