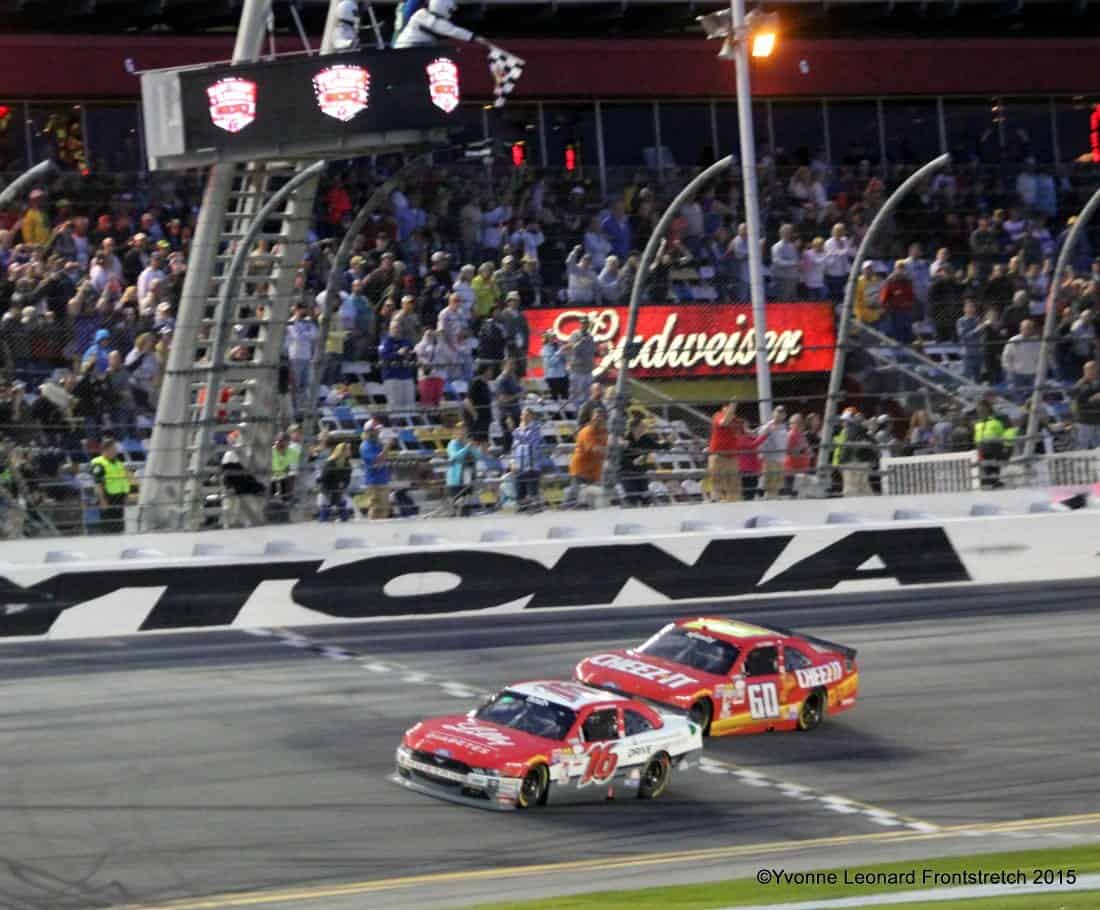 Three-wide racing, two big crashes, one flip and a first-time winner in Ryan Reed; the season-opening Alert Today Florida 300 at Daytona had it all. In the end, it was the Roush Fenway Racing driver who came out on top as part of a 1-2 teammate finish with Chris Buescher helping him blow by Brad Keselowski.

The first 80 laps of the race featured zero cautions, but by no means lacked in excitement. Austin Dillon led the field to the green flag to start the race, and his little brother Ty, along with new Roush Fenway driver for 2015, Darrell Wallace Jr, traded the lead between themselves multiple times before the first round of green flag pit stops around lap 40. Pit stops were relatively calm, with the exception of rookie Daniel Suarez, who missed his pit stall. Defending race winner Regan Smith took the lead for the first time with 51 to go, and would hold it until the first caution of the race with 41 laps to go for a tire in the grass.

The latter third of the race was characterized by two major wrecks. The first big one came with 28 laps to go when Kyle Larson got into the back of Suarez, causing the rookie to turn sideways into the middle of the pack. Eleven drivers were involved, including defending champion Chase Elliott, Brendan Gaughan and Regan Smith, who flipped over.

With nine laps to go, Kyle Busch made contact with his teammate Erik Jones, causing Jones to crash, and take multiple cars with him. Busch spun into the infield wall in turn one, one of the very few places on the track with no SAFER barriers, hitting head on at nearly 100 mph. Busch needed to be assisted out of his car and loaded into an ambulance on a stretcher, with special assistance on his right leg. He was taken to Halifax Medical Center and as of now, there is no news on his condition. He will not race in tomorrow’s Daytona 500.

At the end, with help from his teammate Chris Buescher, Ryan Reed made the move around Brad Keselowski entering turn three and hung on to win his first career race in the NASCAR XFINITY Series. Buescher completed the 1-2 finish for Roush Fenway Racing, while the Dillon brothers came across the line in third and fourth, with Ty besting his older brother. Keselowski rounded out the top five.

The final race in Budweiser Speedweeks, the Daytona 500, can be seen on FOX tomorrow at 12:00 PM EST.

Well, your first win is always big, so, if you are going to get your first win, it might as well be really big! Congratulations to Ryan Reed on his first win in the Xfinity series, and at Daytona no less! It was a good day for Roush, with Chris Buescher finishing second. With Reed, Buescher and Wallace Junior coming up, and showing they can get the job done, if I was Ricky Stenhouse, I’d be nervous. I know Stenhouse won two series championships, but, he has been less than stellar in Cup. Look for one of these three to be in the 17 before year’s end.