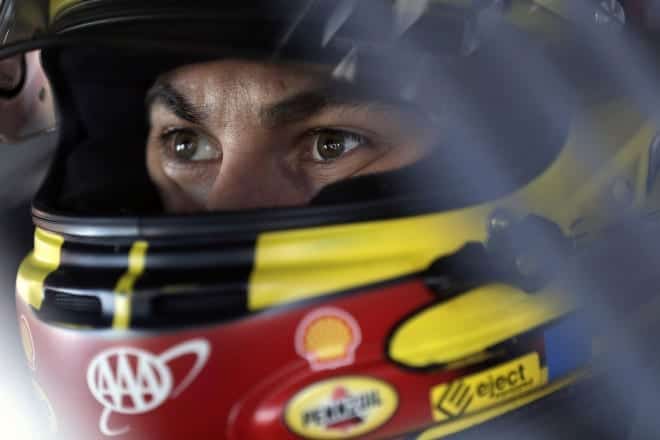 Joey Logano won the Daytona 500 on Sunday after a suspenseful final 15 laps that saw the frontrunners racing three-wide for the lead and a green-white-checkered finish.

The win was his first at Daytona and his ninth career win.

“I can’t believe it. This is absolutely amazing. Daytona 500!” he told FOX Sports’ Matt Yocum in victory lane. “I was so nervous the whole race, pretty much. This is our weakest racetrack, superspeedways. I couldn’t be more proud.”

Kevin Harvick and Dale Earnhardt, Jr. finished second and third after a pileup on the backstretch on the final lap brought out the caution, Jeff Gordon, in his final Daytona 500, the first to spin. He finished 33rd.

For Earnhardt, the finish was his fourth top 5 in the last five Daytona 500s, but felt his restart with two laps remaining cost him the win.

“I made a bad decision on that restart,” he said. “I should’ve stayed on the bottom, been a little more patient. We had a real fast car, probably the best car here. Should’ve won the race.”

The finish was just as dramatic after a late race caution involving Justin Allgaier as it was before. With 15 laps to go, the top half of the field formed up three-wide and held that formation for eight laps until Logano, Hamlin and Truex broke away. With three laps remaining, Allgaier spun.

“I had to make all the right moves and not get snookered on the start,” Logano said of the green-white-checkered. “This doesn’t happen very often. You only get one shot at this. ”

Logano not only had to overcome three-wide racing and an extended race, but also the possibility of an expiring engine. His teammate Brad Keselowski, and Ryan Blaney, whose Wood Brothers Racing team gets its engines from Team Penske, both suffered engine failures within the final 40 laps.

Tony Stewart’s quest for a first Daytona 500 victory will continue for another year after a lap 42 accident took him out of contention.

Regan Smith and Matt Crafton, subbing for the Busch brothers, finished 16th and 19th, respectively. Kurt Busch sat out the race after being suspended indefinitely by NASCAR for alleged domestic violence against ex-girlfriend Patricia Driscoll. Meanwhile, Kyle Busch was sidelined following a hard crash in the XFINITY Series race the day before.

Stay tuned to Frontstretch for post-race commentary and more from Daytona.