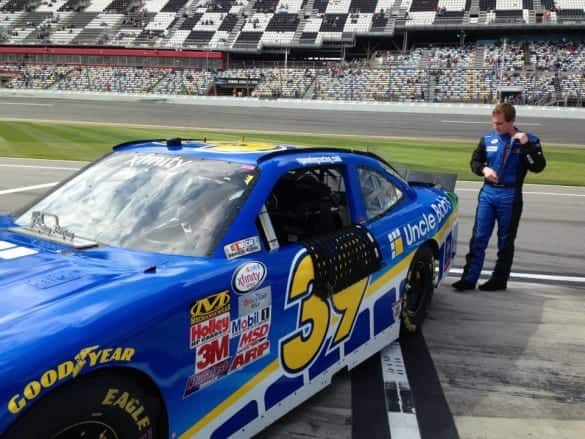 One of NASCAR’s best underdogs is gearing up for a rare feat this weekend.  Ryan Sieg will attempt to run the doubleheader of NASCAR XFINITY (NXS) and Camping World Truck Series (NCWTS) action this Saturday at Atlanta Motor Speedway, the driver confirmed in a press release. Sieg, who is running full time in the NXS, will run the No. 39 Chevrolet for his own Ryan Sieg Racing team in both races.

The doubleheader will come on the same day, as both the NCWTS and NXS compete on Saturday afternoon. Sieg has no plans to run any other truck races this season. He competed in only three truck races last season, after attempting full schedules in three of the four seasons from 2010-2013.

“This is a big weekend for me, our team, and all of our partners,” said Sieg.  “Daytona was disappointing for us so we are looking to get our season turned around in front of my hometown fans.”

The Big Green Egg, Pull-A-Part, and iHeartRadio will join Sieg as primary sponsors for the NCWTS effort. The NXS car will have sponsorship from Uncle Bob’s Self Storage, while JoeUSA.com will serve as an associate sponsor for both races.

Sieg, 27, will continue to run full-time in the XFINITY Series in 2015. The Tucker, Ga. native finished 16th in series points in 2014, with two top-10s, including a surprising third place finish in July in which Sieg pushed Sprint Cup veteran Kasey Kahne to the victory. Sieg finished 38th in the 2015 season-opening race at Daytona.