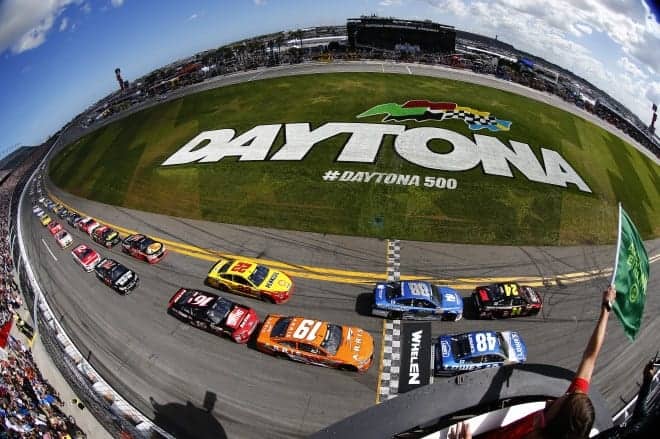 Burnouts (hot)
Of course you’ve got Joey Logano, a first-time winner of the Daytona 500. The good thing about this win for the 24-year-old is that he had one of the top three or four strongest cars all day and this was not a fluke victory. This win continues the momentum for the Penske Racing driver from last year as he was one of the final four to contend for the title at Homestead. Logano also got an assist from spotter Tab Boyd, who told him to stay on the gas after the wreck behind him on the final lap, before NASCAR eventually threw the caution. And not to be lost in all of the glory of winning the sport’s biggest race, Logano also guarantees himself a place as one of the 16 drivers in this year’s Chase For The Championship.

Sure he didn’t win and sure he would’ve liked to have seen that final lap stay green, but Kevin Harvick came within one place of winning three straight races. So, not too bad for the defending champion. What was also a mark of a champion was the way Harvick raced throughout the 500, while not leading, he waited until it was time to go to make his push toward the front.

Two keys the pre-race experience are the flyover and just how the traditional command to start the engines is delivered. In this case, you had to like both of them, with the more traditional flyover with the US Air Force Thunderbirds and then also a rousing start your engines command from actor Vince Vaughn.

Tire Rubs (warm)
One of other top three or four cars undoubtedly belonged to Dale Earnhardt, Jr. He led 32 laps and if not for what he admitted to be a bad decision on which line to try and draft with, he easily could have found himself in Victory Lane at the 500 for the second straight year. What bodes well for Junior and his fans is that after dropping back to 20th, he rallied to finish third and turned what could have been a very disappointing day into a pretty decent one.
The Daytona 500 has always been a race where the underdogs can compete, and while one of the favorites in Logano did win, it was still a pretty good day for some teams that only dedicated fans of NASCAR follow. Those results included Casey Mears in sixth, Martin Truex, Jr. in eighth, David Gilliland in 11th, Sam Hornish, Jr. in 12th and Michael Annett in 13th. To be fair, I think we will have more good results at non-restrictor plate tracks from Truex and Hornish, but it was a pretty good way for each them to start the season.

In The Cooler (Cool)
It seemed like for a while we just might get a Cinderella story in this one as Jeff Gordon led much of the first half of the race and had the most laps led with 87. It would have been quite the scene had the driver of the No. 24 won in his final Daytona 500, but the racing gods are rarely influenced by sentimentality. So, that left Gordon, in his 23rd 500, with a 33rd place finish after getting caught up in the last lap accident.

And speaking of the accident, there is some question as to whether NASCAR should have let the leaders race back to the finish line, given the wreck was behind them. Certainly the emotional part of a fan would like to see that happen, like it did in the XFINITY race on Saturday. But on the other hand, if there was a chance where safety could have been compromised, then NASCAR made the right move. It can’t hold a press conference like it did Saturday night to talk about how safety is paramount, then pretend it doesn’t matter in those situation. So, yes, I’m a little cool to the fact we didn’t get to see a real race to the checkered flag, but understanding why, too.

Stuck In The Pits (Cold)
It was simply a bad weekend to be one of the Busch brothers. Let’s deal with Kyle Busch’s situation first. He was very, very fortunate to come out of his accident where he hit an inside concrete wall head first to only come away with broken bones in his left leg and right foot. When watching the replay of that accident in real time, it was one of the hardest hits I’ve seen a NASCAR driver take in quite a while. Fortunately, he will eventually recover, but a compound fracture will likely mean it will be months before he’s allowed back in a race car.

The big question surrounding Kurt Busch will be if he will ever race in NASCAR again. While he will still get his full day in court, NASCAR did the right thing by suspending him. Any hint of domestic violence can’t be tolerated. It looked as though he would take this third chance given to him by Gene Haas and really make it work. Hey, and maybe he was doing that. But it sure doesn’t look good for Kurt Busch right now.

After going through two difficult years, Tony Stewart seemed ready to start this season anew as his old personality has come back to the forefront. Unfortunately, his old Daytona 500 luck was still intact too. He admitted to getting caught in the wrong spot and causing a wreck early in the race that left him with a 42nd place finish. There will be other days for Smoke, but you know he didn’t want to start out the season like this.