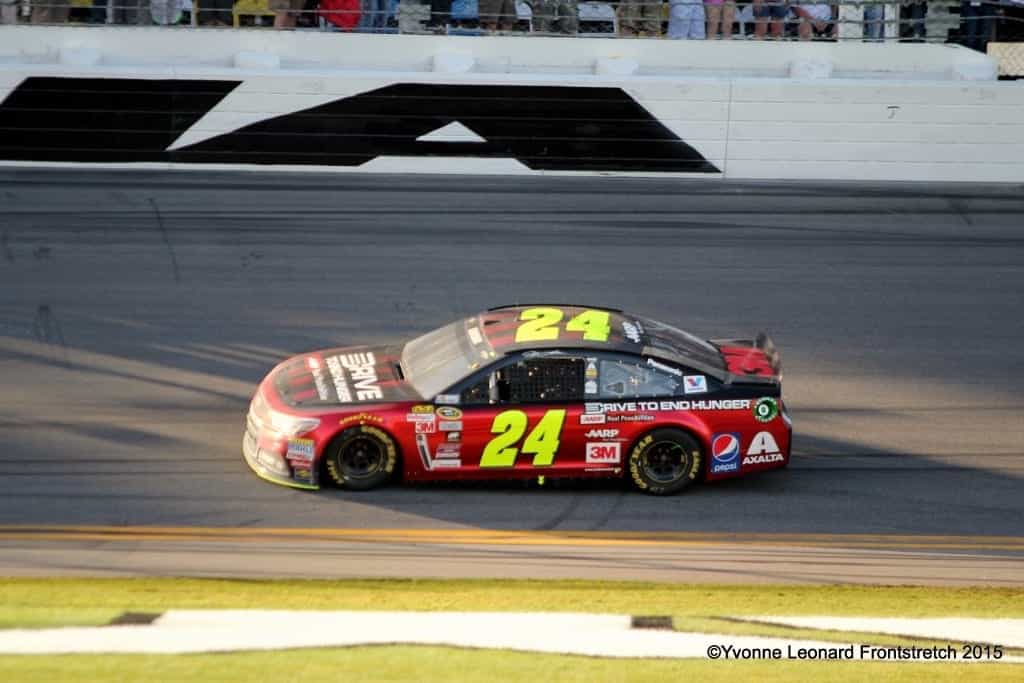 Well, I wouldn’t go and give it a six-pack. Maybe four brews. However, I did not walk out of the living room at the end of the day angry with the existence of the 2 1/2 mile superspeedway, as has become my habit every February and July. While there was a largish wreck on the last lap, the three-wide pack racing with cars bouncing off each other’s doors earned a few heart racing squeaks out of me over the last half-hour of the Great American Race. And after doing some pre-season research this year, it is that pack racing that really did garner my adoration back in the day. I got to remember what it was like to sit on the edge of the couch for hours on end as I waited for somebody to slip an inch more than they could possible control.

Sunday’s version of the season opener held most of the hallmarks of those races the broadcasts so often harkens back to, when they’re trying to convince the new viewing audience NASCAR is the end all of spectator sports. We had Jeff Gordon sit on the pole in his final appearance as a driver at the track, the Hendrick, Gibbs and SHR crowd looked like they were ready to dominate the day and then there was a plethora of young guns saddled up anxious to take away the trophy from the big boys. Two of the sport’s stars were sidelined–Kurt Busch being suspended and his little brother injured in the Xfinity race on Saturday. Danica and Denny set themselves up for potential excitement after exchanging words on pit road, post Denny spinning Danica for the nth time. So, lots and lots of storylines for the FOX crew to chew on for the day.

Follow all that up with some engine failures, the new pit road penalty system and a couple minor spins, the day moved along until we reached the crucial final 50 laps; when drivers had to stop playing with strategy and just put their nose where it wouldn’t fit. What followed was some of the best plate racing I’ve seen in years.

All of this adds up to remind me that, Daytona is a track capable of putting on a spectacular show; one that fuels the speedy demon in me, without necessarily raising the “WTF was that?” monster.  However, Kyle Busch was injured the day before in a wreck that just shouldn’t have resulted in such a serious outcome.

Yeah. Every year I and other writers spend thousands of words denigrating the plate tracks for their financial drain on the sport. Why do we run somewhere that is guaranteed to suck millions out of the operating budget? And this year we had to add the brilliant concept of knockout qualifying so we could destroy even more cars before race day arrived. The barrel rolls, frightening impacts with walls and general wadding up of steel should be enough to make us reconsider the location of NASCAR’s Superbowl. But no.

Well then, how about when a driver suffers a compound fracture simply because it was too expensive in the first place to install SAFER barriers all the way around the track? That’s an acceptable price to pay?

Every year, I walk this line of love and hate in regards to Daytona. Every year it gets harder to watch it all. I dislike being angry, and as usual, I’m angry. It just took a day for it all to settle in. The three-wide racing mitigated the reaction only so much–nothing can stop me from hitting my head when I think of Kyle Busch watching the 500 from his hospital bed.

But we’re free of the monster, at least for another five months. By then our memories will have softened toward these past ten days and Kyle might even be back in his car. Oh, wait. We’ve got Talladega to endure first. Nevermind–I’m just destined to be an angry woman as long as we run at these places.

I’m looking forward to Atlanta. It’s just as fast as Daytona (imagine that) but lacks the horror. Sounds good to me.

In his sophomore year of 1994, Jeff Gordon struggled to make his arrival in the Cup Series truly felt. While he won the Coke 600 and the inaugural Brickyard 400, he found the wall often. However, early in the season of ’95, Gordon was making it plain he had every intention of taking home his first Winston Cup this year. The Purolator 500 at Atlanta Motor Speedway was the 4th race of the year. It would be Jeff Gordon’s second win of the season leading 250 of 328 laps. This win followed two poles at Rockingham (win) and Richmond. Only four cars were on the lead lap when the checkered flag fell–something we just don’t see these days. Those four teams? Jeff Gordon, Bobby Labonte, Terry Labonte and Dale Earnhardt Sr.  All champions!

Crickets from the Race Team Alliance.