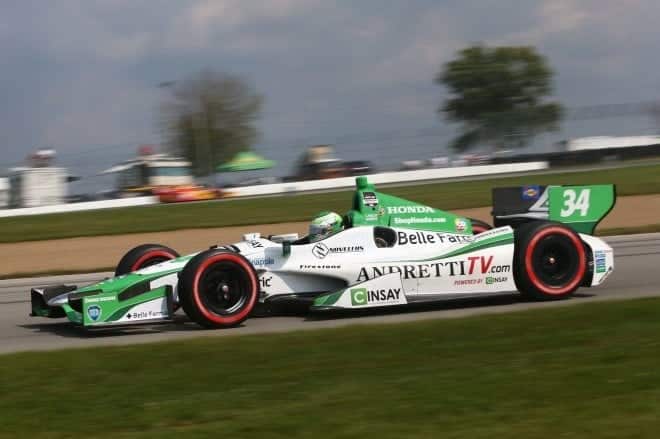 The Verizon IndyCar Series will hit the big screen on February 27th with the debut of the new Warner Bros. Film “Focus,” which stars Will Smith and Margo Robbie. Smith plays a con man who’s latest scheme partners him with a race team owner.

For help with cars and drivers, Warner Bros. turned to INDYCAR. Scenes featuring vehicles from the Verizon IndyCar Series were shot on April 12 at NOLA Motorsports Park, a new venue on the circuit for this year, with team owner and former driver Bryan Herta and 2014 Sunoco Rookie of the Year Carlos Muñoz doing driving duty.

“We were approached about providing cars for the movie and two other drivers had conflicts, so I thought, ‘What the heck; I’ll drive it,'” said Herta. “I hadn’t driven an Indy car since ’06 or the new car ever, so I thought it would be fun to get in the car and see what it feels like for first-hand knowledge.

“Obviously, movie driving is a little different than racing, but it was still good to get out there and feel the downforce, the power and all those sensations again,” he continued. “I think the contract said we couldn’t go over 100 mph. I’m not going to say we didn’t though.”

Verizon IndyCar drivers will also be on hand for private screenings of the film in several race markets leading up to the premier. Show cars will be present in Tampa, Milwaukee, New Orleans, Indianapolis and Detroit and drivers Ed Carpenter and Jack Hawksworth will introduce the movie in Detroit and Milwaukee. Gabby Chaves and James Hinchcliffe will attend in Indianapolis.

Graham Rahal and fiancée Courtney Force, a top driver in NHRA Funny Car, will attend the red carpet premier at the TCL Chinese Theatre in Los Angeles today. Rahal’s 2013 ride, the No. 15 Midas Indy car is one of the cars featured in the movie.