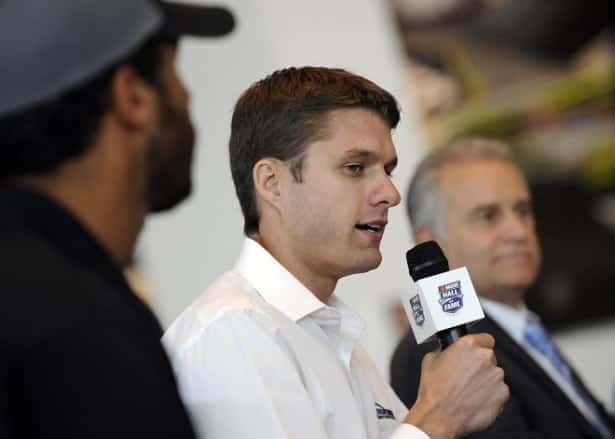 The hunt continues to find a driver to replace Kyle Busch in the No. 18 M&M’s Toyota. Tuesday morning, however NBC Sports is reporting David Ragan has emerged as the leading candidate, set to split the ride with Erik Jones.

Ragan’s emergence was a surprise with his ties to Ford. Under a full-time contract to drive the No. 34 Front Row Motorsports car, he would need to be released from his contract to jump over to JGR. Sources claim, however, the two sides are negotiating and that Ragan was spotted at the JGR complex in North Carolina early Tuesday morning. A veteran of 291 Cup starts, he has two wins, both at restrictor plate tracks and is familiar with a multi-car giant, having run as a Roush Fenway Racing driver during the 2007-11 seasons.

Frontstretch sources say Jones has already been given the thumbs-up to sub for the ride, regardless of Ragan’s signing with only official NASCAR approval needed. Jones, who is competing in his first full-time Camping World Truck Series season, has a development contract within the organization but has never run a Sprint Cup race. NASCAR needs to give clearance for the rookie to run in order to move forward.

Reports have also surfaced that Joe Gibbs Racing had gotten approval to run Elliott Sadler, a former JGR driver who’s now tied to Ford in the Daytona 500. However, the organization later decided to have Camping World Truck Series champion, Matt Crafton, behind the wheel instead. Crafton, who ran 18th in the Daytona 500 appears to have fallen back down the list of long-term options along with Sadler.

Replacement driver(s) are expected to be announced within the next day. No timetable has been set for the return of Busch to the driver’s seat.

After a day of rumors, Joe Gibbs Racing (JGR) officially announced on Tuesday that they have acquired the services of David Ragan to drive the No. 18 Crispy M&M’s Toyota in place of Kyle Busch starting in this weekend’s QuikTrip Folds of Honor 500 at Atlanta Motor Speedway.  It is unclear how long Ragan will drive the No. 18, but JGR’s press release indicates that Ragan will be in the seat for several weeks.
In addition, JGR also announced that Camping World Truck Series regular Erik Jones will drive the No. 54 Monster Energy Toyota in Saturday’s Hisense 250 for the XFINITY Series.  Busch was also scheduled to drive in the Saturday matinee at the 1.54 mile quad-oval.
Team owner Joe Gibbs is very happy that a deal could be reached between Ragan and Front Row Motorsports to allow for Ragan to temporarily move over and drive the No. 18.”

We appreciate being able to work with Front Row Motorsports and CSX for David’s (Ragan) availability,” Gibbs said on Tuesday.  “We are fortunate to be able to have someone of David’s caliber behind the wheel while Kyle recovers. Erik is a big part of our future at JGR and we will be increasing his schedule in the XFINITY Series beginning this weekend in Atlanta and seeking the earliest opportunity to provide him Cup experience. We appreciate all the support we have received from the NASCAR community including our fans and we look forward to getting Kyle back in the car as soon as possible.”

Regular driver Kyle Busch was released from Halifax Health Medical Center in Daytona Beach on Tuesday and transferred via air ambulance to a hospital in the Charlotte area.  According to a picture posted to Samantha Busch’s Twitter feed, Busch appears to be in good spirits, despite spending said flight on a stretcher.
Since Front Row Motorsports is a Ford team, permission from the manufacturer had to be sought in order to make the move.  After some pondering, the permission was given.  Later, the manufacturer released a statement, which ESPN.com’s Bob Pockrass posted on his Twitter feed.”We at Ford understand this is a very unusual situation & we are supportive of our teams, sponsors & drivers making the best decision given the circumstances,” the statement read.  “We have a great relationship with both David & Front Row Motorsports & thus will be supportive of their actions.”
Ragan’s move leaves Front Row Motorsports in need of a driver to replace Ragan for the next few weeks.  The team has not named a replacement as of this writing.
Sign up for the Frontstretch Newsletter