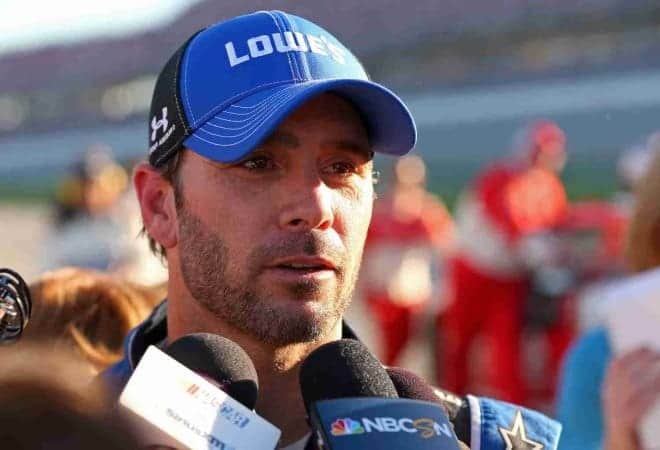 Welcome to the Frontstretch Five! Each week, Amy Henderson takes a look at the racing, the drivers, and the storylines that drive NASCAR and produces a list of five people, places, things and ideas that define the current state of our sport. This week, Amy has a few drivers who need a strong showing this weekend in Atlanta—and the coming weeks, all for very different reasons.

When the 2014 season started, Stewart was struggling to come back after breaking his leg during a sprint car race in the summer of 2013. He was out of a racecar for more than five months after his injury, enduring several surgeries, and immediately after his return, Stewart was obviously not 100 percent, running inconsistently, with just two top-5 finishes by midseason. To make matters worse, Stewart was involved in a fatal sprint car accident last summer and missed three more races. By the time the season was over, he amassed just one more top 5 and for the first time in his certain-to-be Hall of Fame career, didn’t win a single race.

Stewart, who turns 44 this summer, finished 42nd in the Daytona 500 after contact with the wall early in the race. His inconsistent performance last year raises some valid questions about whether he can overcome the injury from nearly two years ago. He may own his own team, and his three titles certainly give him a little leeway with sponsors, but they won’t wait forever. Jeff Gordon, the same age as Stewart, is retiring at the end of this year, and that also has some privately wondering how much longer Smoke will stick it out if he’s not competitive. A strong performance this week would give a much-needed morale boost and send a message that he’s not done quite yet.

Johnson didn’t have a bad Speedweeks, with a win in his Budweiser Duel and a fifth-place finish in the Daytona 500, but the real NASCAR season starts this week and Johnson is coming off the worst season of his career. Johnson had never finished outside the top 10 in points before last year, but limped to an 11th-place points finish last year. His No. 48 team was clearly off their game.

Here’s the thing for Johnson: a seventh title is not a foregone conclusion. Remember, there was once a time when everyone thought Jeff Gordon was a shoo-in to reach and eclipse that record. Without a change in the points format, he might have, easily. Sound familiar? The new format makes winning a title much harder and one bad race now means more in terms of winning or losing the title than 36 great ones. For Johnson, that means his team needs to hit their stride sooner rather than later and find solid strategy that will work in the fall. Otherwise, Johnson, who turns 40 this year, may miss another opportunity to take that elusive seventh title.

Ragan moves from his underfunded Front Row Motorsports ride into the elite No. 18 this week, subbing in for the injured Kyle Busch. For Ragan, the next few months can provide a bit of redemption. Ragan, who once drove for the upper-level Roush Fenway organization, was released after the 2011 season despite winning a race. A top-level ride gives Ragan the chance to show that he’s still a top-level talent.

He’s a strong choice for Joe Gibbs Racing. He’s outstanding on restrictor-plate tracks, and with teammates to work with and excellent equipment, he could put himself in the Chase, even if he returns to FRM before that time. He’s also capable of keeping the No. 18 in good shape in owner points, which is important for qualifying purposes if it rains or if the team does need a provisional spot to make a race somewhere along the line.

Actually, if Ragan doesn’t have a top finish right out of the box at JGR, that’s no reason to think he was a bad choice or that he won’t get some good results. Remember, cars are set up weeks in advance and team chemistry isn’t instant either. A great run at Atlanta would certainly look good for Ragan, but there’s no cause for panic if it takes him a couple of races to get in the groove.

Keselowski didn’t have a bad points season, and he isn’t in a slump; he just had a disappointing Daytona 500. He’ll likely be a title contender this year. Still, a strong finish a week after another Daytona disappointment would be good medicine. Team Penske showed their collective strength last season and they’re without a doubt a strong title favorite this time around. But as hot as he was Sunday and late last year, Joey Logano could leave his teammate in the dust if he hits a streak. Keselowski doesn’t need to fire a shot back this week in order to prove he’s a contender, because he already is…but don’t think he isn’t going to try just the same.

Hamlin had a great 500 and is the sport’s top restrictor-plate racer right now. He also has fallen just short of a couple of titles now and there’s a definite impression that he’s low man on the Joe Gibbs Racing totem pole. Add to that that his contract is up at the end of the season and Hamlin needs to get his groove on. Hamlin has had health issues in recent seasons as well as some inconsistent performances. Is it bad enough to cost him his ride? Maybe, but it’s to Hamlin’s advantage that there aren’t any potential free-agents who are a real threat. Unless JGR is able to pry Jimmie Johnson away from Hendrick Motorsports (unlikely), there aren’t any drivers likely to be available who are better than Hamlin, and JGR doesn’t really have a development driver ready.

Still, in a contract year, Hamlin needs to turn it on every week, all year long. A lone win on a restrictor-plate track like he had in 2014 won’t cut it.

Frontstretch.com is looking for a talented and motivated individual to fulfill the role of the site’s webmaster. See our job page for more information.

atlanta needs a good showing at the race. we have winter weather moving in to atlanta today. just heavy rain in hampton, ga where track is…however, right now there’s a 50% chance of rain on race day and rain the first half of next week.

too early in the season to have a race here.