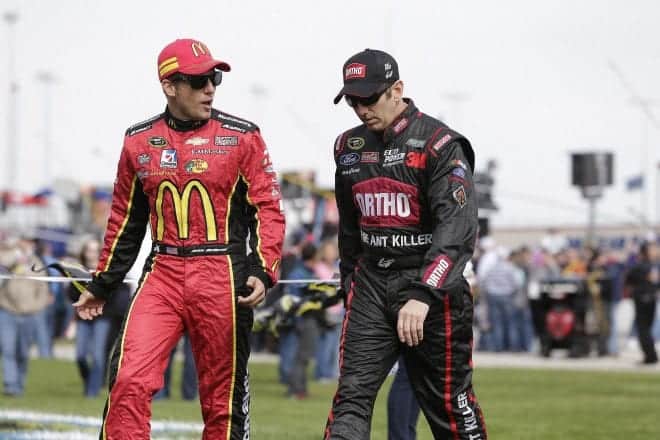 David Ragan and Regan Smith have the opportunities of a lifetime: longer-term rides as substitutes in the Sprint Cup Series.

Now, that’s certainly true of Ragan, who will fill in for Kyle Busch in the No. 18 for Joe Gibbs Racing for several races until Busch’s recovers from his Daytona injury. Meanwhile, Smith has been the replacement for two weeks now for the other Busch brother, with Kurt Busch suspended indefinitely by NASCAR, but his future is a bit more unknown; Busch could return, or the team could opt for a different driver.

Either way, one thing’s certain: both are entered at Atlanta Motor Speedway this weekend, and both have a shot at a NASCAR Sprint Cup win.

But what are their odds?

Well, not high. Look no further than last weekend for details there; though Smith and Matt Crafton, the latter the sub for Kurt Busch that weekend, didn’t run poorly, they weren’t too close to winning, either. The list goes on of other drivers, one-offs or otherwise, who have experienced middling results in a high profile ride while keeping the seat warm for another – or after having taken over when a racer was fired, in some cases. Whether it’s because it takes a bit to get situated in unfamiliar territory or someone flat ran out of talent, NASCAR substitutes are usually an intriguing story, but not much beyond that.

But there are exceptions. Instances where the replacement rises to the top, beating drivers who have been with their teams for years. Familiarity trumped by a damn good story.

When Jamie McMurray first came to the Sprint Cup Series, it was as a rookie, having never driven on the circuit prior to his debut at Talladega Superspeedway for the 30th race of the 2002 season, replacing an ailing Sterling Marlin. By his second race the next weekend at Charlotte, he was a Cup winner, nosing out Bobby Labonte for the trophy and the distinction of the smallest amount of starts before one’s first Cup Series win.

While McMurray came into his ride out of an injury, Darrell Waltrip did so due to a firing. It turned out to be one of the best moves of his young career. The driver, then 28 years old, had been piloting his own No. 17 before August’s Talladega 500, even winning a race, but received a call then that set him on the path to superstardom: a ride in DiGard Racing’s No. 88, as the team had fired Donnie Allison. By Richmond, he was a winner in the car, his second of 84 victories in a Hall of Fame career.

Kevin Harvick rose to the occasion as a necessity; after Dale Earnhardt’s death in the 2001 Daytona 500, his former No. 3 Richard Childress Racing Chevrolet needed a pilot, and Harvick was a raw but effective choice. After all, he was already driving for Childress in the series below and was likely to make it to Cup anyway. He solidified his standing by winning his third time out at Atlanta – plus one other time that season.

Dale Earnhardt won the 1979 Rookie of the Year title despite missing four races due to a broken collarbone. His replacement for those races? None other than fellow future Hall of Famer David Pearson, who had quit the Wood Brothers team earlier that year. He responded by winning the Southern 500 for his temporary team, as well as scoring a pole at Michigan. Not a bad four-race streak.

Richard Childress Racing experienced two major personnel changes in 2001. A head-first wreck at Chicagoland Speedway sidelined Mike Skinner, leaving the No. 31 for the team up for grabs – and taken happily by Robby Gordon, who was without a full-time ride after starting the year with Morgan-McClure Motorsports. He responded with some so-so results, including two DNFs, but won nonetheless in the season’s final race at New Hampshire Motor Speedway for his first career Cup Series win, a testament to never counting out a down-on-their-luck driver if the equipment’s still solid.

Tiny Lund in the Daytona 500 in, I believe, 1963. Rescued Marvin Panch from a burning sports car and the Wood Brothers tapped him to drive in the 500 — and he won. I think on one set of tires. The best of all those stories!