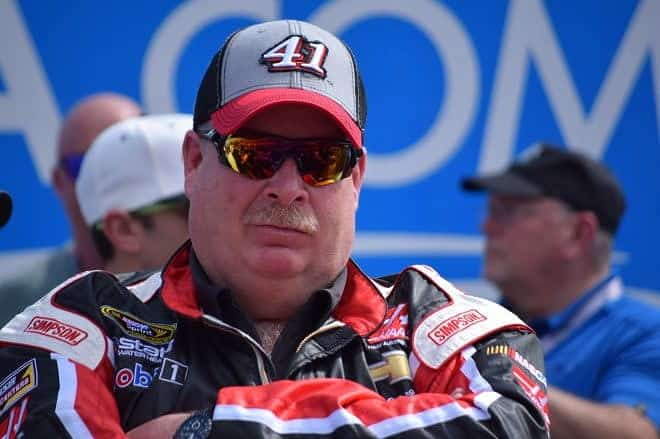 Tony Gibson had a very busy Daytona. He started with Kurt Busch behind the wheel and landed a 12th-place finish in the qualifying duel. Busch was then suspended indefinitely and Regan Smith was put in the car. Refitting the car for Smith and prepping it for the 500 consumed his time Saturday, so the race was a welcome break from the insanity leading up to the race.

This week Gibson heads to Atlanta for a NASCAR sanctioned, open test to give teams a feel for the new rules package. Gibson took a break to do Tech Talk about the 500, Atlanta, downforce and preparing for the new rules enforcement on pit lane.

Mike Neff, Frontstretch.com – Needless to say you had a busy week in Daytona. How do you feel it turned out after all things had shaken out and the checkered flag flew on Sunday?

Tony Gibson – We ended up OK considering the circumstances we were under there. I thought Regan did a really nice job. We survived and didn’t tear the car up and we ran pretty decent. We had a pretty hard time with the traffic and stuff. It was three-wide most of the time and it was just really hard. I think we got up to 11th one time but it was just so hard. The pack was three-wide the whole day pretty much. Then it turns into a survival thing, where we really didn’t want to tear anything up we wanted to make sure we finished. We certainly wanted to finish in the top 10 but it just didn’t materialize there at the end. We weren’t fortunate enough to be in the right line, in the right place. We finished 16th and we were happy with that. It had one little bitty scratch on it. Pretty pleased in general. If you come out of Daytona with a wreck or a DNF it is really hard to make that up. So, we logged some good points and feel pretty good about it.

Neff – It seemed like, at the front of the pack, that unless you had a serious push from someone to get a huge run, getting by the leader was incredibly difficult. Is it because of the package that we have at the plate tracks or is it just the drivers have become so good at side drafting?

Gibson – I think it was just different. The package is the same one we’ve had, none of that has changed. The deal was the drivers were kind of calmed down from what was going on earlier in the week. So, no one pushed the issue with slamming into guys and all of that kind of jazz. Everyone pretty much seemed to just freaking ride in line. It was really hard to get a move on someone because, even when they were two-wide the leader would block the outside line and then get back to the bottom. When that happens, when the guy moves up to block the outside lane, it slows that lane down and they lose their momentum. When they slow down it is like an accordion and then that guy moves back down to the bottom and picks up that seam and pulls the inner lane. You saw that a lot on Thursday too. We had some really good runs with Kurt there on the 48 (Jimmie Johnson). Every time we would go to pass him he would pull up or down and block us and screw our run up. It was really easy to stop runs and side draft and slow the motors down. When a guy side drafts and pulls right up against the right side of someone they get up against the exhaust pipes and that just stalls the motor out. It is really hard to keep that momentum. Towards the end of the race they were all three-wide. The whole pack was three-wide so you just can’t go anywhere. You may get a couple of spots but then you go back four. Then you may move up five before you drop back six. It is really difficult to make moves.

Neff – Atlanta is the first race with the new rules package. Did you get to test that much during the end of the year before the ban kicked in?

Gibson – We did, we actually tested last year, any time we had a team test, we’d switch over with about two hours to go in the test, on the second day. We would switch to this package and run it some and work with it. We were fortunate enough to work on it with Kurt at the Homestead test last year. Then we went to the Vegas tire test this year and did the tire test out there with this package. We’ve got some time on it. Nobody has any race time on it with a group of cars in a pack and restarts and all of that, but we have a little bit of time on it.

Neff – You talk about tires at Vegas, tires are always a premium at Atlanta with the roughness of the surface. With the downforce coming off of these cars will that make it even more of a premium this weekend?

Gibson – It will be. The downforce is off but the power is off too. The power seems to mask a lot of the downforce they took off of the cars. They are going to be more of a handful now than they were before. I think that was the whole reasoning behind this was that, as the tires fall off, the guys will have to use their throttle more to manage their car. Atlanta, no matter what package you take there, is just a cool race track and guys can run three different lanes. There is a lot of passing. I think you’ll just see more of that than we’ve seen before with this package. It should be pretty cool.

Neff – Some of the aero that was taken away on the front was from the radiator pan. Does that have any impact on the cooling on the car or is it purely for downforce?

Gibson – It doesn’t have anything to do with the cooling, it is purely downforce. It is the pan that connects to the backside of the splitter and it builds the jetstream under the car for the air to flow under. It knocks total downforce off with the pan being gone and the shorter spoiler in the back. It is quite a bit of downforce missing. The pan doesn’t affect cooling at all, it is separate from the duct work.

Neff – We had a couple of different teams get penalized at Daytona with the new pit road officiating. Is that something that you focused on during the off-season with your pit road coaching, knowing that it is going to be harder to get away with thanks to the new officiating system?

Gibson – Yeah, it is something that we’ve worked on. The pit crew coaches have really worked on it hard. We’ve been focused on it. Everyone is being really cautious right now on pit road until we see how difficult it is going to be. It is like anything else, once we learn how to adjust and work the system we’ll get more aggressive with the pit stall stuff. Y’know the guys leaving the wall when the car is three stalls away. It is a work in progress and, like anything else, we’ll learn what we’re up against. Guy will learn how to jump in the air and not land until the car is one stall away and things like that. We’ve been working hard at it since we found out what the rules would be at the end of last year.

Neff – This is the first race with a tapered spacer which is like a restrictor plate only different. In the past the configuration of the cowl can affect how much air gets into the engine. Are you bringing anything from your Daytona car over to the Atlanta car to take advantage of the cowl configuration to help get more air in the engine?

Gibson – We’ve been working with some of that stuff but we really haven’t found anything big there yet. It is still early in the deal and we’re steadily working on some of that stuff with the engine guys. We’ll continue to work on that too. We have a test tomorrow in Atlanta, a day early. We’ve brought some things to try and work on We’ll continue to work. There will be some small tweaks that we will be able to do but with the fuel injection it compensates so well over a very broad range of adjustability that the engine will modify to adjust to the conditions. It would have to be something pretty big

Neff – You mentioned the test, obviously you haven’t had any race experience with this car yet. Has NASCAR laid out a plan with single car runs or multi-car runs or is it up to you guys to decide how you’re going to do that?

Gibson – No, it is up to us. They just open the track and it is up to us to do whatever it is that we need to do. Very seldom do we get out there in a big pack and do it, unless it is a NASCAR test where they are running it with an agenda they have set up for us to go by. Similar to Michigan and Charlotte last year. Tomorrow it will be strictly up to the teams. I doubt there will be any pack stuff tomorrow.

What is it that Mike Neff doesn’t do? The writer, radio contributor and racetrack announcer coordinates the site’s local short track coverage, hitting up Saturday Night Specials across the country while tracking the sport’s future racing stars. The writer for our signature Cup post-race column, Thinkin’ Out Loud (Mondays) also sits down with Cup crew chiefs to talk shop every Friday with Tech Talk. Mike announces several shows each year for the Good Guys Rod and Custom Association. He also pops up everywhere from PRN Pit Reporters and the Press Box with Alan Smothers to SIRIUS XM Radio. He has announced at tracks all over the Southeast, starting at Millbridge Speedway. He's also announced at East Lincoln Speedway, Concord Speedway, Tri-County Speedway, Caraway Speedway, and Charlotte Motor Speedway.
@MNeffShortTrack
Previous Nitro Shots: Heroes and Zeroes
Next Truck Series Teams of Theriault, Lagasse Penalized After Daytona