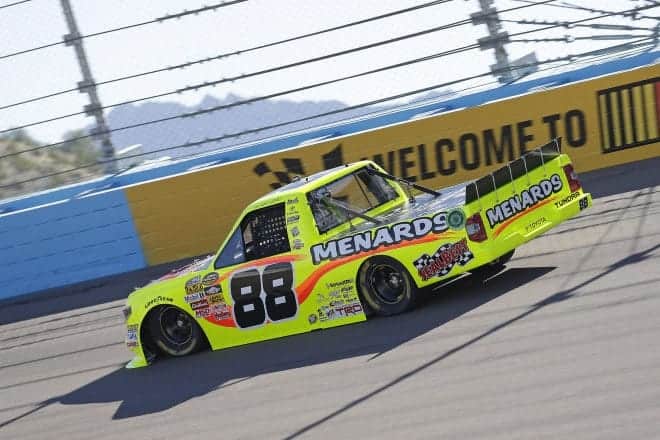 For the first time since 2011, the Camping World Truck Series opens its season with back-to-back races, rather than sitting dormant for about a month following the season opener. After a two-year hiatus, the Truck Series returns to Atlanta Motor Speedway Saturday evening in a rare doubleheader with the XFINITY Series. XFINITY will start first at 2 p.m. ET, and Trucks will follow at approximately 5:30 p.m. ET. The series ran at the 1.5-mile oval from 2004 through 2012 – including twice a year from 2005 through 2008. Fresh off of a disappointing Daytona for some and a strong race for others, there are plenty of storylines to keep an eye on heading into this weekend.

In just his 18th series start, Tyler Reddick emerged victorious, scoring his first career win, ahead of Erik Jones, thanks to a huge push from teammate Austin Theriault, who is sharing the No. 29 Ford with team owner Brad Keselowski, Joey Logano and Ryan Blaney. While very few likely picked Reddick to head to Victory Lane at Daytona on Friday night, it’s not all that surprising, given his performance in the last several races last season. In the final eight events to close out the 2014 season, Reddick finished outside the top 10 just once – 15th at Las Vegas Motor Speedway. The current points leader certainly has momentum on his side headed into the fast Atlanta Motor Speedway this weekend.

Two-time champion Matt Crafton is coming off of a solid eighth-place finish at Daytona. While it’s lackluster at best, it’s just the start of the season the driver of the No. 88 Toyota needs to start his three-peat campaign. I think the competition is quite a bit stiffer this season with Reddick racing full-time, plus Jones and the plethora of talent that has been infused into the series, but in his previous two championship seasons, Crafton has started off the year at Daytona with finishes of ninth and 13th.

Add in the high of racing the Daytona 500 for his Sprint Cup debut in place of the injured Kyle Busch, and the defending champ is riding a high like no one else in the series at this moment.

“There’s nothing like getting a phone call at 7 o’clock at night, saying you’re going to race in the Daytona 500 tomorrow, are you ready? ‘Oh I’m absolutely ready, I’ve been waiting for this my whole life,’” Crafton said of the late call to pilot the No. 18 Toyota for Joe Gibbs Racing.

Last season, Kyle Busch Motorsports dominated the mile-and-a-half tracks, winning seven of the eight events. Last fall, Erik Jones, who pilots the No. 4 Toyota for the organization full-time this season, scored the win at Las Vegas Motor Speedway. He looks to take the momentum from his runner-up finish last Friday all the way to Victory Lane on Saturday. But we can’t forget about his teammates Justin Boston and Daniel Suarez.

Boston is fresh off of a disappointing 29th-place finish in which he completed just 18 laps Friday night after being involved in an early wreck and later bringing out a single truck caution. The 25-year-old would love nothing more than to go into the month-long break between now and Martinsville with a better finish. Meanwhile, Suarez finished ninth and on the lead lap on Friday night but wrecked out of the XFINITY race on Saturday.

Two Truck Series teams were penalized Wednesday for rules infractions found during post-race inspection at Daytona on Friday. The No. 20, piloted by Scott Lagasse, Jr. (finished third) and the No. 29, driven by Austin Theriault (finished fourth) were both levied P2 penalties per the 2015 rule book. Crew chiefs Doug Howe and Chad Kendrick were fined $2,500 and place on probation through Dec. 31, and owners Bob Newberry and Brad Keselowski, along with their respective drivers, were penalized ten owner and driver points. Both teams were found in violation of sections 12-1 (Actions detrimental to stock car racing), 20.14.5 (Jack Screws: Monoball(s), excessive taper, bevels, or other devices on the end(s) of the front and rear jack screws will not be permitted) and 20.14.5.2 (Rear Jack Screws: Rear jack screws must have a minimum 0.875 inch flat surface, perpendicular to the rear jack screw, for attachment of the rear upper coil spring mounts).