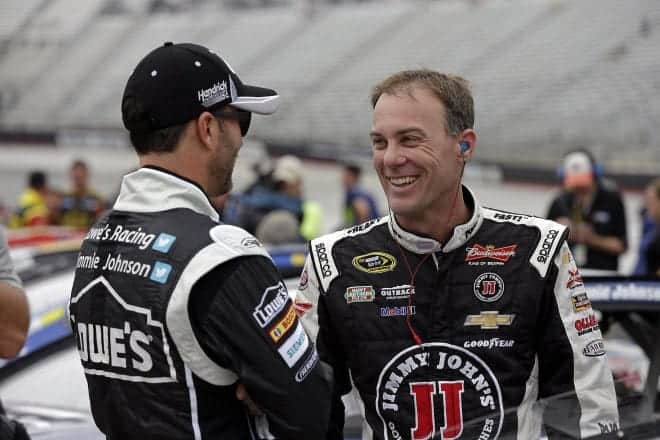 Let’s talk a little NASCAR Fantasy Live, shall we? The main rules of the game involve picking five drivers while staying within a $100 salary cap. You also get two bonus picks of a winning driver and a winning manufacturer for 30 and 10 points, respectively. How do you collect points? Well, you get .5 points for a lap led, .5 points for the fastest driver each lap, and other points are awarded for finishing position based on the NASCAR points system and, finally, place differential.

Well, we picked the top two drivers last week, but needed a little help from Brad Keselowski and Matt Kenseth to make our week fantastic. As it was,  most drivers made it through without a big catastrophe, and when it comes to restrictor plate races that’s 80% of the battle. Thankfully, we are back to a mile-and-a-half track this week, NASCAR’s bread and butter where we can use our insights and data to better predict some of the action. Surely, at a mile-and-a-half there will be less unpredictability than a plate race, right?

Kicking off the weekend, it looks like we are back to a bit of qualifying nonsense again. Normally at this point, I would be telling you about the practice data, who was fast over a short run and who was fast over a longer run; instead, I’m going to tell you who couldn’t make it through tech and will start based on points or a past champion’s provisional. The drivers in that group fantasy owners should care about are Jeff Gordon, Jimmie Johnson, Kenseth, Regan Smith and Tony Stewart. So, how does that change perspective this week? We’ll again be picking some “name brand” drivers starting at the back to score those place differential points.

That being said, there are 362 lap led/fastest lap points, so at a race like this I tend to throw them in together because the leader is generally the fastest car. This simple fact means we also need to pick out the person we think will lead the most laps. I tend to look at lap trends throughout practice runs, especially on a track like Atlanta that has large falloff in lap times during a run. You can also pair historic data to make those kinds of choices. Like last year, the Penske cars were great on short runs but tended to fall off on the long runs; I expect long runs this week.

With all of that being said, let’s get to the picks.

Gordon’s car didn’t make it through tech,  so he starts 35th. All of the Hendrick (and Hendrick-ish) cars looked pretty good over a long run in the practice sessions Thursday, the first real test of the sport’s 2015 rules package. Gordon looked really fast on several of the mile and a half’s last year and I expect that to continue this year. Jeff said about qualifying today, “it’s a big letdown for me and our series.” That may be true, but it’s a big upside for our fantasy teams this week. Roll with Jeff on your team and soak up those place differential points.

After the trail of smoke that Kevin Harvick put down in practice, the smart money will now be on Joey Logano.  I feel Harvick still has the best car, however, starting shotgun on the field with an official starting spot of 2nd makes him a little too big of a risk to take.  A thing I’ve learned playing this game over the last few years is you want to minimize risks while maximizing points.  We are trying to score a double every week, not a home run every fourth race. If you want to be risky and think Harvick will lead 150 laps feel free to leave him on your secondary team, I’ll be doing that with a few side teams.

I was tempted to go with Matt Kenseth here, but I just liked the look of the long run speed of Johnson. If you decide to stick with Kenseth to keep those extra 50 cents, I can’t really fault you for that. Last year, Johnson burned me nearly every time I picked him, but this year I smell a change in the air. Johnson starts 37th and should move up through the field. Let’s see if the horsepower reduction and the new downforce package have Johnson back to his six-time form. Maybe that black cat ran in front of Johnson last year, too…  Did you know the cat’s name is Shaky Leg and lives behind the ticket office at AMS?

There is a thing in Fantasy Live called the “points valley.” Basically, if you’re a driver starting between 9th and 17th, you are too close to the front to really score any great place differential points but you are too far back to lead laps. I try to stay out of the points valley, typically but Ragan starts 17th. For me, picking him is purely a defensive move that must be made since Ragan has been announced to run the No. 18 car for at least several races. Currently, he is valued at 9 bucks and for sure will increase in value. Picking Ragan now will allow you to leave your competitors in the dust moving forward.

Much like David Ragan, this pick is one that you must make. Last week, Smith jumped $2.50 in price and should jump again this week. He starts 41st and that is a great bonus for players. The sticking point here is that Smith is still in the car on a week-to-week basis, mirroring the future of the entire No. 41 team. Gene Haas is tight-lipped on plans moving forward so at the moment, we will just have to ride it out. That being said, at $7.50 and starting 41st, you really can’t go wrong even if Smith isn’t in the car next week.

The obvious wrench to be tossed into the cogs here is Joey Logano. I feel that if there are several cautions, especially close to the end of the race, Logano should be more of a factor, continuing his strong 2015 start. Still, Harvick appears to be the top choice, keeping the momentum from last season rolling.

I really feel Hendrick Motorsports and its affiliate cars are the ones to beat this week, even with several of them starting in the back. Atlanta will tell us if they’re the ones fastest out of the gate with the different rules tweaks.

Great assessment! I couldn’t agree more on the analysis of KH and JG! Also JJ continually burnt my fantasy teams as well, but he is hard not to pick based on the data he always shows. Great stuff!