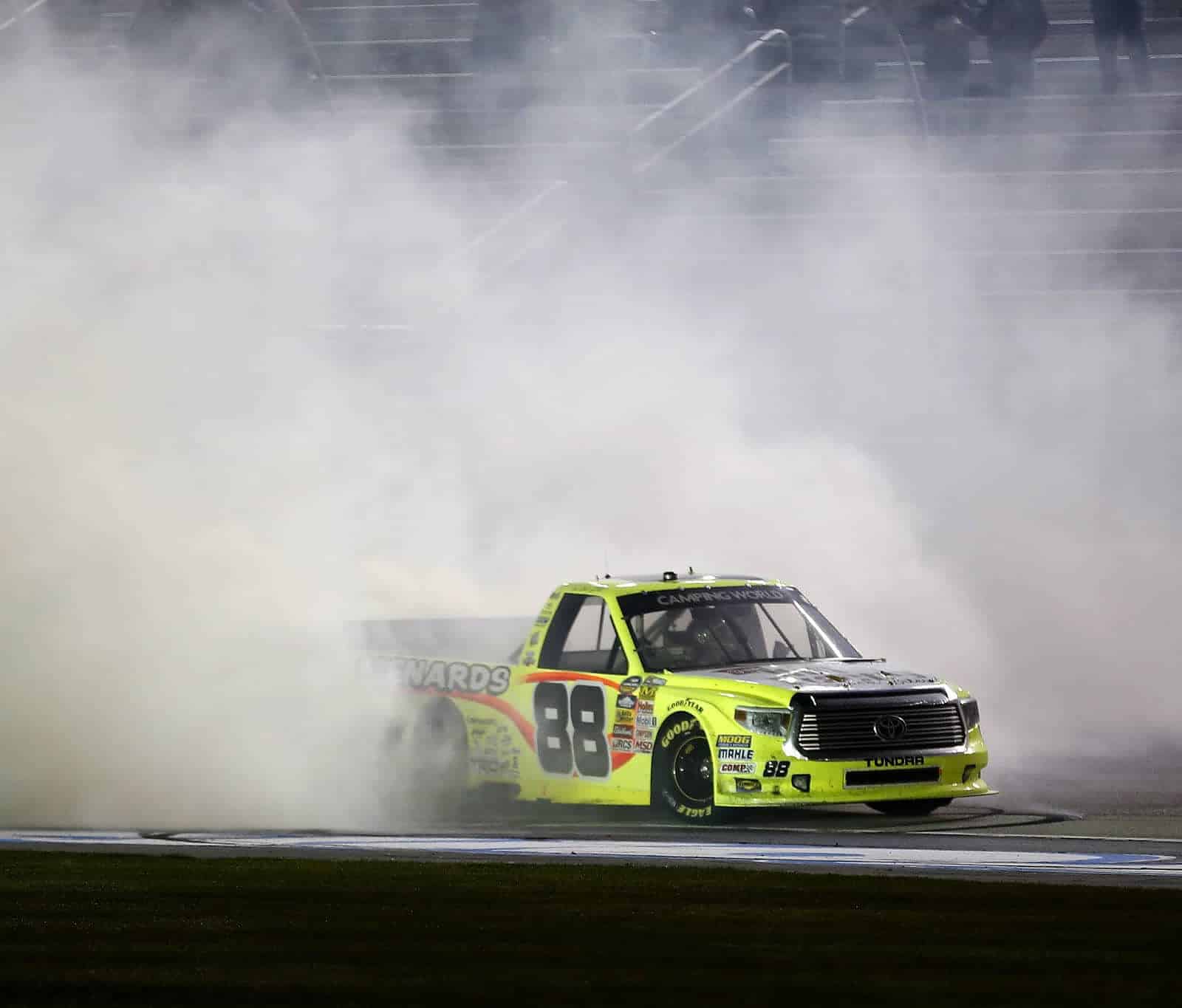 In a Nutshell: Matt Crafton made a statement in the Truck Series’ return to Atlanta Motor Speedway after a two-year hiatus. He took the checkered flag 8.752 seconds ahead of Ty Dillon to win the Hyundai Construction Equipment 200 Saturday evening. Crafton led twice for a race-high 85 laps en route to his first win of the year. Polesitter Ben Kennedy, Daniel Suarez and Daytona winner Tyler Reddick rounded out the top 5.

Who Should Have Won: Matt Crafton. The No. 88 Toyota was strong from the moment in unloaded at Atlanta Motor Speedway. Able to run right on the yellow line throughout the three-hour practice session on Friday and the entire event, it was really Crafton’s race to lose. Having struggled a bit in qualifying, the two-time champion was forced to work his way through the field from a 15th-place starting position.

When qualifying completed for Saturday evening’s race, it was Brad Keselowski who walked away smiling, having posted a lap at 177.045 mph, beating out Ben Kennedy, who was the only driver to immediately hit the track when the final round of qualifying began.

But after further review, NASCAR determined that Keselowski’s did not cross the start / finish line for his fast lap before the timer expired on the qualifying session. Having his time from the final round disallowed, Keselowski was dropped back to a tenth-place starting position, and the pole was awarded to Kennedy, giving the sophomore driver his first career pole. Running laps similar to leader and eventual winner Matt Crafton, Kennedy drove his No. 11 Red Horse Racing Toyota home to a solid third-place finish, matching his career-best from Martinsville Speedway last March.

Timmy Hill Joins MAKE Motorsports… or Does He?

MAKE Motorsports announced on Friday that Timmy Hill would be one of multiple drivers to pilot its No. 1 Chevrolet, taking the wheel for Atlanta Motor Speedway this weekend (Donnie Neuenberger drove the truck in Daytona). But come Saturday morning, the team posted a rather cryptic message on its Facebook page announcing Morgan Shepherd behind the wheel of the No. 1 for the evening’s race.

Hill followed up on Twitter to clarify the situation… sort of.

Things didn't work out as we all hoped this weekend. I will not be driving in the race this evening. Thanks everyone for the support!

To clarify, I made the decision after practice yesterday to not drive the Truck today. I do appreciate all the support and….
(1/2)

I hope to have something to announce very soon on some upcoming races!
(2/2)

There’s really no clarity in what happened to cause the driver change other than Hill’s assertion that he made the decision to step away from the truck. The only assumption that could be made is that perhaps a lack of speed left Hill disappointed, but that would only be a guess. During Friday’s practice session, Hill’s fastest lap came at 165.730 mph, besting only Norm Benning’s self-funded ride. Shepherd qualified the truck 30th and went on to finish 27th, 12 laps behind the leaders.

As if the theft of Team Xtreme Racing’s No. 44 car, the theft of two supercross bikes and Denny Hamlin‘s motorcoach being hit while parked in the lot, Jennifer Jo Cobb had her own Atlanta drama. According to a report from FOXSports.com, a team van was the victim of a hit and run accident in the hotel parking lot around 2 a.m. Saturday morning. According to the report, Cobb heard a loud bang and went to investigate. When she found her personal car was fine, she went back to bed, but the team found its van damaged in the morning before heading to the track. It was reportedly one of three vehicles damaged in the incident.

* A few drivers suffered tire issues on Saturday evening. Timothy Peters was the first, pitting just before Cody Ware‘s hard wreck to bring out the third caution. Trailing the telltale rubber strings, Peters ended up having three right front tires fail, and he said post-race “coming to the white flag, the right front went out again.” Joe Nemechek was also seen with the rubber strings trailing out of his No. 8 Chevrolet, and Brad Keselowski pitted under green just in the nick of time with a corded right front.

* Two trucks withdrew from the Hyundai Construction Equipment 200 entry list, leaving the series with its first short field of the season when only 31 trucks started the race. WinTron Racing withdrew its No. 35 Toyota, and Empire Racing pulled its No. 82 Ford that was scheduled to be driven by Travis Kvapil.

No. of rookies in the race: 13 (add Jordan Anderson, Brandon Brown, Daniel Suarez and a debuting Garrett Smithley)

No. of rookies to finish in the top 10: 2; Daniel Suarez, finished third; Erik Jones, finished seventh

Points Update: Thanks to a fifth-place finish, Tyler Reddick left Atlanta Motor Speedway with a slim two-point lead over race winner Matt Crafton, who jumped three spots in the standings. Erik Jones dropped on position to third and sits three markers behind the leader. Johnny Sauter, who moved up two spots, and James Buescher, who jumped seven positions on the strength of an eighth-place finish, round out the top 5.

Bryan Silas dropped two spots to sixth following a 21st-place finish. Meanwhile, Ben Kennedy, who finished third, jumped 15 positions to seventh as part of a three way tie. He shares that position 29 points behind the leader with Ray Black, Jr., who dropped five spots when he spun in the early stages of the race and Joe Nemechek, who is up six positions. Rookie Korbin Forrister, who dropped three spots, rounds out the top 10.

“I was really, really disappointed in qualifying, but (my truck) didn’t have a lot of single-lap speed by itself. But I knew, once they dropped the green and this thing took off and it ran three laps, I’m like, ’We’ve got something for these boys – they’re in trouble.’ This is my favorite race track, by far. You can search, and you can move around so much. Now that I’ve got this win, it’s an amazing feeling. We just tried to stay ahead of [the changing track]. We knew when the sun started going down that the track was going to change quite a bit. I have had that racing experience before and gotten really, really free at night. We just kept tinkering away at it, tinkering away at it… we made all the right adjustments.” –Race winner Matt Crafton

Man what a day 3rd in the @NASCAR_XFINITY race and 2nd in @NASCAR_Trucks great Saturday now it's time for a @Yuengling_Beer.

Thanks to all for your support!! It was a day full of learning in one of the most difficult tracks for me so far!! P14 Xfinity y P4 Trucks

Up Next: After back-to-back races to open the season, Camping World Truck Series teams will sit on the sidelines for about a month before heading off to Martinsville Speedway on Saturday, March 28. Last season, Matt Crafton took the win under caution. Coverage for the Kroger 250 begins at 2:30 p.m. ET on FOX Sports 1; the race can also be heard on your local MRN affiliate or SiriusXM Radio channel 90.