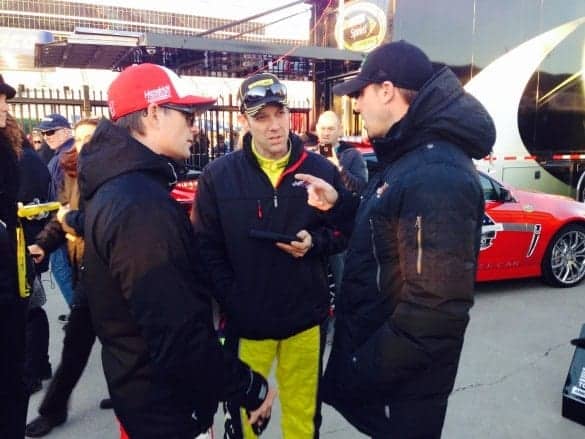 HAMPTON, Ga. – If you missed ‘Inspection-gate’ because you were too focused on finding Travis Kvapil’s stolen No. 44 Sprint Cup Series car so you could score hot passes to every race of the year, there was another issue going on at Atlanta Motor Speedway that needs to be addressed going forward.

Somewhere along the lines, 19 cars failed qualifying inspection on Friday. The numbers are a little fuzzy because some of the cars were able to get their problems fixed and make it through the line on their second trip. However, that wasn’t the case for Jeff Gordon, Jimmie Johnson, Matt Kenseth, Regan Smith, Landon Cassill and Tony Stewart to name a few. They didn’t qualify at all.

Jason Ratcliff, crew chief of the No. 20 Dollar General Toyota driven by Kenseth, said they had camber issues that were outside the tolerances allowed by NASCAR. It wasn’t a lot, but it was enough to fail.

“I think we were .03 degrees but it is .03 too much,” Ratcliff said. “It’s an easy fix. If we didn’t have to wait so long we would already be out there and have it fixed but unfortunately we have about 16 or 17 other guys with the same problem.”

While Ratcliff seemed at ease with the issue, which he admitted would cost the team a chance at qualifying, several others weren’t so calm.

Jeff Gordon scolded NASCAR and truly believed something was wrong with their equipment.

“I have never seen anything like this in my life,” Gordon said. “They should have recognized they had an issue. When you have this many teams having issues going through, I am sorry, there is something wrong with their system or there is something wrong with the amount of time that they a lot to get through. I am embarrassed for our series right now.”

In response to the criticism, NASCAR brought out Richard Buck to explain the inspection process and what happened in the garage. He said teams were pushing the envelope and that it is not uncommon to have issues at the first non-restrictor plate race of the season.

Sure, teams were pushing the envelope. That’s what teams do. They try to get the edge over their competitors and ensure they have every possible – legal – advantage they can get. That is what race teams are supposed to do, but having top-tier teams miss out on qualifying is definitely not the status-quo.

So, who dropped the ball with regards to qualifying inspection SNAFUs at Atlanta Motor Speedway?

Of course, maybe none of it matters because Johnson won the race and he started in the 37th position. He clearly proved that drivers can start from anywhere on the track and get to the front. In fact, isn’t that what we hear every single time a driver has a bad qualifying run? Maybe, we should just do away with qualifying altogether and just have the drivers draw ping-pong balls to see where they will line up on the grid. Since the series is heading to Las Vegas next week, it would almost be fitting to have everything riding on a game of chance.

What a way to start your last full time season of racing. Good to see Gordon not holding back. Glad he didn’t get hurt like Kyle. And, his driver and car won too. So I guess that means things are back to normal in Nascar. Yeeha.

The only reason people have their shorts in a knot about the inspection fiasco is because four Hendrick cars could not pass in time to run qualifying laps. But, all is well. The Hendrick cars dominated and finished one-two-three, with the winner being one of the inspection-failing cars. Now, everyone will love this new rules package!

Sorry Jeff but if the teams would present “LEGAL” cars for pre-qualifying inspection, there wouldn’t be any problems now would there? It’s up to the teams to present cars that can pass inspection, not NASCAR.

Agreed. I have heard all weekend that Nascar had tech open all day Thursday if they wanted to get an initial inspection on their cars before the real tech happened on Friday. Nobody took advantage of it. I’m far from a Nascar apologist, but this one is on the teams. If you want to push the limits with the rules, there could be consequences, and there were.

My only gripe is that teams that needed to get in on speed should have been allowed to go through quicker than those teams that had provisionals and already locked into the event. Them not even getting a chance to get on the race track and forced to go home because of it was wrong in my opinion.

Sanity. Don’t bring issues into inspection and then expect NASCAR to do backflips on helping you out. Not likely to see this again since people see the cost. If NASCAR had obliged like some of the perpetually angry NASCAR fans suggest, we’d see teams playing this card far more often.

you know, i’d like to see equipment calibration records for the tech equipment. every weekend that equipment is assembled and disassembled and moved all over the country. i know where i work, when we have to move a piece of lab equipment, it must be re-calibrated before put into use.

but then this is na$car. if you don’t like it you can take your marbles and go play somewhere else.

This one is definitely on the teams, its up to them to present a legal car. But its also indicative of how little qualifying for a race like this really matters. If it was crucial they wouldn’t take a chance on missing it.