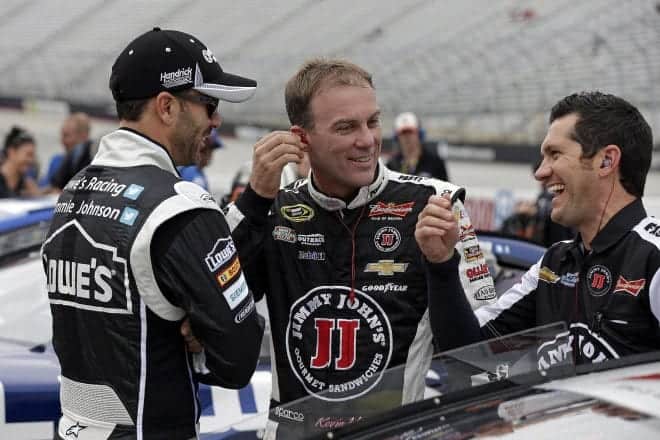 "Since you don't have anything to do this weekend, Jimmie, could you pick up a few shifts and make deliveries for me? You've almost got the right name and everything..." (Photo: CIA Stock Photography)

The fact that this victory for Jimmie Johnson at Atlanta Motor Speedway secures him a spot in the 16-driver Chase for the championship is not even the top thing on his mind, shows how big of win this really was.

After what many in the world of NASCAR called a “down year” for the No.48 in 2014, the Hendrick Motorsports Chevrolet took a stand in the Folds of Honor QuikTrip 500  to grab his 71st career Sprint Cup victory.

“We just had a great racecar,” Johnson told MRN Radio after winning at Atlanta for the fourth time. “Unfortunately how the way qualifying went, we didn’t have a really good pit stall pick and it took us a long time to get in front of the No.19. Once we did that, we were able to utilize our awesome pit crew and get our pit stops done, race for the win and get the job done today. My guys surprised me today, we were not that good yesterday and they really dug deep and figured out what I need in this racecar.”

Johnson joins Daytona 500 champion Joey Logano, as the two teams with near nothing to lose for the next 24 weeks of racing.

“If we win a second one, were definitely locked but this takes a ton of pressure off,” Johnson said.

What kept the teams and fans on their feet throughout the long event was the battles for position; preferably the fight for the lead with Johnson and Kevin Harvick.

As  Jeff Gordon, Tony Stewart, Matt Kenseth and more, started the 500-miler from the rear of the field, it was quite the show seeing the racing progress. Harvick came home in the second spot for the second straight week, leading 116 laps in the process.

“Jimmie (Johnson) ran great today, it was a lot of fun racing with him,” Harvick told MRN Radio after his fifth straight top-two finish. “We had a good race there as we got to the middle portion of the race. I just got behind on one restart there and got stuck behind the No.55 on the restart when they stayed out. Just never really made it back up through there.

“Jimmie just had the clean air and was able to get going on the restarts. I struggled on the restarts all day. All in all it was a lot of fun and I enjoyed the race today.”

The first caution of the day came out on Lap 27 when the competition caution flew. Austin Dillon blew a rear tire on Lap 48 and after some repairs, he re-joined the racing pack before blowing another tire into Turn 1, resulting in a crash that would bring him to the garage for nearly 40 laps.

Harvick would take the lead from pole-sitter Logano for the first time at Lap 87, starting a dominating stint throughout the middle stages. Johnson started to show his muscle around the 200-lap mark when he took the lead from Harvick.

Shortly after a Lap 258 restart, Denny Hamlin lost the rear of his No.11 Toyota while inside the top-10 causing him to spin. Jamie McMurray and Ryan Newman got collected along with Jeff Gordon who got clipped and punched the inside concrete wall. The No.24 car just missed the SAFER barrier which did not cover the entire inside wall.

It was visibly clear that the heat was ramping up on the banks of Atlanta. Although the temperatures in the sky were cold, the on-track action was hot enough to scramble your morning eggs.

A late restart with 20 laps to go set up an interesting game of strategy among the top runners. The leader of Kenseth stayed out under the previous caution, bringing along the Michael Waltrip Racing teammates of Clint Bowyer and Brett Moffitt.

Bowyer pulled high to avoid contact right at the drop of the green due to a missing cylinder in his No.15. However, in Turn 3, Greg Biffle lost control under Joe Nemechek and caused a Daytona-style big one, swallowing up Ricky Stenhouse Jr., Tony Stewart and Kyle Larson.

The final restart with 14 laps to go, saw one last attempt for the victory by Earnhardt Jr. and lots of shuffling for position close behind. Earnhardt would quickly pickup a piece of debris which damaged his No.88 Chevrolet, which he believes is what cost him second spot.

“It knocked the whole grille out of the car, and just destroyed the aerodynamics on the car,” Earnhardt told MRN Radio. “It cost me a spot to the No.4.”

“Greg Ives did a great job of setting up the Kelley blue Books Chevrolet,” Earnhardt said. “We struggled a little bit on Thursday but better and better each day. Our communication is really really good and he’s doing a great job cheerleading this whole team.”

Brett Moffitt, finishing eighth, made the absolute most of his one-off opportunity with MWR as Brian Vickers will return to the No.55 seat next week at Las Vegas Motor Speedway. Moffitt learned a lot through the rough 500 miles of Sprint up action.

“It’s a lot of little things,” The 22-year-old told MRN Radio. “We can all go fast in a car by ourselves but not to race around 42 other guys and keeping the car under control. Atlanta has a lot of tire fall-off so being able to run the majority of a run and still be good at the end paid off a lot.

“I cannot thank Aaron’s and Michael Waltrip Racing enough for this opportunity.”

Next week the Sprint Cup circuit heads to Las Vegas to gamble on the third round of 2015.