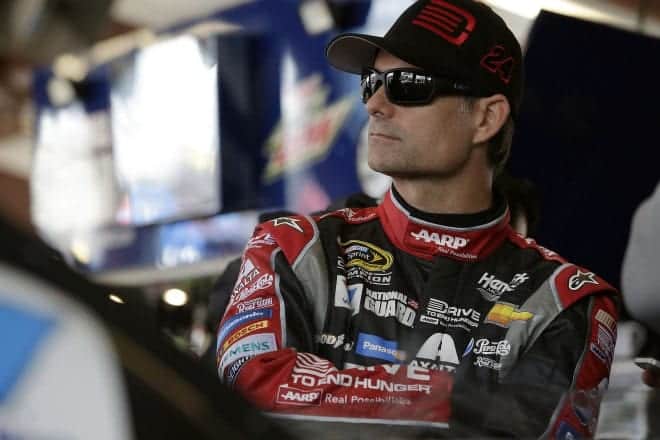 A week after Kyle Busch was severely injured after hitting a part of the wall without SAFER barriers at Daytona International Speedway, Jeff Gordon struck a similarly unprotected wall at Atlanta Motor Speedway in a hard impact.

Thankfully the results weren’t as dire or drastic. Gordon walked away from the incident without showing any problems. The difference is that when Busch suffered a compound fracture in his lower right leg and fractured his left foot in last weekend’s NASCAR XFINITY Series race—indefinitely sidelining him from NASCAR competition while he heals—many drivers, fans, media, etc. expressed frustration and outrage about the fact that there are still exposed parts of the track without some sort of safety measures in place.

The wreck at Atlanta Motor Speedway that ended Gordon’s race began when Denny Hamlin got loose in front of several other cars coming off of turn three, collecting Gordon, Ryan Newman, and Jamie McMurray. Hamlin wound up hitting Newman who then hit McMurray who slid up the track and hit Gordon. Gordon then slid down part of the backstretch and punched the inside wall. While much of that inside wall does have SAFER barriers, Gordon caught the point of the wall where the barriers end.

After exiting the car, Gordon seemed to angrily point out that section of the wall to a NASCAR official at the scene of the accident. He was then transported to the infield care center where he was evaluated and released.

“It wouldn’t have been too bad, but I found the one spot where there’s no SAFER barrier. I can’t believe it. That’s amazing to me,” Gordon told a TV reporter after being released from the infield care center. “Hopefully soon that will get fixed. That was a pretty big impact.”

This is not the first time Gordon has hit a non-protected part of the wall. In 2008, Gordon struck a point on the backstretch without SAFER barriers at Las Vegas Motor Speedway, and again in 2011 at Richmond International Raceway. Both tracks installed SAFER barriers after the impacts.

“I’m very frustrated by the fact that there was no SAFER barrier down there,’’ Gordon continued to media members. “I know it was a hard hit. I didn’t expect it to be that hard. I got out and looked and ‘Oh well, big surprise I found the one wall on the back straightaway that doesn’t have a SAFER barrier.’ ‘’

The closeness of such an impact to Busch’s injury last weekend was not lost on Gordon.

“I don’t think we can say any more after Kyle’s incident at Daytona,’’ said Gordon “Everybody knows they’ve got to do something. It should have been done a long time ago. All we can do now is hope they do it as fast as they possibly can and get it done.’’

Busch, who was sitting at home watching the race, tweeted this reaction:

Gordon settled for a 41st place finish after the crash knocked him out of the race.

While Gordon was, thankfully, uninjured, unscathed, and angrier that he wrecked more than anything involving the SAFER barriers, there is frustration present in many as the story continues to unfold. Would this have been as big of an issue had Busch not sustained an injury last week? I know it would have been for me and several others, but industry-wide it likely wouldn’t have been.

Granted, AMS did put some additional safety measures in place prior to the start of the race, such as tire packs. However, would they have done so without Busch’s wreck last week?

While I can’t say for sure, I don’t feel confident that they would have. It’s infuriating that it took a driver’s injury for tracks to get scared into actually considering installing SAFER barriers all the way around the racing surface wherever a driver may hit. No it’s not fair to expect AMS to have installed SAFER barriers in the week leading up to the race, but it is fair to be irritated with them and any racetrack that did not have a fire lit under them until something of this magnitude took place. Why did it take Busch be sidelined to compel NASCAR to take a hard look at what safety measures need to be in place at these tracks? Why are these temporary measures just now being implemented and paraded on a regular basis? These are things that should have been done a long, long time ago! Not just because the headlines dictate it!

If there is a point on the track that is not protected, the drivers will find them. Period. Thankfully the safety measures inside the car are enough to sufficiently protect the drivers for the most part, but there is still a risk as Busch’s case demonstrates. It is the racetrack’s job to control the safety aspects that are within their control in regards to their own facilities. They knew this before Daytona. So why wait?

And money is not a valid excuse. It never has been. These racetracks have invested in other expenditures over the course of the years. Why has this one not been the ultimate priority?

My frustration is not that AMS didn’t take every needed precaution after seeing Busch injured in a race. They seemed to do so based

on the resources they had available to them in short order, and that’s a good thing, My frustration—and that of others—is that these measures weren’t taken the very moment they became available. They weren’t thoroughly considered until after something bad happened … and that is ridiculous. It shouldn’t be a shock to anyone that drivers crash, hit walls, and sometimes they will hit spots that aren’t necessarily a trouble spot. But is that really a good reason to delay putting those safety measures in place? Are you willing to bet a driver’s well-being on their car’s capabilities alone?

I certainly hope not and have yet to hear a good excuse as to why these measures that NASCAR and the tracks are apparently looking into as of now weren’t considered more thoroughly and seriously much earlier. It’s that part of it that frustrates me so much. So while this rant might seem a little much considering that Gordon was perfectly fine after Sunday’s race, what if he hadn’t been? What if it’s someone else next time? What if it’s career-ending and not just season ending?

We shouldn’t even be asking those questions. This is a case of too little, too late. The best thing that’s come out of this storyline is that it’s forcing the hand of NASCAR and everyone involved to act now instead of waiting for someone else to find an unprotected piece of the racetrack. Hopefully, this will be the last season that this is even a discussion.

Yeah, NASCAR seems to always be a step behind reality. They don’t react until AFTER something bad happens.

getting tired of having NASCAR & the tracks use the drivers as crash test dummies.

Concrete walls injure and kill drivers. NASCAR knows this. Has known this for a long time. Has had the technology to fix this for a long time. Unconscionable. Obscene when billionaires begrudge drivers their best chance to survive because it costs money. And that’s all this is… a money decision.

What happened to the 4 semi loads of used tries ?