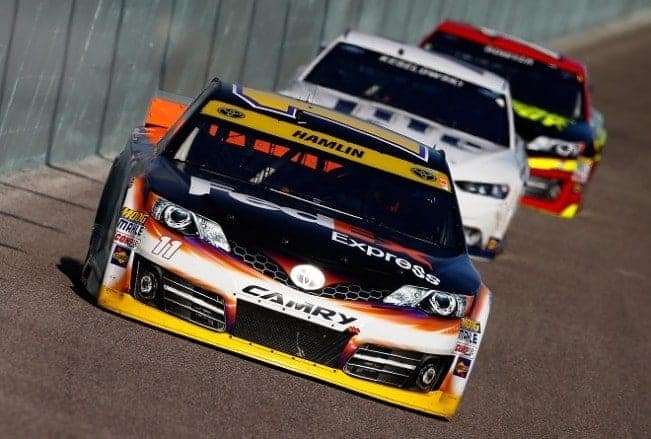 Every week, Frontstretch will scour Twitter looking for the best tweets from the drivers, NASCAR media, fans and even NASCAR personnel. We hope you enjoy these tweets from the previous week!

In case those of you don't know what Chad "Pedro" Johnston looks like….. I present Pedro pic.twitter.com/8kcjvg07HI

In this tweet, Tony Stewart is showing everyone a fictional character of what Chad “Pedro” Johnston looks like. For those of you still confused, Johnston is the crew chief for Stewart on the No. 14 Bass Pro Shops racing team. It goes to show Stewart’s sense of humor and the respect he has for the entire racing team.

The Performance Racing Network asked fans to send them questions after running out of things to talk about during its pre-race show while track drying continued before the start of the Folds of Honor QuikTrip 500. A fan tweeted a question to the booth, asking, “How does Brad Gillie keep his hair looking so perfect?” Gillie responded with the selfie above.

If you happened to be on either Twitter or Facebook late Thursday evening, you probably read a number of comments over a mysterious dress. Some people said the dress appeared black and blue while some said it appeared white and gold. Even some said they saw light blue and gold. Anyway, from this post, it appears that Danica Patrick and Ricky Stenhouse, Jr. disagreed with the color of the dress.

On Wednesday, NASCAR issued a written warning to the No. 10 Stewart-Haas Racing team for violating section 20.11.2.2.2.1.B (unapproved left-side driver heat shield) that was found during opening inspection at the Daytona International Speedway. When I tweeted the news, a fan replied with this hilarious tweet! NASCAR changed the way it cited sections and subsections of the rule book for the 2015 season.

For all of you people on Twitter, you probably follow @NASCARCasm. After the announcement of David Ragan to sub for Kyle Busch in the No. 18 Toyota, NASCARCasm sent out this hilarious tweet. Although we agree that Crispy M&M’s are delicious, we’re pretty sure this did not happen.

Hey @FrontRowNASCAR, hire me & I will dress up as a chicken for @kfc at all of the races…from the moment I show up until I get in the car.

With the No. 34 ride opening up over at Front Row Motorsports, many NASCAR drivers told the racing team why they should have the opportunity to pilot the Ford Fusion. Ryan Ellis, however, had one of the greatest responses ever. Ellis is giving a Stroker Ace movie reference.

Don't know how, but I made it 31 years without knowing what a narwhal is.

Those were the good o'days…

If you watch a lot of television, you have probably saw the Narwhal Sprint commercial. Some say the commercial is annoying, while some seems to have enjoyed it. However, based off this tweet from 2012 Sprint Cup Series champion Brad Keselowski, he’s not a fan.