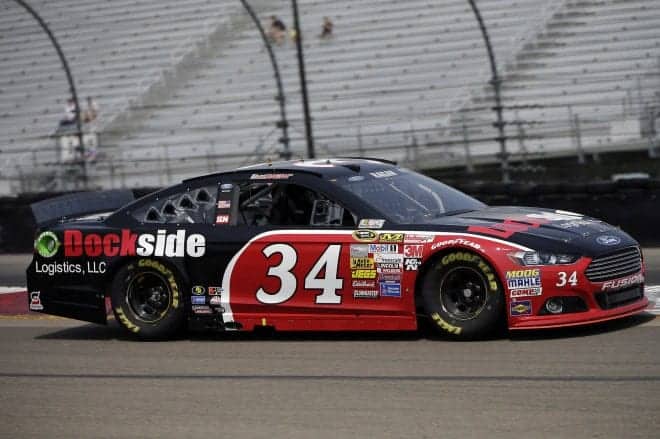 Catchfence.com is reporting this morning that Brett Moffitt, fresh off of a top 10 finish Sunday at Atlanta Motor Speedway while subbing for Brian Vickers, could be replacing Joe Nemechek behind the wheel of Front Row Motorsports’ No. 34 Ford this weekend at Las Vegas Motor Speedway. Front Row Motorsports’ normal driver in the No. 34, David Ragan, is currently driving the No. 18 Toyota for Joe Gibbs Racing for an indeterminate amount of time while Kyle Busch recovers from his injuries suffered at Daytona.
UPDATE:  On Wednesday afternoon, Front Row Motorsports announced that Moffitt will drive the No. 34 during the Sprint Cup Series’ western swing starting this weekend at Las Vegas Motor Speedway.  He will also drive at Phoenix and Auto Club Speedway (Fontana).  Moffitt is making the move with the unilateral approval of Michael Waltrip Racing
Moffitt is very happy to be able to expand his schedule.
“I’m excited about the opportunity to run some races for Front Row,” Moffitt said in a press release.  “After last weekend, I’m obviously eager to get back into a car and keep racing. I’m grateful to Bob Jenkins and his team for giving me the chance to do that. I’ll do my best to get some good finishes for them. I’m also thankful that Michael Waltrip Racing is allowing me to pursue this opportunity. I think it’s going to benefit everyone in the end.”
With Moffitt, you don’t necessarily get Sprint Cup experience, but you do get enthusiasm.  Front Row Motorsports owner Bob Jenkins is more than happy to take on Moffitt’s enthusiasm.
“We know Brett doesn’t have a ton of Sprint Cup experience, but he’s got a lot of hours behind the wheel in testing time, and he was certainly impressive Sunday in Atlanta,” Jenkins said.  “For only his eighth start, he showed a lot of poise, patience and maturity that you don’t often see in drivers that age.”
Moffitt is currently under a three-year developmental contract with Michael Waltrip Racing.  Two of his eight career Sprint Cup starts have come with a full MWR effort.  The other six starts, including his debut at Dover last year where he finished 22nd, were with Identity Ventures Racing, the Jay Robinson-led joint venture that Moffitt was farmed out to.  However, Moffitt reportedly has no exclusive deal with Toyota that would preclude him from driving Front Row Motorsports’ Ford.
If the move comes to pass, Moffitt would have to qualify the No. 34 on speed since Front Row Motorsports swapped the points of the Nos. 34 and 35 prior to the season so that Cole Whitt would not have to sweat qualifying.  Nemechek struggled in practice at Atlanta, but managed to take advantage of NASCAR’s technical inspection issues to qualify 28th.  In the race, Nemechek was caught up in a late crash and finished 33rd.   Through two races, the No. 34 team is 24th in owners’ points and a decent run Sunday will likely eliminate the need to qualify on speed once 2015 points come into use for provisionals starting at Phoenix.