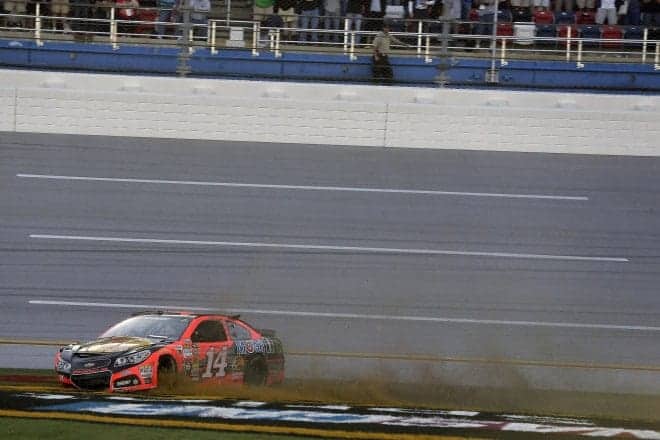 Did You Notice? … Two races into 2014, Kevin Harvick is the only Stewart-Haas Racing car with either a top-5 or top-10 finish? SHR’s struggle has been notable as Tony Stewart was off the pace at Atlanta, uncompetitive long before getting caught up in a mid-race accident. Regan Smith has run admirably, keeping the No. 41 team afloat in Kurt Busch’s absence, but he’s been little more than a midpack driver. Danica Patrick has run reasonable, posting an average finish of 18.5 but that’s far less impressive considering the two tracks we’ve been to. Daytona is one of her best, a restrictor plate opportunity to run up front and Atlanta’s a place where she’s run top 10 in the recent past.

SHR’s sluggish push out of the gate sits in sharp comparison to Hendrick Motorsports, posting three drivers inside the top 7 in points. Jeff Gordon, while stuck in 35th, has been highly competitive in both races before getting caught up in accidents not of his making. Overall, HMS has led over 250 laps in this very young season to lead any organization on the circuit; SHR, if not for its No. 4 car would have led none. Stewart, in fact sits 36th in points and is already 35 points out of a Chase spot.

How is the Hendrick knowledge not filtering on down? At this point, it appears Harvick’s team is working on an island while the other portions of the organization simply tread water. While Rodney Childers is an exceptional crew chief, the difference in performance shouldn’t be that noticeable. Early on, it looks like the HMS knowledge of the new rules package has them slightly ahead, with Team Penske and Joe Gibbs Racing nipping at their heels. But it’s still early.

Did You Notice? … On the other end of the spectrum, Roush Fenway Racing appears to have hit a new low. Running on an intermediate track Sunday, Trevor Bayne ran a respectable 19th but was out of the top 20 most of the race. In fact, RFR’s three-car tandem of Bayne, Greg Biffle and Ricky Stenhouse, Jr. was so far off, they spent time running behind underfundeds like Front Row Motorsports’ Cole Whitt. How are the chassis for these guys so far off while their engines are spurring teams like Penske to new heights?

Once the cornerstone for Ford, RFR now feels like it’s an in-house engine program with the actual cars competing there as an afterthought. Carl Edwards, while not off to a rip-roaring start with new employer Joe Gibbs Racing also sits higher in points (13th) than either of these three drivers. Las Vegas will truly tell the tale, but it seems like offseason engineering changes have done little to close the gap internally between RFR and other Ford programs.

Did You Notice? … Quick hits before taking off

Did You Notice? … I’ve been gone for a week? Thanks to my dedicated staff of editors and writers who held down the fort while I had to take some unexpected personal time. They’re the best out there!

Tom, it appears that you are one of the few people who are fooled into believing that Stewart’s teams are actually another four-team operation. The reality is that “Stewart-Haas” is another four-car Hendrick team. All too often, Tony, the bimbo, and Kevin have often called Jeff, Jimmie, Junior, and Kasey teammates. This is Hendrick blatantly thumbing his nose at the NASCAR four-car rule, and spitting in the faces of fans who know better. Three cars in the top-7? Try again! Hendrick has four cars in the top seven.

If another organization had that, NASCAR would quickly step in and go after that organization. Look what happened to Jack Roush when he got five cars into the chase in 2005. Half the field were Roush cars, and the four-car rule was created. Too, with Roush, when he began to work with the then Robert Yates Racing, NASCAR was following them around to make sure they weren’t so co-operative. But then again, as far as that Felon Hendrick is concerned, NASCAR won’t do anything to him. He is, after all, Brian’s best friend. That’s why I was surprized when JimmieChad were hit with a pit road penalty at Daytona, and four Hendrick cars didn’t get through tech on Friday at Atlanta.

If a lowly 50+year fan can see this, why can’t the media? Oh wait, I know why. Because NASCAR tells them to turn a blind eye. By the way, do you think Hendrick would autograph my copy of “Arrogance And Accords”?

Bill B
Reply to  Ken

Ken,
I think your bias is showing with regards to HMS.
Currently there are only 4 teams making engines, RFR, HMS, TRD and RCR. I have to believe that Chevrolet would like nothing better than to have RCR start using HMS engines so that they can put all their funding into one program.
Please explain to me how the Roush, Petty, Penske relationship and the Gibbs, Waltrip relationship differ that much from the Hendrick, Gannassi, Haas relationship. IMO, they are all pretty much using the same business model.

Ken
Reply to  Bill B

Bill, I realize you are a fan of Hendrick. And I will admit I have strong animosity toward him. His heavy involvement in the Honda scandal, and his sudden development of leukemia to avoid prison makes him look really low, especially since he made such a miraculous recovery. It just doesn’t happen, and I know that only too well. My father was diagnosed with leukemia and he died from it! Hendrick my look like an honest business man, but deep down, he is no better than people like Ken Lay and Jeffery Skilling from ENRON, Dennis “The Menace” Kozlowski from Tyco Industries, and Bernie Ebbers, Scott Sullivan, David Meyers, and Budd Yates from WorldCom. These guys pulled some of the greatest accounting frauds, made tons of money, and even when it all blew up, and companies went bankrupt, they came out of it with little more than a slap on the risk, although Mr. Lay did get taken out by a heart attack. Like these corporate criminals, Hendrick got away with bribery and fraud with nothing more than a slap on his wrist. (From what I hear, Jim Cardiges, the Honda Sales rep who Hendrick paid off is still in prison, vowing to take Hendrick down once he is released.)

As for the so-called co=operation between teams, oh yes, Penske and Roush are really working together. if that were true, Roush’s cars would be running up front with Joey and Brad. And I have never heard Aric Amirola refer to Greg Biffle as a teammate. With Stewart-Hass, that deal was brokered between Chevrolet and Hendrick to get Tony back behind the wheel of a Chevrolet when Gibbs switched over to Toyota. When Haas decided to go to a fourth car for Kurt Busch, maybe it was because he was finally sick of the charade, and that fourth car was to be all his. I hope that explains to you why I loath Hendrick so much. I researched well beyond his NASCAR ties!

You are correct. It’s the manufacturers behind it. Understandably so, it doesn’t benefit GM to have multiple engine suppliers.

If a lowly 50+ year fan thinks he sees something that everyone doesn’t, then I guess you’re just plain wrong.

I think you are right. What the fans think is irrelevant to NASCAR, all that matters is money.

I don’t think that the problems at SHR are with the cars or setups. I think that, with the exception of Harvick, the SHR drivers aren’t at the same level as their Hedrick teammates.

Tony isn’t what he once was and may never be again. Princess Sparkle Pony never was and it doesn’t look like she’ll ever be. Smith is a sub that’s just happy to be there but might perform better than Smoke and the Princess.

It does make one wonder if expanding to a 4th team is some of the problem at SHR. We have seen other teams performance fall off when a new team is started.

Ken, I’m no fan of Danica Patrick; matter of fact, I’m not much of a fan of any driver in particular. Having spent more than thirty years racing myself, I simply enjoy good close racing and appreciate watching the skills being shown on the racetrack. For you to call Danica Patrick a “bimbo” tells me that you aren’t a particularly bright guy. There are other words I could use but they would probably dump my comments. A bimbo is defined as “an attractive but stupid, young woman”. Danica is not the stupid one here. I’ll bet if she took you for a ride around Atlanta or Daytona or any track on the circuit, you would wet yourself and be crying like a baby in no time at all.

Ken
Reply to  Don in Connecticut

Well Don, you certainly know how to insult someone. But, I have had a lot worse said to me, by way better people that some arrogant academic. I have a very low opinion of this driver because she is as phoney as they come. When she was in Indy car, she said she would never go race in NASCAR because the races and the season are too long. But wait, all of a sudden, she jumps into NASCAR, and is given quality rides, first with Junior Motorsports. or is it Hendrick? Then she is moved into the cup series and given a ride with Hendrick’s second team. How many millions was she given to decide to come to NASCAR? Talk about selling your soul for money! Then, there are her Go Daddy commercials, which can be legitimately judged as soft porn. Oh yes, really classy! I knew a woman like her, and that “B” word you called me stupid for using is the only word to describe a woman like Danica.

Thanks for the insult, and while you are at it, get off your high horse!

Don in Ct
Reply to  Ken

Well Ken, I guess you have a reading comprehension problem too. Maybe you should take another look at what I originally wrote. You went on and on and on about how unfair life is when it gave Danica all those breaks. Bulletin Ken: life ain’t fair. As I said originally, I’m no fan of hers what I don’t like and still think is a cheap shot is calling the woman a name that has no relation to what she does. I’m not really on a high horse, Ken. It just looks that way to you because you are so down in the gutter. KMA. Have a nice day?:)

I’m not surprised that NASCAR couldn’t find 32 trucks to run in the Cup World Toyota Series. I’m surprised that they can find 32 people (excluding moms and girlfriends) willing to buy tickets. The series is dead.