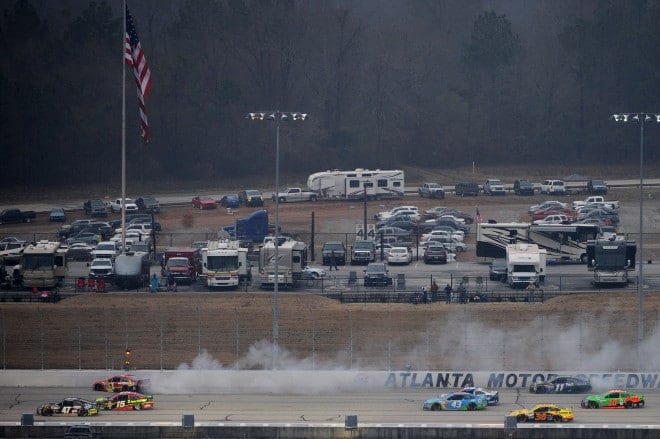 Well, the new early stop at Atlanta Motor Speedway is now behind us, and that’s a really good thing for most everybody in the sport, including this week’s winner, Jimmie Johnson and the No. 48 bunch who have four wins at Las Vegas. This weekend, things will finally begin to heat up – and that’s both on the track and in the thermometer during NASCAR’s west coast swing. The average weather for Las Vegas this time of year is mostly sunny and in the mid to high 60s and low 70s. In fact the weather forecast for the Kobalt Tools 400 Sprint Cup race on Sunday  is 75 degrees and sunny, a far cry from what teams experienced at the first two stops this season in Daytona Beach and last week in chilly Atlanta. How will that change setups? Well, that grip we saw at both tracks so far this season will be greatly reduced, and the new aero package and rules changes will truly come into play at a much more significant level on the hot asphalt in the desert of Vegas.

This weekend will be the first time in 11 seasons that Vegas’ own Busch brothers won’t be entering the race. The younger Busch brother does have one victory at Las Vegas Motor Speedway back in 2009 when he went wire to wire from the pole to victory lane in the No. 18 Toyota for Joe Gibbs Racing. He also has posted four top 5s, and an average finish of 14th at the track he loves so much. It certainly won’t be the same at Vegas this week without Rowdy Busch suiting up. One huge positive going into this weekend at Vegas is that Brian Vickers will make his return to the seat of the No. 55 Toyota Camry for Michael Waltrip Racing. Vickers sat out the first couple of weeks of the year as he recovered from off-season heart surgery. Rookie Brett Moffitt drove the No. 55 machine for MWR last weekend at Atlanta and earned an eighth-place finish on Sunday.

And now, let’s dive into this week’s mailbox questions…

Q:  If David Ragan would win a race while driving the No. 18 while Kyle Busch is out and then returned to Front Row Motorsports, would he retain the win and be eligible for the Chase (assuming he finished above the points cutoff) racing for Front Row Motorsports? – Bill B., Glen Burnie, MD

A: Thanks for writing in Bill. This question is one that has come up a lot this week as the story of David Ragan joining the Joe Gibbs Racing No. 18 progressed. The answer is yes, if Front Row can keep the No. 34 above 30th in points during Ragan’s stint with JGR. That was really a critical point for the Front Row team to make this partnership work for both them and David Ragan. Don’t forget, NASCAR drivers are independent contractors, and while they still do have obligations to sponsors and their team, they can move around if their contracts allow. Front Row’s deal with JGR here is great for everyone involved. It gives Ragan a chance to race in, arguably, some of the best equipment he’s ever been in since his days back when he began his career at Roush, and a shot to really prove himself to the rest of the Cup garage that he is truly a talented driver in the Sprint Cup Series. It also gives Gibbs a very experienced, race-proven, race-winning, veteran driver to assume the seat of the No. 18 M&M’s Toyota as Kyle Busch recovers from his injuries. Lastly, and perhaps most importantly, it gives Front Row Motorsports, a team with less resources and funding, a shot at getting into this season’s Chase for the Sprint Cup if Ragan can take the No. 18 machine to victory lane in his nine-race run which began last weekend at Atlanta.

Ragan has a career best finish of seventh at Las Vegas Motor Speedway back in 2008. Since then, the 29-year-old has been with Front Row Motorsports, and his best performance at Vegas has been a finish of 21st. It will be an interesting ride for Ragan no matter what happens this weekend. And if he can secure a win with Kyle’s ride, it would be huge for owner Bob Jenkins and his Front Row Motorsports organization.

Q:  How did this new trackbar adjuster come into play at all this weekend in Atlanta? It seemed like they never really touched on it too much on TV? – Stevie, Rocky Mount, NC

A: A lot of the changes with chassis adjustments during the race are tough to simply see on a short run, but in the long run, getting the car tighter or looser depending on the driver’s preference can be huge. This weekend at Atlanta, the new in-car driver track bar adjuster was met with widely different opinions from drivers in the Sprint Cup garage area. Some thought it was just ok and were happy to experiment with it during their testing, practice and even during the race. Others didn’t like the idea of the new addition to the driver cockpit at all, like Carl Edwards who said, “to be honest with you, I think that’s going to be an opportunity for us drivers to screw ourselves up more than it is to help us. I ended up playing with it for a few laps and then put it right back where it was, because it wasn’t doing exactly what I wanted it to do.” And for some, it did just that.

The thing with chassis adjustments is that they’re not always easy to spot right off the bat on a change, and although FOX might have not really talked much about the new in-car adjusters, the drivers were using them, and changing how their cars handled directly during the race. This new rule is going to be one of those to watch throughout the season.

Q:  I noticed that Joey Logano and a few other drivers were spinning their wheels out of the pit stall a lot on Sunday. Why was that? Was it related somehow to the cold track temps on the rubber? – John, Felton, DE

A: Hey John. Yeah, I noticed that too this weekend. Those guys were having a rough time not spinning their tires coming out of the pit box. In fact, it even cost Erik Jones several positions on pit road during the Truck Series race Saturday evening. And yes, it was partially due to the cold weather, but not what you’re thinking.

Pit crews have been known to use cola and/or sugar on the concrete in their pit stalls to help the rubber of the tires get some grip- both in and out of the stall. This past weekend because it was too cold, they were using that stuff, but it wasn’t really having the same effect as usual when it warms up and creates a sticky surface for the car. Now, the next time you see one of the crew members out on pit road during the race dumping out a bottle of Coke everywhere, you’ll know why!

Have a question? Email me at greg.davis@frontstretch.com, and make sure to check back next week when we’ll answer your questions on all things NASCAR. Until then, enjoy the racing this week from Las Vegas!

Nice column, well done. Interesting fun fact about the cola being dumped on the pit area, I didn’t know that. I wonder if Gordon’s team uses Pepsi? LOL

You can almost see the picture on Failblog. It’s one of the Pepsi-sponsored races for the 24 team, and a uniformed crew member is photographed pouring Dr. Pepper in the pit stall.

thanks, I’ll check that out!

Joking, Gina. Looks like my scenario may have been a bit too vivid.

I’m pretty sure that Joey’s pit stall (pit stall #1) was on asphalt instead of concrete which is why he had so much trouble spinning his tires leaving the pits.