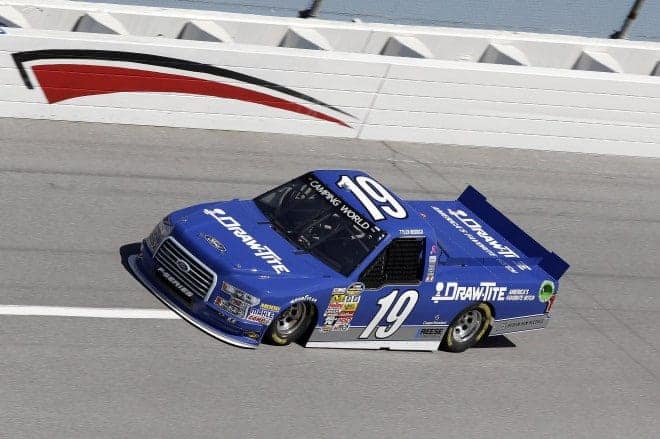 Now that the first two races of the season are under our belts, the Camping World Truck Series is in its normal one-month hiatus before hitting the track at Martinsville Speedway later this month.

Normally, Daytona isn’t a very good indicator of which drivers might stand out in a season, simply because of the uncertainty that accompanies superspeedway racing. But with an intermediate track in Atlanta already done with, there are certain drivers that are already starting to stand out as ones to watch this season.

Here are three of them.

Daytona winner Tyler Reddick stole headlines almost as quickly as John King did when the little known driver surprised the NASCAR world with his win in 2012. But the driver of the No. 19 Brad Keselowski Racing Ford wasn’t nearly as much of a surprise. As I mentioned leading into the race in Atlanta, Reddick was on fire to close out the 2014 season, and it was only a matter of time before he headed to Victory Lane.

With that said, as unpredictable as superspeedway racing can be, surviving until the last handful of laps can make pretty much any driver eligible to take the checkered flag. Reddick’s performance in Atlanta was thus just as impressive. He started 11th, and though he never led any laps, that didn’t change what was seen from the driver in his first full-time season. During the second caution, Reddick was busted for speeding on pit road and lost all track position he had. But instead of crumbling under the pressure, he simply put his head down and methodically worked his way back to a solid fifth-place finish, enough to allow him to keep the point lead by just two markers over Atlanta winner Matt Crafton.

Obviously two races is hardly enough to make a fully accurate assessment of a driver’s abilities, but I was impressed with what I saw from Reddick last season and how he’s started off this year. Assuming he continues the way he has in the last dozen races, his name is one that will be in the championship conversation come late October.

I don’t want to spend too much time on Cameron Hayley since I will be featuring this year’s rookie class in the next week or two, but this one is definitely a driver worth mentioning. While he hasn’t had the best start to this year, finishing 23rd and 14th at Daytona and Atlanta, respectively, Hayley’s three starts last season puts him on the radar in his rookie season. The Canadian made his series debut at Canadian Tire Motorsport Park last year, finished seventh and backed up that performance with finishes of sixth and 10th at New Hampshire and Texas, respectively.

The big question mark for Hayley, though, is the team he’s with. It’s not a knock at ThorSport Racing by any means, but the organization has previously struggled with its third entry. Just ask Dakoda Armstrong, Todd Bodine and even Jeb Burton. Most of the problems these drivers faced was a lack of funding, and a look at the pit setup for Armstrong’s campaign with the team showed his portion of the team seemed like more of an afterthought, rather than a third entry.

But with that said, Hayley has brought along a solid sponsor in family owned Cabinets by Hayley, and that money infusion may be just what ThorSport needs to bring the third truck to the next level. It’s worth keeping an eye on Hayley as the season wears on, especially since he also has veterans Matt Crafton and Johnny Sauter by his side.

Simply put, a driver that wins back-to-back championships needs to be in the discussion of drivers to watch. That same driver has finishes of eighth and first to start the year and currently sits just two markers out of the point lead. Consistency has been the key to Crafton’s success over the past two seasons, and so far there’s no indication that this year will be any different.

One of the things that stands out about Crafton is his veteran’s approach to the championship battle. Rather than points racing, the driver of the No. 88 Toyota simply takes each race as its own, and frankly that’s probably a big part of why he’s got two championships to his name now.

“We haven’t looked at the points and we haven’t focused anything on points,” Crafton said in a Toyota press release last season. “Just went out there and tried to win as many races as possible.”

Until another driver surpasses Crafton and forces him to win more than a couple races, instead of leaning mostly on consistency, it’s reasonable to believe he will be in the championship conversations for many years to come.

* Any driver that runs with Kyle Busch Motorsports can probably expect to run well since the organization has really stepped up its game over the last couple of seasons. And that’s no different for Erik Jones, who impressed with his part-time schedule over the last two seasons. With four wins and 13 top 10s in his 17 starts across 2013 and 2014, Jones started off the season strong once again, finishing runner-up at Daytona and seventh in Atlanta. He has the talent and ability to excel in NASCAR, and the key will be how he handles the pressures when struggles pop up. So far, his response bodes well for the future.

* Now in his sophomore season, Ben Kennedy quickly impressed at Atlanta Motor Speedway Saturday evening. Methodically taking each lap on its own, Kennedy, who in now with Red Horse Racing, was mentioned multiple times throughout Saturday’s race broadcast. Though he had just seven top-10 finishes in his rookie campaign, Kennedy has wasted little time bringing his name into the conversation this year, taking the pole in Atlanta and backing that up with a third-place run, matching his career best from last year. It remains to be seen if he will be able to finish race where he’s running, a problem he’s faced in the past, but in the meantime, it’s worth watching his performance this year.

NASCAR has done everything possible to make this series a non competitive unwatchable mess. They could take a six month hiatus and I doubt anyone would notice.

Beth’s boss: She is a fine writer. Whatever she did to you I know she is truly sorry. Let us be forgiving and allow her to write about something somebody actually watches.