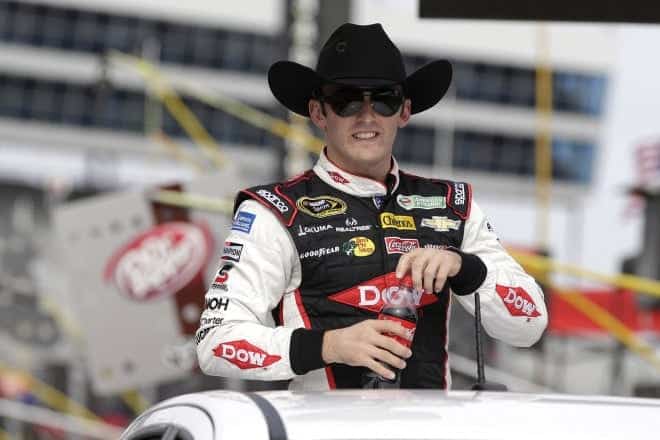 2013 NASCAR XFINITY Series champion Austin Dillon is set to run an expanded schedule after running just one event in 2014. Running his second race of the year at Las Vegas Motor Speedway, he ran the fastest lap during the first practice session at 29.838 seconds (180.977 mph).

Dillon has two top 10s at the 1.5-mile track in a pair of starts in the XFINITY Series. In the Camping World Truck Series, he scored his second career victory with a win at Las Vegas in 2010.

Dale Earnhardt, Jr. was runner-up to Dillon during Friday’s practice session in the No. 88 car. Earnhardt was over two-and-a-half tenths of a second slower than the No. 33 car. Regan Smith, Ryan Blaney and Denny Hamlin rounded out the top five.

Ty Dillon struggled early in practice for Richard Childress Racing. The No. 3 car was outside of the top 20 until late in the session, where the team made large changes to the setup, and was able to end the session in sixth.

Joe Gibbs Racing driver Daniel Suarez was under the weather on Friday afternoon. Matt Kenseth filled in for the Sunoco Rookie of the Year candidate in the No. 18 Toyota. Kenseth was ninth quickest, but Suarez was able to run a handful of laps at the conclusion of practice.

Brian Scott blew an engine before he was able to complete a lap early during the session. After experiencing issues while trying to get into fourth gear, his engine gave way in the No. 2 car. Scott will start at the rear of the field for Saturday’s race.

Austin Dillon went on to lead the final practice session, held just 30 minutes after the first. Scott came in second on the speed charts, followed by Ryan Sieg. Brendan Gaughan and Regan Smith rounded out the top 5.