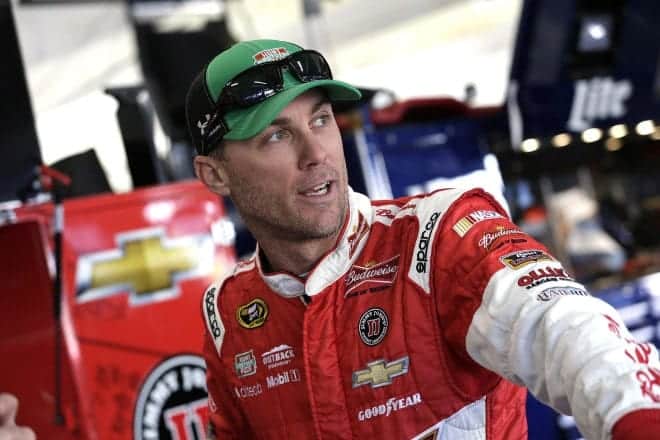 Two down, 34 to go. The NASCAR Sprint Cup Series will be heading west for round three of its long and arduous season this weekend to a beautiful venue known as the Las Vegas Motor Speedway. Built in 1996 and then subsequently reconfigured 10 years later, Vegas has become a familiar stop on the circuit and has provided the series with some great finishes along the way.
The past two races at the facility have yielded fantastic late race battles that saw the win come down to the wire. Could another memorable race be in store for this Sunday? Read on and find out.

1. Will the series go three for three with exciting races to start the season?

So far, the Sprint Cup Series has gotten off to a whirlwind of a start to the 2015 campaign,. The opening two races of the season at Daytona and Atlanta were both extremely competitive affairs that saw a great deal of passing, drama and excitement. Atlanta in particular ought to serve as a harbinger of what is to come at Vegas this weekend, as both tracks have weathered surfaces conducive to tire falloff and high speed intermediate track-style racing. In other words, they tend to produce races that appear relatively similar in terms of on-track aesthetics.

Due to how similar the two tracks are, I expect a race on Sunday very similar to the one we saw last week at Atlanta, perhaps with more passing. The 2015 intermediate track rules package is being improved upon by the day, and as such, it is reasonable to assume that Sunday’s race will be even more competitive than last week’s affair since the teams now have a full-race under their belts with the new package.

We very well could see another late-race duel to the checkers this week in the vein of Brad Keselowski/Dale Earnhardt, Jr. in 2014 and Kasey Kahne/Matt Kenseth in 2013. The rules package is solid and improving, the track is racy and the weather will be hot and sunny. Sounds like a recipe to a competitive day on track, if you ask me.

By all accounts, Kevin Harvick had the car to beat in this race last year. Harvick battled through adversity all day, fought his way to the lead late in the going and then mechanical gremlins reared their ugly head. It was the first of what would end up being many days in 2014 ruined by mechanical problems for the No. 4 team, and most certainly stands out as a reminder of the team’s biggest weakness as a championship outfit.

Of course, sense that day, Harvick has enjoyed the greatest stretch of his NASCAR career, winning multiple races, leading countless laps and grabbing a championship along the way. But for Harvick, a driver who has never won at the Las Vegas Motor Speedway, days like the one he had here last year never leave the memory bank. My guess is that Harvick is not only still angry about what happened here last year, but he is also entering this weekend with a mindset of taking back what he believed was stolen from him one year ago.

Given that Harvick is one of the hottest drivers on the circuit already thus far in 2015 (he has two top-2 finishes in the first two races), him having extra motivation is bad news for the rest of the field. Look for Harvick to be strong all day and to be the driver most likely to wind up in Victory Lane when the dust settles after 267 laps of racing.

3. Can Brian Vickers return to form in his first race back from heart surgery?

Lost amid the continuing news of the Busch brothers absence from the Cup Series in 2015 has been the story of one Mr. Brian Vickers. Vickers, the driver of the No. 55 Michael Waltrip Racing Toyota, missed the first two races of the season due to his recovery from open heart surgery that he underwent in early December. In any other season, this story would be much bigger, but with all of the off-track craziness that has taken place thus far over the past month, the story has been lost in the shuffle.

Nonetheless, Vickers will be back for good this week and piloting a car that is capable of making the Chase. Missing two races is about the maximum that a driver can miss by my estimation to still be a threat for Chase contention, so Vickers is already starting off the season at a disadvantage. As such, the big story for Vickers this week will be whether or not he can return to form quickly enough to jump back into the points race.

If history is any indication, the answer is yes. Despite only running an incredibly brief part-time schedule in 2012, Vickers posted five top 10s in a chopped up and abbreviated eight-race run, so clearly he has the ability to return to top form in times when he has to return from an absence from racing.

Either way, it’ll be fun to watch Vickers as he attempts to do the unthinkable in 2015, make the Chase despite missing multiple races. He has the car, team and barely manageable-enough points deficit to do it. Will the driver step up as well? That’s what we’ll know after Sunday’s race.

4. Is this Regan Smith’s last chance to shine?

As Brian Vickers returns to his seat in the Cup Series, another driver’s days in NASCAR’s premier division look to potentially be dwindling. Regan Smith, the driver who has been subbing for Kurt Busch during his domestic violence suspension, may not be in the No. 41 car for very much longer. The Delaware Department of Justice stated yesterday that it will not pursue charges against Kurt Busch in the Patricia Driscoll domestic violence case, citing insufficient evidence as the reason to drop the pursuit. With Busch now potentially exonerated, it is reasonable to think that he may have his suspension from the sport revoked.

Should Busch’s suspension be revoked, Smith will almost certainly be booted from the ride in favor of Busch. So what does that mean for Smith? He has one race left at the very least, this Sunday’s event at Las Vegas, to prove his worth as a driver in the Sprint Cup Series. Smith, a full-time XFINITY Series driver, has made it clear that he wants to return to Cup racing full-time. He needs to make something happen during his stint here in the No. 41 car if he wants to make that a reality.

The writing is on the wall either way for Smith, so my guess is that he’ll be driving with an extra sense of urgency in Sunday’s race. Another middling result like the ones he posted in Daytona and Atlanta will simply not cut it if he wants another shot at the Sprint Cup Series in the future.

Atlanta was exciting? Not the race I watched on tv.

Agreed. It was at best ‘alright’. There was passing, but only by a small handful of drivers.

Gee, aero dependent kit cars with gelded engines, how can that not produce exciting racing!