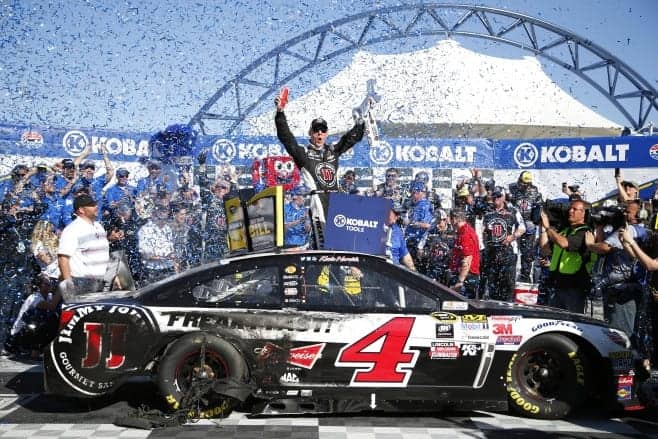 To say that Kevin Harvick is on a “hot streak” doesn’t quite seem to capture the impressive performance he and his team have put on lately, but that’s exactly what it is. Harvick’s win at Las Vegas Motor Speedway was his sixth consecutive finish of either first or second, dating back to last season. Considering that Harvick is the defending Sprint Cup Series champion, this may not be too big of a surprise.

With that said, it’s not particularly uncommon to see drivers who were strong one year struggle mightily the next. Consider Matt Kenseth, who won seven races in 2013 and finished second in the championship, only to follow that up in 2014 with zero wins and a seventh place finish in the final standings.

Jimmie Johnson is another example. Despite winning his sixth championship in 2013, Johnson would only finish 11th in the standings the following year. Yes, there was a new points system in place, but even Johnson would admit their performance was certainly not to the same level that it had been the year prior.

So to wonder if Harvick was going to carry over the momentum from an incredibly strong 2014 season wasn’t completely unwarranted. It’s difficult enough to put a strong season together in the first place, let alone be able to pick up right where you left off the following season. Oh, and did I mention 2014 was the team’s first season together?  They’d have to face a slump sometime, right?

According to Harvick, the team as a whole shared those same concerns.

“I have been absolutely terrified that we would never sit up here again, and I think that’s the motivation that [crew chief Rodney Childers] and I have talked about, and just making sure that you don’t let everybody down,” Harvick said during the post-race press conference. “You have to figure out ways to motivate yourself and motivate our team, and for us, it’s just that motivation of trying to be the best you can in every practice and be the best that you can in qualifying.”

In other words, Harvick and the team as a whole find motivation by recognizing that you are only as good as your last race.

“Friday, you would have thought that the end of the world had come because you looked at everybody on the team and it was like, oh, my gosh, we qualified 18th,” Harvick continued. “I just went back to my motor home and laughed and realized that we were really disappointed about qualifying 18th and knew that these guys were going to go home and concentrate on what they needed to do.  And they came back the next day, and they’re like here’s what happened, here’s what we’re going to do, here’s what we did with the balance of the car.”

And apparently it worked. Harvick dominated the race, leading 142 of 267 laps. Even as the laps wound down and Harvick reported a vibration, second-place Martin Truex Jr. was still over a second behind Harvick when the checkered flag flew (the margin of victory at the line was 1.64 seconds).

As it stands now, Harvick is the series points leader with a nine point gap between himself and second-place Dale Earnhardt Jr. and the win all but guaranteed Harvick a spot in the Chase. With only three of 36 races in the books, however, it’s still way too early to say who will and won’t be contending for the championship come Homestead. However, he certainly is making a case as the (very!) early-season favorite.

The team, however, is not approaching it that way.

“I think that they (the team) actually have forgot that we won the championship last year, and that’s the best thing that could have happened because it’s a week-to-week goal of acting like you’ve never won a race in your life,” Harvick said, describing the team’s mindset. “Today might be the last one, and that’s how we have to approach it.  We’re going to celebrate it like it’s the last one.  We’re going to approach next week like we’ve never won a race because that’s what keeps it fun and that’s what keeps us motivated, and you have to continuously find motivation, and these guys have all bought into each other.”

A motivated No. 4 team? That sounds like trouble for the rest of the field, even for the previous two winners this season—Johnson and Joey Logano—who were the only other legitimate threats  for the victory against Harvick on Sunday. Even they ran into their own troubles during the race and, despite some moments of speed from the likes of Earnhardt and Truex, Harvick was virtually untouchable.

As he has been the last several weeks, and that trend doesn’t appear to be stopping anytime soon. Despite the team’s “clean slate” approach each weekend, the No. 4 bunch has every right to be confident heading into next weekend and the competition should certainly be concerned. Why?

The next race is at Phoenix International Raceway, where Harvick has six previous victories … including sweeping both races at the track in 2014.

Still not convinced? Harvick hasn’t finished worse than second in five of the last six races at Phoenix.

Perhaps it isn’t so early to consider Harvick a favorite after all.