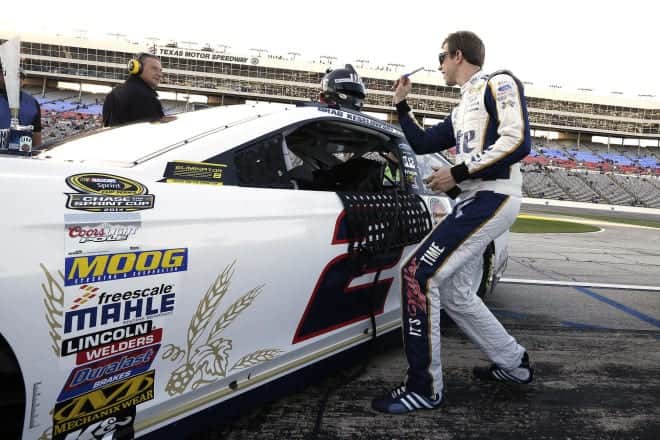 200 and Counting for Brad Keselowski
Brad Keselowski finished his 200th Cup race with a seventh-place finish and nine laps led on Sunday in Las Vegas. The eight-year veteran has picked up 16 victories in his double century of appearances, along with 50 top-5s, 81 top-10s, 3,110 laps led and that all-important maiden championship in 2012. Although he never really looked like a threat to take the checkered flag at Las Vegas Motor Speedway, Keselowski still found a way to lead laps late in the going and had a caution fallen more fortuitously may have even finished higher than seventh. Keselowski and crew chief Paul Wolfe are a fascinating tandem, often marching to the beat of their own drum rather than the pack-suggested direction. And Keselowski is a driver I always suggest folks that are new to NASCAR consider when they ask who they should pick as a favorite: the wheelman of the Blue Deuce is very much a throwback to a different era with his hardscrabble, non-traditional take on the sport – especially when viewed via the prism of his voracious twitter feed. So it’s 200 up for Keselowski. How his next 200 races unfold is anyone’s guess, but if I could say one thing about them – my feeling is that they’ll be anything but boring.

Great Start for AJ
Last week, I wrote about unexpectedly good starts to the nascent 2015 season for both Casey Mears and Martin Truex, Jr. This week, it’s AJ Allmendinger‘s turn, after the driver followed up a seventh-place effort at Atlanta Motor Speedway with a one spot better sixth-place result at Las Vegas. Combined with a 20th-place run in the Daytona 500, it’s good enough for fifth place in the overall standings. “Honestly, that’s one of the best races we’ve ever had…” Allmendinger said in a team release on his finish in Sin City. He also battled a pre-race case of the flu.

What’s clear to see is that the RCR alliance is paying dividends for the one-car JTG-Daugherty outfit that struggled mightily on the mile-and-a-half circuits in 2014. Allmendinger made the Chase last season, courtesy of his win at Watkins Glen, and while he’ll always be a threat on the two road courses, this season’s marked improvement on the bread-and-butter tracks is a hugely promising sign. “I love what the guys are doing back at the shop,” said Allmendinger post-race. “The race cars that we’re putting out are so nice…I think we’re all getting better, and that’s what we all need.” So far, so good then for Allmendinger: can he continue this fine form as the season progresses? Should be interesting to watch.

NASCAR Fantasy
For the last eight or nine years, I’ve been an absolute NASCAR fantasy junkie. There, I’ve said it. It’s always best to be open and honest with your flaws, right? Truth is, I’ve spent far too long thinking about, agonizing over, and debating my weekly lineups for what amounts to little more than bragging rights. For the most part, I’ve been fair-to-middling with my predictions and in the interests of full disclosure, my wife has completely eviscerated me in the overall standings these past couple years. She actually finished in the top 2,000 in the country in the 2013 season, so far above me I got a nosebleed looking up. But then again, she reads the excellent and comprehensive previews (Yahoo Fantasy is our league of choice) while I tend to pick based on my opinions and preferences without additional aid. This year, I’m off to an OK – if not brilliant – start so hopefully there’s some improvement in the near future. One thing is for sure, though, I enjoy the races even more as I watch with a view to my picks each week. So, if you’re not in a league, you should join up. It’s too late for you to win an overall title but my guess is you’ll not regret the weekly fun. Good times, folks, good times.

NOTE: Frontstretch has its own fantasy league over at NASCAR.com. Check it out and Nathan Kilmer’s column every Saturday to get the expert picks for the race!

Off to the Desert
Don’t be surprised to see Kevin Harvick go back-to-back this weekend as we head to Phoenix International Raceway for race number four on the 2015 schedule. “The Closer” won both races at PIR last season, pacing the field for 224 of 312 laps in the spring event and 264 of 312 laps in the playoff race – a whopping 488 of 624 total laps (or 79.7%, if you prefer). That’s some pretty hefty dominance for the reigning champ and there’s every reason to think, especially coming off the back of an impressive win at Las Vegas Motor Speedway, that we’ll see more of the same this weekend. Harvick is on an incredible run of form with three wins in the last five races (including the final two events of 2014) and six straight finishes of second or better. That streak has to come to an end at some point; such is the nature of competition at the sport’s top echelon. But for now, Harvick is laying down the sort of form that makes him a preemptive championship favorite. I’ve talked before in this column about just how hard it is to repeat championships but for now, with Harvick everything is going right so far. I don’t expect that to change this weekend at Phoenix.

Points May Mean Prizes
In the past few weeks, and this week with AJ Allmendinger, I’ve highlighted several drivers who have made fast starts to the season. But with 23 races to go before the playoffs begin, it’s worth noting that a fast start can be just that – a fast start, forgotten with two or three weeks of subpar finishes. The NASCAR season is long and relentless and while the “win and you’re in” approach to the regular season keeps drivers in playoff contention right down to that final race at Richmond, it’s worth noting that consistency also counts. Last season three drivers made the playoffs without a trip to Victory Lane: Matt Kenseth, Greg Biffle and Ryan Newman, the latter almost parlaying his way to a Cup championship as he contended right down to the final lap of the final race. So what’s my point, you might ask? Well, it’s just that consistency does count. You hear a lot of “win or it doesn’t matter” sound bites from drivers, especially those already with victories on the year, but the fact is that reliability can be rewarding. It’s likely we won’t see 16 winners in 26 races — Harvick and Jimmie Johnson, in particular, look likely to pick up multiple victories – so playoff places will almost certainly be up for grabs for strong points finishes. Wins are vital, yes, but they’re not everything. Just ask Newman.

Congrats to AJ and Casey Mears…keep it up!

Agreed. Great to see the single car operations making headway. Would love to see AJ, Truex, and Mears in the Chase.