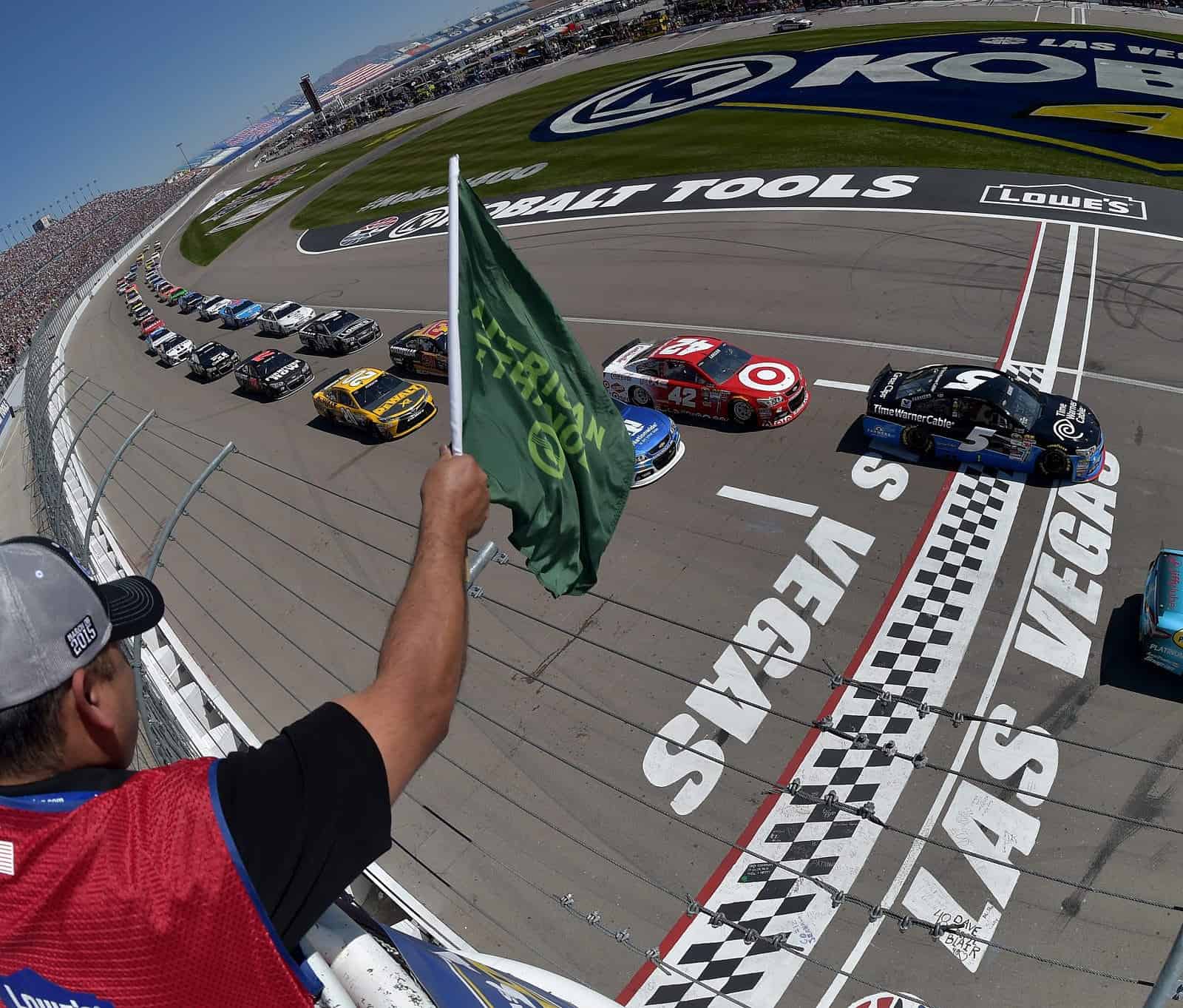 Cup: Harvick Closing The Deal – So far this season, Hendrick engines and chassis have been out front with NASCAR’s new rules changes. Jeff Gordon won the most laps at Daytona, Jimmie Johnson won Atlanta and for a time it was Johnson, Dale Earnhardt, Jr. and Kasey Kahne running 1-2-3 in Las Vegas. For whatever reason, Stewart-Haas Racing has not experienced the same success despite being prepped with similar information: Danica Patrick, Regan Smith, and Tony Stewart wound up well outside the top 10 Sunday.

But in the midst of those struggles, there’s one important SHR exception: defending Cup champion Kevin Harvick. Harvick, the deserving winner of the sport’s new Chase format has come out with a blazing 2-2-1 start, culminating in Sunday’s Las Vegas victory. The point leader once again, he’s already secured a Chase bid and has Phoenix, a track where he swept the races last year up next. How has Harvick not lost a step when HMS across the way has gained it — all while the rest of Harvick’s organization is falling down?

The answer is simple: start each week like you still have something to prove.

“I think that [the guys] actually have forgot that we won the championship last year,” Harvick said, “And that’s the best thing that could have happened because it’s a week-to-week goal of acting like you’ve never won a race in your life.  Today might be the last one, and that’s how we have to approach it.”

It’s doubtful Sunday was the last 2015 win for Kevin, though. The way this team is running, insulated from the Stewart-Haas Racing drama around it my guess is it’s the first of many. Hendrick’s four teams may be formidable, but they can’t “get rid” of their ally who’s become adept at closing the deal. – Tom Bowles

XFINITY: The Hat is Back with Childress – It’s been a while since Richard Childress Racing has been a dominating force in the NASCAR XFINITY Series. However, Austin Dillon proved that the organization is back to being a contender. During Saturday’s race at Las Vegas, Dillon led 183 of the 200 laps. Going uncontested until the closing laps, the No. 33 car showed that Childress’ team is back, which could be big for Brendan Gaughan, Brian Scott and Ty Dillon, who are each aiming to win a championship this year.

After all the hype following the first two races, Roush Fenway Racing picked up where they left off last year at the intermediate tracks: struggling. Darrell Wallace, Jr. has an impressive run in seventh, but there weren’t too many bright sides besides him. Veteran Elliott Sadler led a line of three straight Roush drivers spanning 13th to 15th at Las Vegas. The abysmal performance by each of its drivers took away the team’s momentum, and heading to Phoenix should help them since it’s a shorter track.
Rookies Brennan Poole and Daniel Suarez had impressive runs at Las Vegas. Poole was two laps down, but stayed out a few extra laps and was able to get back on the lead lap when a caution came out. He finished ninth in his series debut, while Suarez earned his first career top 10 in his fifth start. These two drivers are just a small example of the fantastic talent the XFINITY Series has this year, and they should continue to grow into contenders as the year goes on.  Joseph Wolkin

NHRA: Generation Next – Another generation will step up to carry on the legendary Coughlin name in the NHRA professional ranks when T.J. Coughlin makes his debut in the J&A Service Pro Mod Series at the Amalie Motor Oil NHRA Gatornationals next weekend. Coughlin will compete alongside his father, 2012 Pro Mod champion Troy Coughlin, in a JEGS.com Corvette as part of a two-car team effort.

“To see your name on the door of a professional-class car is very majestic for me. I was once a kid in the stands watching those cars, and to get in a car with my name on the door — there really are no words for it,” said Coughlin.

Coughlin had success in the Sportsman ranks on his way up the ladder, winning the NHRA Division 3 Super Gas championship along with winning numerous races in Super Gas and Super Comp.

“I race for a great family: My parents, my cousins, uncles, aunts, grandparents. It’s a big honor, and I’m excited to take on the challenge. Racing with Dad is the whole reason why I ever started racing,” Coughlin said. “I always wanted to race so I could be with my dad. Being in the same class is going to be a lot of fun, and a lot of good memories are going to be created, that’s for sure.”

In other news, voting continues for the K&N Horsepower Challenge, a special bonus event for the Pro Stock drivers. Veteran Larry Morgan is among those who are hoping to win the fan vote to earn the eighth and final spot in the field and a special website, setlarryonfire.com, has been set up to help his efforts. The name of the campaign is a play on Morgan’s new sponsor, FireAde.

Fans can learn about Morgan, the race, or FireAde and can vote him in via the website. Special #VoteLarry decals will also be available for fans at upcoming races in Gainesville, Fla., and Charlotte, N.C. Morgan won the Challenge in 1989, 1990, and 1992. Toni Montgomery

Formula 1: Money the Big Question – As the Formula 1 season is set to begin, the overarching concern regarding the sport involves finances.  For the stalwarts, like Mercedes, Red Bull, McLaren, and Ferrari, this aspect isn’t quite their focus – they seem to be doing just fine.  But for other teams and even tracks this issue is one that is not likely to go away.

Case in point: Geido van de Garde is in the process of taking Sauber to court over the fact that he was not given an open seat in the offseason.  The former reserve driver, van de Garde, claims that he was promised a ride for this year, however Felipe Nasr took the spot.  While Nasr, too, brings with him certain financial promises, that being the possibility of being able to lure Brazilian companies to the team, van de Garde already brought backing.  Regardless of how the courts rule, the ordeal is one that shows the problematic aspects of funding a team.

To follow, Marcus Ericsson, who raced for the now defunct Caterham team, is now on Sauber.  One of the articles leading up the this season was titled, “I’m More Than Just a Pay Driver,” which argues that Ericsson is more than just his financial backing.  There is some truth to the notion as he did win two titles in junior divisions but as yet, he’s shown little to get giddy about in F1.  This situation just adds another level of intrigue to the drama that is the worldwide spectacle of Formula 1.  Huston Ladner

Sports Cars: Estre Opens Up a Can on the Field in the Rain – This past weekend was the season opener for Pirelli World Challenge at Circuit of the Americas in Texas. 116 teams were entered in the seven classes in action. The weather ran the complete gamut throughout the weekend from cold weather for Thursday’s test, to perfect on Saturday and rain on Sunday.

Saturday’s first race for the combined GT, GT-A and GT Cup classes came down to a duel between Ryan Dalziel (splitting his time in 2015 between Pirelli World Challenge, TUSC’s North American Endurance Cup and the World Endurance Championship) for Effort Racing and Olivier Beretta for R. Ferri Motorsports. In the closing laps, Beretta ran down Dalziel and made a move for the lead in the final turn coming to the white flag. Dalziel attempted a crossover move and retook the lead briefly before Beretta’s Ferrari 458 Italia powered back by at turn 1 to take the lead for good and the win. Dalziel held on for second, followed by Johnny O’Connell in the debut race for the brand new GT3-spec Cadillac ATS-VR.

Sunday brought sizable rains to COTA which messed around with the schedule. The second GT/GT-A/GT Cup started roughly a half-hour earlier than planned to avoid extreme rains that could have made the track unraceable. However, race No. 2 belonged to Kevin Estre from the moment the green flag feel. Estre moved to the outside from the second row and was able to get past O’Connell and pole sitter Nick Catsburg at the first turn to take the lead.

From there, Estre made use of contrarian lines around the 3.4 mile road course in order to avoid the more oil-slicked and smoothed out pavement that is indicative of the normal racing line. The result of that strategy was that Estre was turning in laps upwards of three seconds faster than his competition at times. Even with a full course caution partway through the race, Estre still managed to win the 50 minute race (which covered only 18 laps) by a convincing 30.344 seconds over Dalziel’s Porsche 911 GT3R. Note that Estre was in his first race weekend with the team (a joint venture between K-Pax Racing and Flying Lizard Motorsports) and the car he was driving (a new McLaren 650S GT3) had never raced prior to Saturday. Catsburg was third, another four seconds back with Mike Skeen (best known to NASCAR fans for his dust-up with Max Papis at Canadian Tire Motorsports Park in 2013). Fifth was Ryan Eversley, driving the only World Challenge-spec Acura TLX with all-wheel drive in the field. Eversley took advantage of the all-wheel drive to move up from the 25th starting spot.

In GT-A, former ALMS and Trans-Am regular Michael Lewis claimed both victories for Effort Racing in their No. 41 Porsche 911 GT3R. His runs were good enough for fifth overall on Saturday and ninth on Sunday. If Lewis keeps this form up, he likely will be promoted to the regular GT class fairly quickly, perhaps as soon as Long Beach in April. GTS saw Kris Wilson win the dry race on Saturday in an Aston Martin Vantage GT4, while Michael Cooper won the wet race Sunday in a Ford Mustang Boss 302R.

Short Tracks: The Pro All Stars Series began their 2015 season down south at Dillon Motor Speedway in South Carolina. Defending champion Tyler Church claimed the victory in the 125 green flag lap Super Late Model race, cementing his capability to race into the future. Church mentioned after the win that the family borrowed money on their house in order to compete on Saturday.