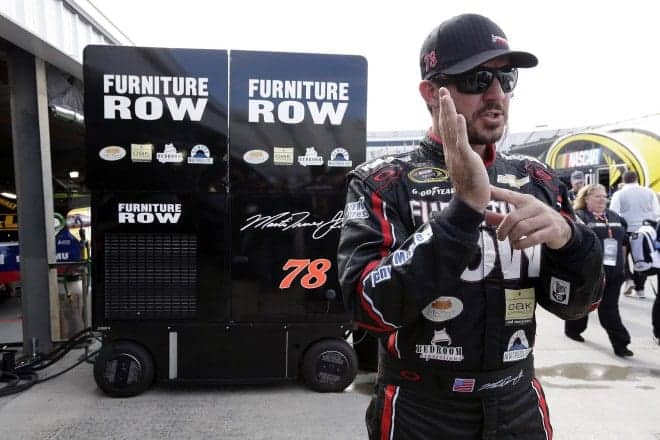 Three races, three top-10 finishes. It’s a hard streak to accomplish when you start off a Sprint Cup season, in particular when new rules and the restrictor-plate madness of Daytona are included. Yet here we are, three races into 2014 and four drivers can lay claim to the feat. Three of those are ones you’d expect: Dale Earnhardt, Jr., Kevin Harvick, and Joey Logano. All of them come from multi-car powerhouses; all of them were expected to enter the season as title contenders. It’s a list that has you thinking the same old faces will rise to the top this year.

Until, that is, you get to Martin Truex, Jr.

Driving for single-car Furniture Row Racing, Truex’s goal entering 2015 wasn’t “championship,” but simply “contract extension.” The last-minute pairing, made after nightmares unfolded during “Spingate” at Michael Waltrip Racing in late 2013 did nothing to stop a career that suddenly spun backwards. Just one year removed from near-Chasedom, Truex had a year at FRR that included the same number of top-5 finishes (one) as total laps led. That’s right; the list of people who spent more time at the front last season included Travis Kvapil, Michael Waltrip, Michael Annett and Reed Sorenson. A No. 78 car that made the Chase with its previous driver, Kurt Busch, finished dead last in the Daytona 500 and never recovered, winding up 24th in points and a whopping 223 markers behind the top non-Chaser, Kyle Larson.

For Truex, the season-long slump was hard enough; the revelation that girlfriend Sherry Pollex had ovarian cancer was like 50 sucker punches in the gut. While choosing to finish out the year in the car, hitting the racetrack while Pollex went for chemo, his focus and future was mentally thousands of miles away — in that hospital room. Add in brother Ryan’s concussion, suffered during a wreck with BK Racing, and the Truex family suffered through the equivalent of a racing nightmare.

“We had fundamental issues last year,” Truex said Sunday, “That we needed to correct in the wintertime.”

Both personally and professionally, the driver took a step back to retool. So did FRR, promoting engineer Cole Pearn to the crew chief’s role and refurbishing their cars based on a new set of rules. Richard Childress Racing took the time to better integrate their single-car customers, like Colorado-based FRR into their chassis alliance.

Maybe they did too good a job because right off the bat, Truex has run circles around the RCR trio and almost everyone else. He nearly won the exhibition Sprint Unlimited, remained competitive all the way through the Daytona 500 (with a top-10 result) and hasn’t looked back since. A second-place finish Sunday at Las Vegas was the latest step in a shocking start, one that’s left him fourth in points and driving for the top “underdog” organization on the circuit. Heck, his average finish (5.3) is nearly higher than any result he achieved during any race last season.

“Cole and our engineer Jazzy, they really came up through that RCR program,” Truex explained. “So they’re really tight with the group there and really bought into their engineering program, really buying into the way they’re building their cars, and really trying to stay on the same page and not say, well, we’re going to go down this road and do our own thing.”

The duo has also built confidence, both within the shop and inside the cockpit. And with girlfriend Sherry doing better, Truex is also breathing a sigh of relief.

“I’m obviously very proud of Sherry (Pollex, girlfriend) and what she’s been through,” he said Sunday, “and everything I’ve learned from her to be a better person.”

Their rollercoaster experience together has also made Truex a better driver. A bad pit stop by the crew? That’s put in perspective when the most important person you know is fighting for their life. Tempestuous radio traffic has been replaced by constructive criticism. The number of “thank yous” and genuine kindness you hear in public from this normally mild-mannered driver has hit a record high. People who deal with despair appreciate it that much more when they bounce back.

The way this team is clicking, it looks like they’re bouncing back to stay. It’s a pleasant surprise in a NASCAR season that could use more of these types of underdog stories.

Being that I live in Denver I’m a huge fan of FRR and MTJ. Glad to see positive results from them. Both a class operation and a class driver. Go Martin!!

No question, the feel-good story of the year so far. One only hopes that he gets another shot in a top-tier ride. Personally, I hope he ends up somehow at SHR. There could be an opening next year, especially if Stewart decides to retire or if Danica doesn’t get re-signed.