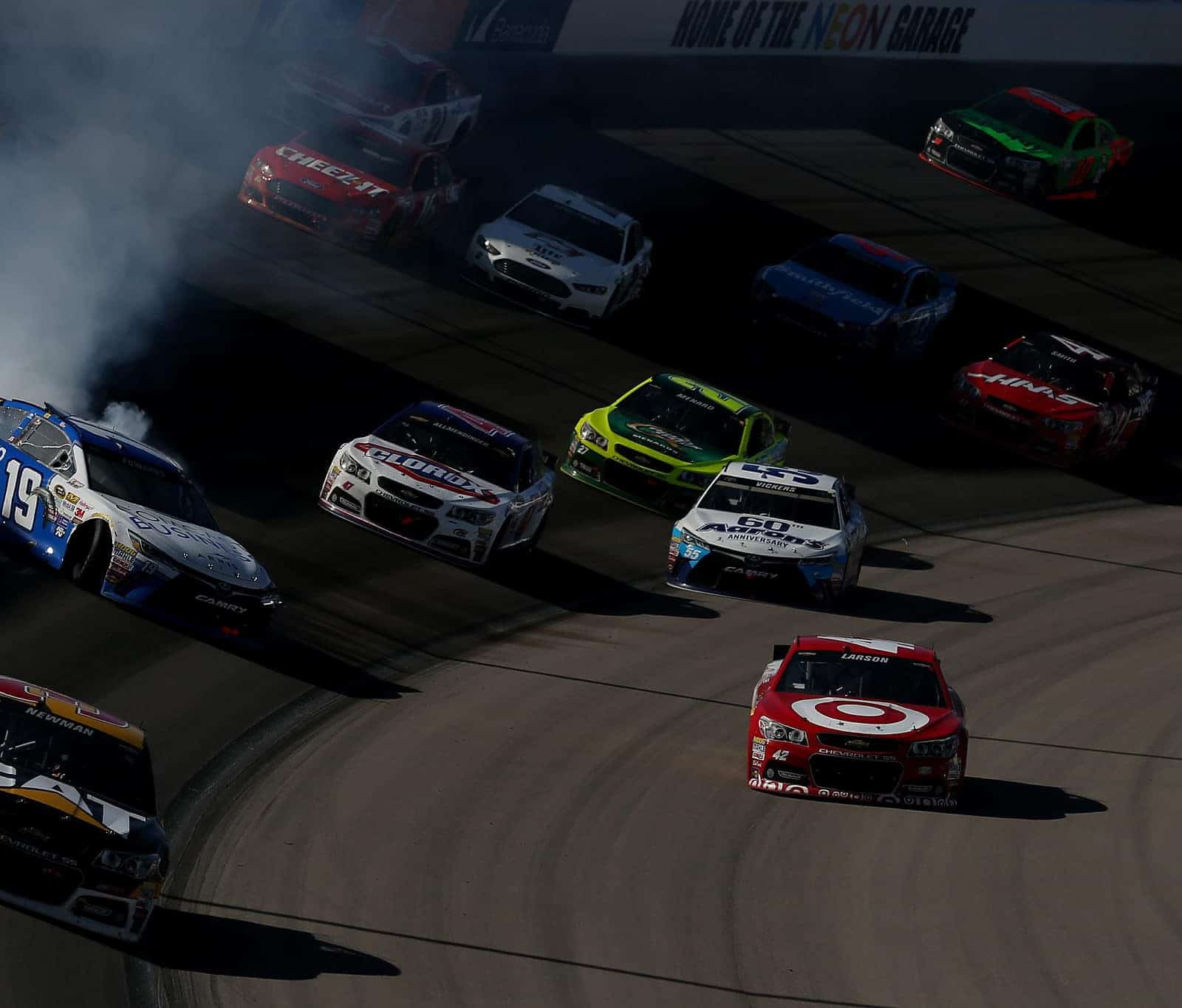 Burnouts (Hot)
So just how hot are Kevin Harvick and the No. 4 team right now? To quote an old song from a performer named RedCloud, “It’s hot, real hot. How hot? 102, the devil wouldn’t want to stand next you.” And right now in the NASCAR Sprint Cup world, everyone is standing in line behind Harvick. After taking second place in the first two races of the season, the defending champion backed that up with the victory at Las Vegas on Sunday. And a big part of the credit for the hot start has to go to Harvick’s crew chief Rodney Childers. He knew the car wasn’t up to speed after qualifying, so he went back and looked at video of the car on the track noticed the splitter looked too low. Now, how a guy can notice that I don’t know, but it’s what these guys do, so it’s their job to notice everything little thing that might keep the car from going that precious half second faster for a lap. So Childers has a key hand in this hot start, too. The driver has a big job, but there a lot of other people involved with a team that make it a winning car, as well.

It’s true that Martin Truex Jr. didn’t win, but the fact that a single car team that is not even based in the Charlotte area (Furniture Row Racing’s shop is in Colorado) has been so strong early, is a big credit to that team as well. Truex was second on Sunday and is just one of four drivers with a top 10 finish in each of the first three races. He sits fourth in the points now, and it’s a nice feather in his cap. The No. 78 might be in line to get more than a feather (like a nice trophy sometime soon) if the team continues to run this way.

Tire Rubs (Warm)
Dale Earnhardt Jr. keeps flirting with the hot stuff, but for now he just has to settle for being extra warm. Junior finished fourth Sunday and while he spent a lot of the day in the top 10, he was no match for Harvick and led just four laps. So, he wasn’t super fast, just pretty fast. The good news for Junior fans is that there was a hint of frustration in Junior’s voice after the race simply because he didn’t win. And that’s good news, because other than Harvick, the rest of the field should feel something at least a little similar for not finishing in first. That’s what it is all about.

The other driver on this very warm list is Joey Logano, who joins the other three aforementioned guys as the only drivers to finish in the top 10 in each of the first three races. Logano ended up 10th on Sunday, so he wasn’t great when he most wanted to be, but he also did lead 47 laps, so you know the No. 22 team is still pretty close to being on top of its game. And since the Daytona win put Logano in the Chase, the team can take a gamble every now and then with the setup, so it’s OK to go for the win and miss on the guess, rather than stay conservative and know it will finish fifth or sixth.

In the cooler (Cool)
The main reason that Jeff Gordon is not in the bottom category here is that it’s not a matter of if he has had fast cars or not. It is a matter of him having some bad luck in these first three weeks. Gordon qualified on the pole this weekend, but then got caught up in a wreck in final practice when Danica Patrick spun in front of him. The damage to Gordon’s car forced him to go to the back of the field. All that did was bring out the Danica-haters on various social media sites, but in reality, it was just another item to put on the list of unfortunate events that have happened to Gordon early in the season.

There were high hopes for Carl Edwards as he moved over to Joe Gibbs Racing this season, starting a new team in the No. 19 car. But there has been little for Edwards to be happy about so far. That was punctuated by the accident that he admitted was his fault on Sunday. Hey, accidents happen in this sport, but when you come in with high expectations you don’t want to be the one causing them. Edwards has plenty of time to rebound, and it’s a good bet that he will this season.

Parked in the Pits (Cold)
It’s kind of sad really, that Tony Stewart has a regular spot in this section.  There was reason for hope of improvement when he qualified 12th Sunday, but it was evident from the very beginning that Stewart was fighting an ill-handling vehicle as the No. 14 car looked more like it was going in reverse than forward. Of the drivers competing for the Sprint Cup championship who have been in the first three races, Stewart is last in the standings. Officially it’s 34th, but you know it’s not good when Brian Vickers has run one race, and Brett Moffitt (yes that Brett Moffitt) has run two races and both are ahead of Stewart.

Make it 0-for-3 (or 3-for-3, depending on how you measure it). But yes, Erik Jones, in the Xfinity race on Saturday, became the third driver in three weeks to find a wall that was not protected by a SAFER barrier. Jones’ hit wasn’t severe, but the point is it could have been. There were comments on social media saying today’s drivers are too soft and should deal with the reality of concrete walls like the old days. Yes, like the old days where you can go right down the list of drivers who lost their lives or were severely injured running into those concrete walls. I’m not sure which is more stupid, those comments saying the concrete walls are OK or the tracks which make millions not spending some of that money to have SAFER barriers installed?