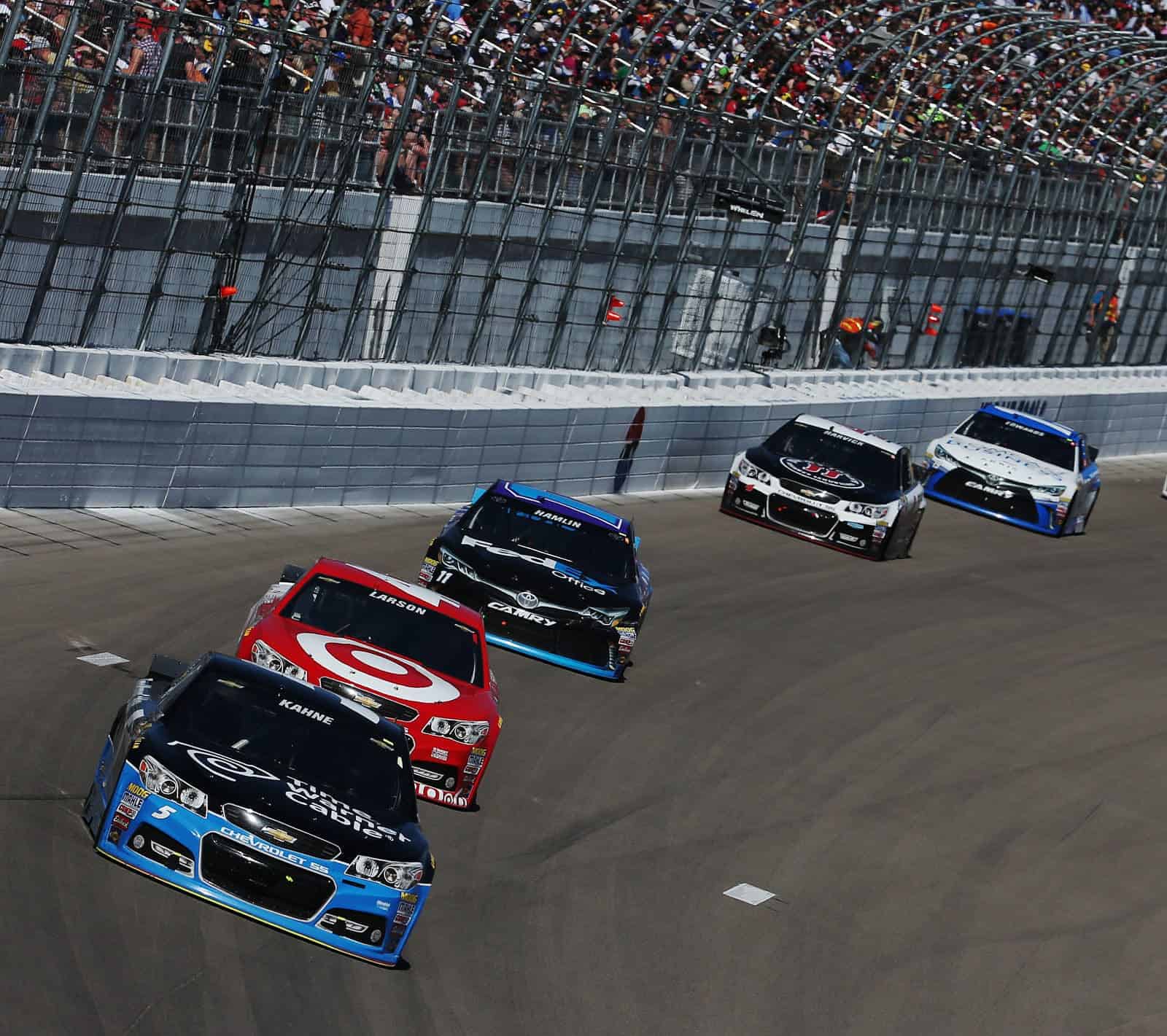 Did You Notice? … Three of the top 5 drivers in laps led this season are from Hendrick Motorsports? So far this season, as NASCAR evaluates its new rules package, it’s been a case of “status quo” near the top of the leaderboard. A quick look at the top 5 in laps led…

Logano, from Team Penske, is the only driver up there who doesn’t use a Hendrick chassis and engine. In fact, when you take him out of the equation, the rest of the field has combined to lead 75 laps. No one from Joe Gibbs Racing has led more than 18 (Denny Hamlin) while the Gibbs group has combined for just three top-5 finishes to date. Matt Kenseth has still not won a points-paying race in the Cup Series since 2013, while the new team of Carl Edwards has yet to record a top-10 finish.

You’d expect the growing pains at Joe Gibbs Racing as it expanded from three to four cars, switched crew chiefs like a merry-go-round in the offseason and lost one of its key drivers, Kyle Busch in a Daytona wreck. But I don’t think anyone thought the gap between JGR and the Hendrick juggernaut would be this vast, this early on in the season. It’s clear there’s some catching up needed.

Harvick, basically a “lone wolf” for Stewart-Haas Racing at this point, joins Logano and Brad Keselowski as the main threats to Hendrick dominance. Keselowski, though, has been a bit off, with an engine failure at Daytona, a tire penalty at Las Vegas and an average start of only 20.7. That leaves the other two, one a defending champ and the other a Final Four competitor last year, whose title hopes were destroyed by a bad Homestead pit stop.

What does that all add up to? Two words: status quo. While Martin Truex, Jr. and AJ Allmendinger have been pleasant surprises, in particular Truex, they’re both still a step or two away from Victory Lane. With a combined five laps led, the teams are showing the consistency preached within the Richard Childress Racing alliance – making the most out of their speed, a philosophy that got Ryan Newman into the Final Four last year.

Will surprises pop up? Sure, but so far it’s not looking likely. Harvick has dominated Phoenix in recent years, expects to do so again on Sunday and then Fontana has typically tilted in a Hendrick direction. Then comes Martinsville, a track where Johnson, Jeff Gordon, and Dale Earnhardt, Jr. have been in control. You get the picture…

Did You Notice? … We still have no concrete answers on when either of the Busch brothers are going to return? Kyle Busch switched out his casts for boots Tuesday, a clear sign his legs are continuing to improve. However, it’s going to be weeks before simple tasks like walking, let alone driving a race car will be back on the agenda. David Ragan has run a pedestrian 18th and 22nd in Busch’s absence. NASCAR has also not indicated whether Busch will be Chase eligible once he returns, a very unlikely scenario considering the number of races he’ll miss.

Ditto for Kurt Busch, whose reinstatement remains in question after a Delaware district attorney cleared him of criminal charges. There’s a growing movement to get Busch reinstated but NASCAR remains mum on A) the terms of his reinstatement and B) whether the timeline has shifted based on the latest developments. It also appears unlikely Kurt would be considered playoff eligible, again considering the number of races missed. Could you imagine if people started getting cleared for the Chase based on 13 starts? What’s the limit? Subjectivity on this matter in terms of a “waiver” takes NASCAR a step back from what has been a big step forward in clarifying rules, both on the track and on pit road.

Smoke has been in a decline that started before the Kevin Ward incident and even before the leg injury. He has won four races since the 2011 title run, two of which were very early in 2012. Very rarely has he been in contention at the end.

I think all the distractions,,, team owner, track owner, leg injury, Ward incident, have finally caught up with Tony. He can no longer concentrate solely on being a driver.

Smoke needs to decide if he’s going to be an team owner/track owner/promoter or a driver because he’s got to much on his plate to do well at all of them.

Nascar’s bank account is full, the Hendrick/chevy cars are winning……..so what’s the problem? All is how it should be.

Now bend back over and grab those ankles…..and shut up.

Yup, the world is now as it should be…lol.

I wonder how much of the ratings/revenue increase this year will be due to it being Gordon’s last season. I’ve been saying for years that there are a lot of Jeff Gordon fans who probably aren’t racing fans, and definitely aren’t NASCAR fans. They’re not going to give a flying crap about some aero extravaganza at Cloneville Speedway next year without their guy in the field. Normally I don’t care about the numbers, but they should be fun to watch about a year from now.

It will be interesting to see how that plays out. I stopped liking “NASCAR” oh, probably when they introduced the COT which IMO made the racing awful and when NASCAR started doling out penalties to the drivers for speaking their minds. At that point, for me, it was all about how long was Gordon going to race. I honestly thought he was going to retire when the DuPont sponsorship ended but he surprised me and kept racing and I keep watching so long as he’s out there.

I won’t pick another driver to invest my time and energy on, the current nonsense that NASCAR has become is really not worth my time. I had to laugh at the article by Lee Spencer about how THIS car is a work in progress. NASCAR has been saying that since the COT was rolled out and each change was supposed to “improve the racing”. Well, they haven’t got it right yet and I doubt that they will “next year” either.

Maybe next year I’ll be one of the “casual” fans that Brainless has been so trying to capture which means I can follow it via the internet and won’t bother to spend $$, but I doubt it.

No doubt that Gordon got me into NASCAR but I would have stuck with NASCAR if they wouldn’t have changed so much when Brian took over. Each year since, each change he’s made has been the opposite of what I wanted the sport to be. By the 3rd year of the chase I knew I wasn’t happy with the direction the sport was taking. When they started with the wave-arounds, double file restarts and fake cautions I realized that Gordon was the only thing keeping me watching. Still, I ate what I was served.

So yeah, my devotion to NASCAR will be much less starting next year. Just remember though, NASCAR made me a fan of Gordon and not of NASCAR the “sport” (or what I call now reality television show). Prior to all those changes I considered myself a NASCAR fan who cheered for Gordon. I won’t feel the need to buy any more NASCAR stuff. I will still watch some races (many via dvr, no commercials) and still read about it. Hopefully I will be that casual fan that they seem to care about so much.

Amen, Possibly more perception than reality but Nascar seems more manipulated with each passing year. As a race nears its conclusion I find myself wondering if the outcome will be decided by the drivers or by NASCAR’s obsessive need to attempt to create excitement. I ask myself if NASCAR does not consider the racing exciting enough on its own why would we?

Smoke needs to get in shape! It is like hw wants to go full bloated AJ, lol!

I like Smoke a ton, but compare him to Jeffie (as done above) and there is no contest in their physical shape. Tony get a personal trainier man! You are in your 40s, you have to work harder to keep up with he 20 yr olds! (I am 45 and feeling the same pain!)

Smoke needs to get in shape! It is like hw wants to go full bloated AJ, lol!

I like Smoke a ton, but compare him to Jeffie (as done above) and there is no contest in their physical shape. Tony get a personal trainer man! You are in your 40s, you have to work harder to keep up with he 20 yr olds! (I am 45 and feeling the same pain!)

I think the slight TV ratings increase is due to the lousy weather we have had. We can’t do anything else so we might as well watch whatever is on TV. The racing has not been good unless you like to see one driver or another dominate a race. I expect the bottom to fall out when the weather gets good and people can get out and do other more interesting things.