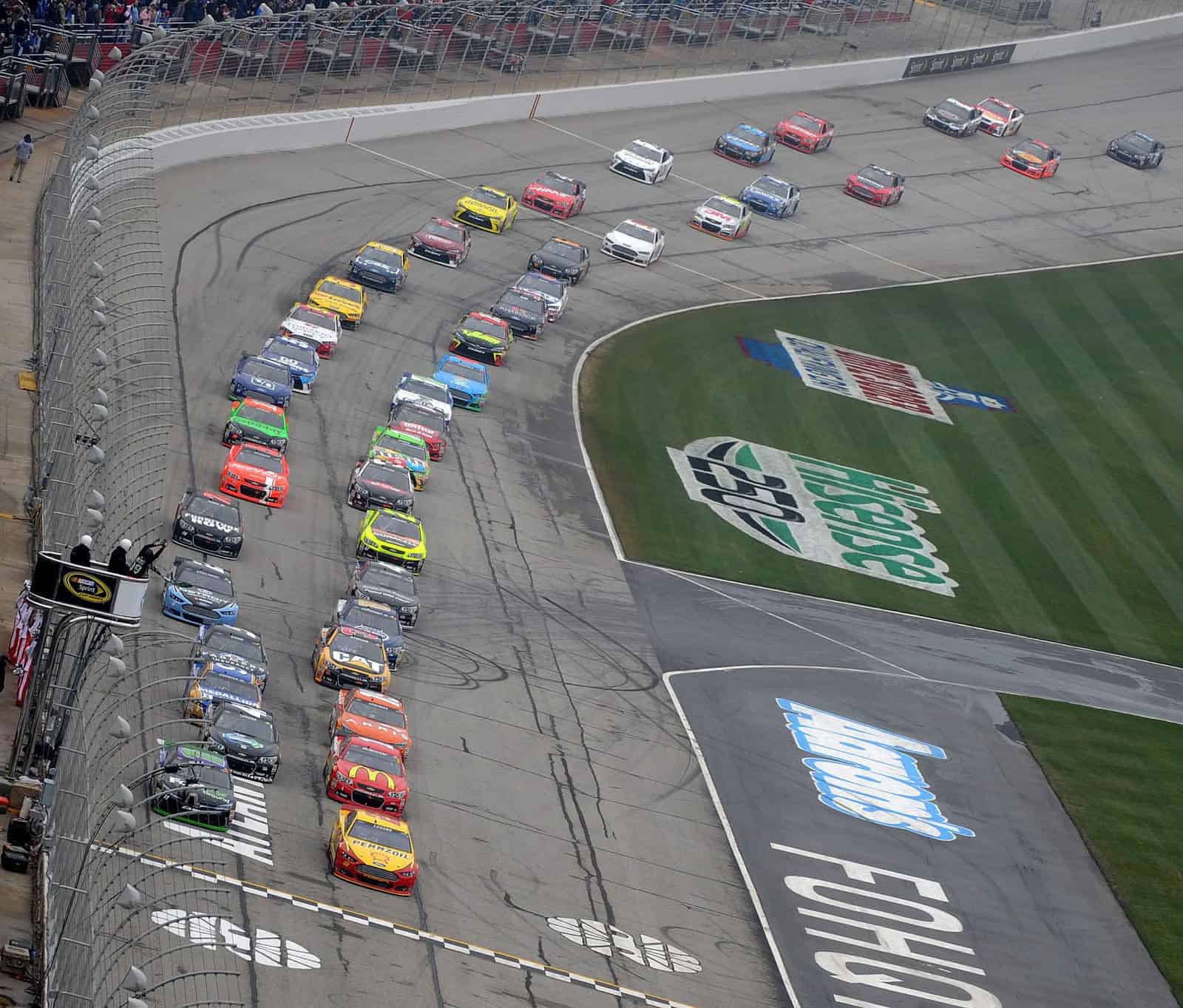 Welcome to the Frontstretch Five! Each week, Amy Henderson takes a look at the racing, the drivers and the storylines that drive NASCAR and produces a list of five people, places, things and ideas that define the current state of our sport. This week, Amy has been thinking about the season so far and has some questions.

Is it too early to name a title favorite?

Well, kind of. But at the same time, if anyone is going to make a run at Kevin Harvick, they haven’t shown their hand yet. Sure, there’s Jimmie Johnson, but he’s already having the same issues that plagued him in 2014 with tires. Johnson is going to be a threat if, and only if, those issues can be rectified once and for all; he clearly likes the rules package NASCAR presented to teams this year. There’s also Joey Logano, who came oh-so-close in 2014 only to have pit problems in the final race. Logano (along with Team Penske teammate Brad Keselowski) is a force to be reckoned with, but Harvick has been on a plane of his own stretching back to the end of last season. It might be too early to call, but he’s made the statement that the road to the title runs through the No. 4.

On the flip side, can Jeff Gordon rebound and make one last run at it?

The easy answer is of course he can. All he has to do is score a win, something Gordon has done 90 times before, and the Chase is on. But the not-so-easy truth is sometimes a streak of bad luck can be incredibly hard to break out of, despite having the best equipment and a talented driver. If Gordon wants advice on that, all he needs to do is holler across the shop to teammate Kasey Kahne, whose ongoing battle with the luck fairy has stretched over much of the last two seasons. Gordon made a case for himself last year – and, had NASCAR not changed the game on him, might be breathing the rarified air of seven titles – and could certainly take home his fifth career championship. So, right now, call it a 50-50 proposition. His is a ship that can be righted, but rough seas are not easy to navigate.

Car counts are up, but will it last?

Many races last season featured the 43 cars it takes to fill the Sprint Cup field and nothing more. This season, Cup car counts are up; 46 cars are on the entry list for this weekend’s race in Phoenix, and we’ve seen as many as 49 attempt to make the field. The problem is, though, that the new teams are all small and, for the most part, underfunded. If some of those teams miss too many races, they’re unlikely to stick out the entire season. The No. 30 of The Motorsports Group has withdrawn from the Phoenix race; that team had planned a full schedule. The No. 29 of RAB Racing hasn’t made a race yet this season, though it will try again this weekend. Sponsorship for those teams can range from little to nonexistent, so they don’t have the funding to keep trying if they miss multiple races.

The higher car count, while tenuous, does put some pressure on the field in qualifying, something that was lacking last year. With a limited number of provisional starting spots, only a handful of drivers are guaranteed a place in the race. Some teams, particularly those in the middle-tier who hadn’t spent as much time on qualifying trim last year, have improved that aspect of their game out of necessity, and the results are paying dividends at the end of the day on Sunday. That’s good for the show overall.

Can a single-car team crash the party?

Perhaps this year the question should read “can more than one single-car team crash the party?” because we already know the answer to the original thanks to AJ Allmendinger and his 2014 Chase bid. Allmendinger is most certainly a threat again this year, as his team’s alliance with Richard Childress Racing has made it even stronger than last season. Plus he showed what he can do on a road course. A road course win is probably Allmendinger’s best bet for entry again this year (though he’s currently fifth in points). A slightly longer shot is Casey Mears, who would likely need a win to make the show, but is capable of taking one on a restrictor-plate track, where he shines.

But can one of these smaller teams race into the Chase on points? If Martin Truex, Jr. has anything to say about it, that suddenly looks like a possibility. The No. 78 has been running like a house afire, and the team did race into the Chase without a win in 2013 with Kurt Busch behind the wheel. Truex has run well inside the top 10 every week this year and has shown no sign of weakness thus far. So, at the end of the day, the answer is that not only can one single-car team make the Chase, but, if the stars align properly, two or maybe even three of them could crash the party at the top. If everyone loves an underdog, that would make for a dream season.

The good thing about the current Chase system is that a driver can miss a race or three and still be eligible for the Chase if he or she meets the requirement of winning a race and being inside the top 30 in points. That keeps drivers from racing hurt and ultimately posing a danger to themselves or others on track. But this year, the policy is being put to the test by the Busch brothers. For Kyle, the question is how many races a driver should be able to miss and still make the show. More than a month is really too many for consideration, but the reality is that if a driver misses significantly more than that, the top 30 requirement will be tough to meet anyway.

What has many scratching their heads, though, is why car owner Gene Haas thinks NASCAR will issue a waiver to Kurt Busch after a suspension. And why should it? While the sanctioning body may have jumped the gun in suspending Busch without him being charged with an actual crime, the driver is suspended. If NASCAR had, upon hearing that Busch will not be charged, reinstated him and admitted error, then there might be an argument for letting him be eligible. But as it stands, it’s a no-brainer. If Busch is allowed in, then what about a driver suspended for violating the drug policy? Or for some other infraction? That’s far too slippery a slope to start down, and if NASCAR is taking a stance that Busch will remain suspended, then he should not be allowed an exception in the Chase. That goes for any driver suspended for any reason; it’s not a question of whether Kurt Busch is deserving, but of consistency and credibility for NASCAR.

and of course NASCAR is KNOWN for its credibility and consistency, so we can expect that they will always do the correct thing.

Excuse me, while I get up from rolling around in laughter on the floor.

You’d have to point at the reason for NASCAR requires drivers to attempt all races to be Chase-eligible before you could determine which exceptions you’d make. What is the purpose of the rule?

The precedence has been set.
Busch has been reinstated and deemed chase eligible.
No admission of effing up by NASCAR in suspending him in the first place.

To me, the rule concerning the chase was mainly to prevent a team from making the chase if Boris Said won at Sonoma, or like several years ago when Trevor Bayne won at Daytona, or something of that nature…where someone who is clearly not a full-time driver wins a race. As long as a driver and team run most of the races, I think they should remain chase eligible.

NASCAR should just make an official rule–Allow Drivers to miss 3 or 4 races and still be Chase eligible as long as they meet the Top 30 Requirement. More than that, no. Put it in the rule book and be done with it. Since it wants to be the NFL, it is no different than teams resting their starters for the last week or two. Let the drivers heal, get over an illness, serve a mini-suspension (this actually makes it easier for NASCAR to park a driver for a race or two without messing up his post-season eligibility) This would allow Vickers, Kurt Busch, Denny Hamlin in 2014 to be eligible, but would keep Kyle Busch on the sideline, which is probably just in all instances.