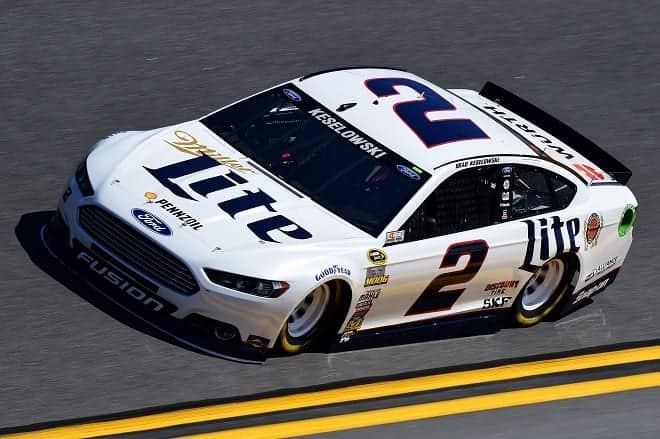 With three races down in the 2015 season (two if you’re only counting the new rules package), it’s clear to see this year has picked up pretty much right where 2014 left off. Kevin Harvick in the No. 4 Chevrolet is as fast as he was when he took the title  in Homestead at the end of 2014. He won at Las Vegas in convincing fashion, leading 142 laps, and now sits atop the series standings. Joey Logano in the No. 22 Ford is also quick, notching a solid win in the Daytona 500, and has been a real contender each of our three races so far this season. And who can forget Jimmie Johnson? Johnson and team won in Atlanta, led the field for the better part of the race, and he and crew chief Chad Knaus are looking like they haven’t missed a beat since the 2014 Chase, even if the pair struggled with tires at Las Vegas.

But what is puzzling is the lack of speed, and more so the lack of quality finishes that have come out of the Stewart-Haas Racing and Team Penske camps outside of the No. 4 and No. 22 machines respectively.

This weekend,  three-time Sprint Cup Champion Tony Stewart has been outspoken about his feelings on the new rules package NASCAR has enacted this season; including the in-car track bar adjuster, reduction of horsepower,and reduced downforce. On his driver communication channel during Sunday’s Kobalt Tools 400, Stewart told crew chief Chad Johnston that the car reminded him of driving around in a late model car in a charity short-track event. Not happy at all with the changes, Stewart didn’t hold back on what he thought of NASCAR’s alterations to the car in hopes of improving on-track competition. Trust me if you haven’t heard his profanity-laced tirade, check it out; it’s worth the listen. Stewart’s best finish this season is a dismal 30th, and things just seem to progressively get worse each week for the No. 14 team.

The same notion applies to Team Penske and the No. 2 Ford of Brad Keselowski. The “Blue Deuce” hasn’t been as dominant as its younger counterpart in the No. 22 machine, nor has Keselowski had the speed to stay in the hunt during the race. His best run of the 2015 season, however, did come this Sunday at Vegas where he posted a seventh-place finish.

And this weekend we continue the West Coast swing as the traveling circus that is the up Series heads to the desert of Arizona and Phoenix International Raceway. Who was last to win at Phoenix? Oh yeah, Kevin Harvick. Twice.

And with that let’s jump into this week’s questions…

Q:  I know a bunch of the Cup drivers didn’t make into qualifying at Atlanta. Why is it taking NASCAR so long this year to get cars past the inspection process? And what actually is tested or inspected in “inspection” at each race track? – Henry, Ormond Beach, FL

A:  Hey Henry, what happened back at Atlanta prior to qualifying shouldn’t have happened. As many veterans of our sport have said “it was an embarrassment”. The case is with the new rules package and all  the changes that have been enforced on these cars (starting with Atlanta), so many cars had issues, and as such they needed to go back through tech inspection again. NASCAR has already said that this will not happen again and that it will be re-evaluating the pre-race tech inspection procedure to make sure that it doesn’t. All in all, 13 cars didn’t make it through inspection.

To your question on what is evaluated in tech inspection each weekend, a number of things are checked on each car, more than just the body templates of each manufacturer. NASCAR checks each car’s safety systems and features to ensure that all parts are in proper working order and that it fits the guidelines set out by the 2015 rule book. If a team fails just one part of the inspection, it has to go back, fix the issue and come back through inspection until the issue is resolved.

To help with speeding up pre- and post-race inspection, NASCAR has built-in more technology into the inspection process than more fans even realize. The cars are put up on a platform where a laser system measures the entire car. Each car has an RFID chip (Radio Frequency Identification) on the car which is connected back to NASCAR R&D in Concord. The RFID is scanned and can transmit all the information of that particular car back to the R&D Center for their records and testing.

Q:  Just curious, I’m planning on heading out to Las Vegas for the race next year and was wondering where the teams stay? Do they stay right downtown, or closer to the track somewhere? – Traci, Muncie, IN

A:  Out in Vegas many of the teams do stay right there on the Strip. If you’re familiar at all with Las Vegas, you’ll know that the Strip is really where all the major hotel/resorts are located, and during race weekend there a lot of race-related events that take place down at those casinos.

I do know that teams like Stewart-Haas Racing stay at the MGM Grand, and Michael Waltrip Racing usually stays over at the Monte Carlo. In fact, if you drove by the MGM at all during race week you would have seen photos of Tony Stewart, Kevin Harvick and Danica Patrick with their cars up on the giant screen in front of the resort right on the Strip. Pretty phenomenal place to host any event, but to bring NASCAR racing and the energy and excitement of Vegas together is really just the “perfect storm” for a weekend. There’s plenty of opportunties for autographs and driver/team interaction during the Vegas week even outside of the track. Have a blast out there next season!

Have a question? Email me at greg.davis@frontstretch.com, and make sure to check back next week when we’ll answer your questions on all things NASCAR. Until then, enjoy the racing this week from Phoenix!