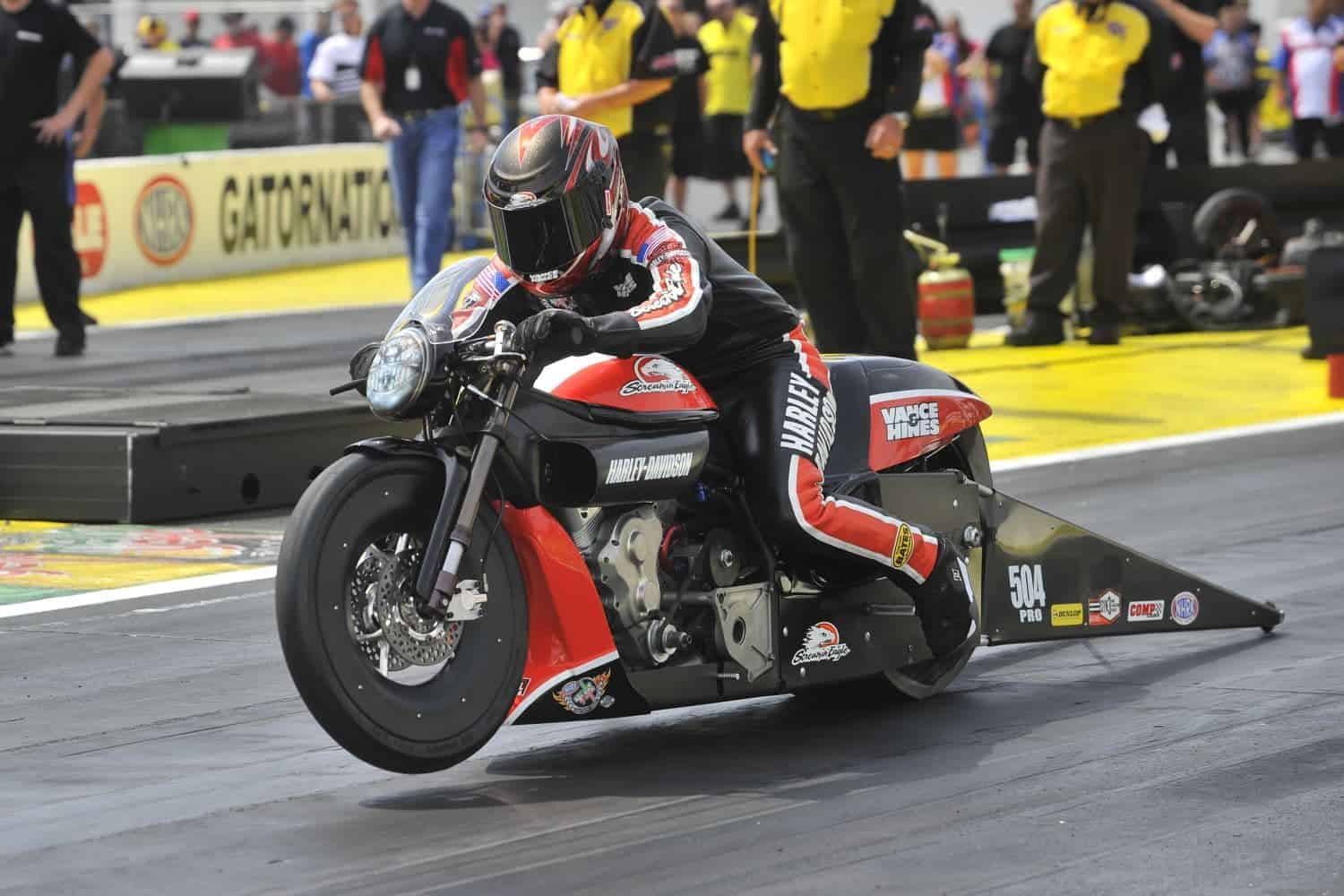 NHRA drag racing returns to action this weekend for the Amalie Motor Oil Gatornationals, much to the glee of fans who faced a three-week layoff, seemingly right after the season got started. Late in the year, as things are winding down, a few weeks off might go by a little more unnoticed, but after sitting through the offseason, folks get a little antsy during the wait. For those who have endured a long and snowy winter, racecars are also a sign of the coming of spring.

There are a number of things to follow this weekend. For one, this is the first event of the 16-race schedule for the Pro Stock Motorcycle category. Today’s profile driver, Angelle Sampey, kicks off her first full season since 2008. The Vance & Hines Harley Davidson duo of Andrew Hines and Eddie Krawiec yarded the field last year, but have some of the others caught up over the offseason?

In Pro Stock, can unlikely points leader Rodger Brogdon, leading for the first time in his career, keep the momentum going? Will rookie driver Drew Skillman, who made it to the finals and the semifinals in his first two races, continue to impress?

Can Jack Beckman and John Force start the turn around they need to get into the top 10 in Funny Car points? Matt Hagan has won the first two races of the season and pulled out to a stout early points lead, making it even harder if one is playing catchup.

Morgan Lucas is looking forward to his first race of the season in Top Fuel, but running just a part-time schedule doesn’t mean he’s not a threat. He won two of the seven races he ran last year, including the season finale at Pomona, the last event he participated in. Defending Gatornationals Top Fuel winner Doug Kalitta is hoping to win the event for the fourth time and put his name on a select list that includes Joe Amato, Larry Dixon, “Big Daddy” Don Garlits and Tony Schumacher.

On another subject, plans are in the works to include a Tech Facts section in Nitro Shots in the future. Teams in all the Pro categories have offered to help out with this so a question to you, our readers: Is there anything about the vehicles in any of the four Pro categories that you would like to know more about? You can post your questions in the comments section or email them to me at toni.montgomery@frontstretch.com and we’ll do our best to include the answer in a future edition of Nitro Shots.

*Alan Johnson Racing and Shawn Langdon, the leader in Top Fuel points, will race at the Gatornationals this weekend even though the team is still searching for sponsorship. Langdon won the season opener at Pomona and made it to the seminfinals in Phoenix, hanging on to the points lead. The team hoped to show potential sponsors what they were capable of at the first two races, and although funding is not yet in place, it is also still the goal to race the entire season and compete for the 2015 championship, prompting the decision to go to Gainesville without sponsorship.

“Racing the entire season and competing for the 2015 NHRA Mello Yello world championship is still our goal,” said team owner Alan Johnson. “We are racing in Gainesville to provide a little more time to put a program together that will allow us to do that. We enter every race with the goal of winning it, and we are going to Gainesville with every intention of winning the Gatornationals.”

*Khalid alBalooshi, Langdon’s former teammate from last season, will also return to the track this weekend with the Precision Turbo and Engine team in the Pro Mod class. It’s not an unfamiliar place to be as alBalooshi was the 2011 NHRA Pro Mod world champion before moving to Top Fuel for the last three seasons. He’ll be behind the wheel of a 1968 turbocharged Camaro. The Pro Mod schedule features 10 events and concludes in October in Las Vegas. What exactly is a Pro Mod? Here’s a taste from last season featuring alBalooshi’s teammate, Don Walsh, Jr.

Driver of the Week: Angelle Sampey

2002 – Won third championship and became only the second rider ever to win three consecutive titles (Matt Hines was the other); tied Shirley Muldowney for most championships earned by a female competitor at three.

2001 – Surpassed Shirely Muldowney’s 18 wins to become the winningest female in NHRA history; won second straight NHRA championship; scored seven total victories, the most ever by a female competitor in one season.

2000 – Earned first NHRA championship, only the second female to to win a title along with Shirley Muldowney; five wins in eight final round appearances.

1996 – Made her NHRA debut and advanced to semifinals in Denver. Claimed her first win in her first final round appearance at Reading, only the fourth race of her career. Finished seventh in points despite missing the first six events of the season.

Some Things Most People Don’t Know About Angelle: Her hobby is mixed martial arts. Sampey’s 41 wins are the most for a female driver in NHRA history. They are also the second most in NHRA Pro Stock Motorcycle. She trails only Dave Schultz who has 45. Being so close to the overall win record for Pro Stock Motorcycle was a large part of the reason Sampey came out of retirement. Her goal is to hold that record.

“My ultimate goal is to get some more wins under my belt,” said Sampey last fall at zMAX Dragway in Charlotte, N.C., where she announced her return. “When I left seven years ago, the only thing I hadn’t accomplished was to be the winningest racer. I was the winnningest female, I won championships, I set world records, I did everything I wanted to do, but that title of the winningest female, I didn’t want that. I wanted the winningest racer and the only way to get that was to get back out here. Whether or not that’s going to happen I don’t know because the level of competition these days is unbelievable. I may never win another race but I’m going to try to.”

Our celebration of the return of the Pro Stock Motorcycles to kick off the 2015 season continues. They are the one remaining Mello Yello series vehicle left to take a closer look at. Check out the anatomy of a Pro Stock Motorcycle in the graphic below provided by the NHRA. One of the most fascinating things to keep in mind about the riders of the two-wheeled hot rods is that unlike their four-wheeled counterparts, they do what they do without the benefit of seatbelts. Consider that these motorcycles go nearly 200 mph and the riders steer them by shifting their body weight.

Coughlin family members, including John, Troy, Mike, Jeg Jr. and T.J. have combined to score 107 national event victories since 1990. They have won in nine different classes: Pro Stock, Pro Stock Truck, Pro Mod, Comp, Super Stock, Super Comp, Super Gas, Top Sportsman and Top Dragster. Mike, Troy and T.J. will be racing at the Gatornationals this weekend. Mike will be running in Top Sportsman while Troy and T.J., father and son, will compete in Pro Mod.