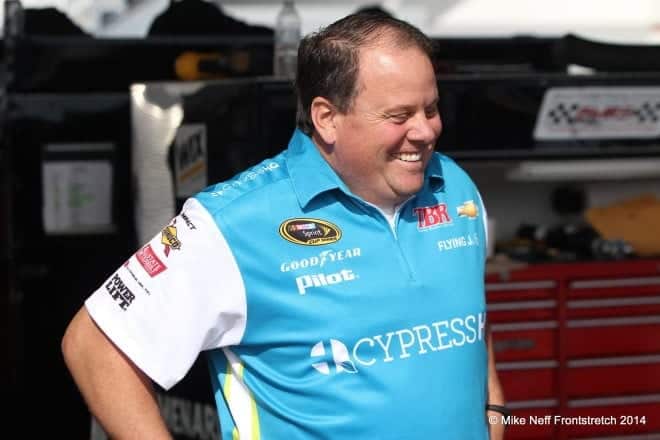 The challenges of racing a small team against the goliaths in the garage area of the Sprint Cup series are daunting when luck is on your side. When the racing gods frown on you, it can make things seem nearly impossible. Kevin ‘Bono’ Manion has lived on both sides of that fence in his career and he is definitely on the David side of that battle these days. Manion’s No. 7 team, driven by Alex Bowman, started the season missing the Daytona 500 and then suffered an engine failure in Las Vegas. The team has been fast but luck has not been on its side and the resulting poor finishes have stacked the deck against Manion, Bowman and co. already.

This week in Tech Talk, Manion tries to come up with the words to describe the tremendous disappointment of missing the Daytona 500. He also talks a little about the tests of NASCAR inspection, the handling of the car so far with the new rules package and the surprising lack of changes to their setups so far this year. He touches on the slightly improved gas mileage and notes the somewhat surprising steps some teams have been trying so far this season at the mile and a half tracks.

Mike Neff – Vegas certainly did not go as you had anticipated. What turned out to be the engine issue?

Kevin ‘Bono’ Manion – Being on the west coast, they just received the engine this morning. We were able to ship it home with another team that was headed back to Mooresville. I’m sure they are pulling it apart now and trying to figure out what happened first. Usually when you blow up it is usually a bit of a problem to find out what came first, the chicken or the egg. The guys at the motor shop will try and determine what happened and try to move forward from there. There have been a few motor failures already this year. That is a hard pill to swallow but the car was good, we qualified pretty decent and Alex was happy with the car, it is just a terrible failure and something we didn’t need for sure.

Neff – This is the first time we’ve talked since Daytona. What are the ramifications for a small team like yours to miss that race?

Manion – It is huge, it is so sad, painful, embarrassing. We have a new sponsor with Toy State and Nikko RC cars, the Road Rippers brand and all the folks there. The list is a mile long. Words can’t even explain what goes through your mind when that is happening. For one thing it is a big payday. It isn’t the way you want to start the year. Nothing good comes out of missing Daytona. You always try to find a positive on anything. Other than having a good, fast car, everything went well down there as far as the team working together and so on and so forth. Still, with that said, it is just really hard to make some kind of positive out of that, Mike.

Neff – You’ve been to two races now with the new rules package. What has been the biggest challenge for you so far with the new box that you are working in so far?

Manion – That is a good question. We were extremely loose in Atlanta. It seemed like a lot of people were loose Sunday although we didn’t get to race very long. The less rear spoiler is certainly contributing to that. The jury is still out there as to what we’ll fight this season. The setups have been fairly similar to last year. Being a small team, we don’t have any support from any other teams. It is a learning process for sure. We’ve been pretty happy with our cars. Just a little on the loose side has been the biggest problem we’ve had in the first couple of races.

As we move forward, Phoenix is a short track so the aero isn’t as critical as it was at the last two mile-and-a-halfs. By no means is Phoenix a slow short track so aero is certainly a major part of it, but it is our first short track so to speak. We’ll see what this week brings us. All in all, I’ve been pretty happy with our performance so far on the mile and a half tracks. I was really happy with our performance at Daytona but you just need to finish races. You needed to finish the twins and we needed to finish the other day. As long as you finish and stay out of trouble you’re going to have good days. It seems like Alex is doing an incredible job. I’m very impressed with his talent and his feedback. I’ve been pretty happy with the speed in the car for just getting rolling. We’ll keep putting one foot in front of the other, taking it all one day at a time and I think we’ll be just fine.

Neff – Phoenix is a short track but it is also far flatter than any of the other tracks that we’ve been to this year. With the reduced downforce, even thought it is a mile track you’re still using it. How much of a challenge is it going to be attacking a flat track with the cars not as forced into the track?

Manion – We haven’t done any testing so your guess is as good as mine, so to speak. We’re going to approach it the same way we approached the last two races. Make a few changes from last year’s setup, but all in all the balance of the car, with the way NASCAR changed the rules, is still headed in the direction of looser than last year. They took some downforce off of the back and some off of the front but the trend seems to be looser. We’ll make a few changes from last year’s setup, give it a shot and find out where we end up.

Neff – This year they have put the tapered spaced on the engine to reduce the horsepower. On a shorter track, this one being a mile in length, what is the biggest challenge for you to get speed out of the car with the reduced air flow to the engine?

Manion – Y’know, the speeds of the cars, with the reduced downforce have actually been greater this year. They also changed the gear rule, to go along with the tapered spacer, and the corner speeds have been up. [Jeff] Gordon set a new track record last week. It is a learning curve for us, especially being a smaller team. Somebody said half of the fans probably don’t realize they changed the engine package with the speeds they are running. Every day is a new day with the new rules package. Going to a short track where I don’t think too many people have tested, period, at the short tracks. I think it is going to be very new for all of us.

Neff – One more on the tapered spacer. Have you noticed if the cars are getting a little better fuel mileage since the horsepower is being held back with the restricted flow?

Manion – Yeah, the fuel mileage has been relatively close to the year before, although it has been a little bit better. We didn’t get a good read for Vegas obviously, but it was a little better throughout practice for sure. It wasn’t a huge change but it does seem to be a couple of tenths better than it was in 2014.

Neff – You mentioned that they changed the gear rule with the new tapered spacer. They still regulate the gear, though, correct? You can’t go out and wind as many or as few teeth as you want to on that thing right?

Manion – Nope, there is still an option. There is a high and a low to choose from during the weekend that we can choose from. I did see some teams and hear some chatter at Vegas of teams trying the option gear. I did see people changing it, which generally we have not seen. We usually pick the most gear and that is what we run. However, with the new spacer there have been some teams who have seen something there that has made it worth working on.

Neff – With the smaller radiator pan in the front of the car, the front downforce has changed. Has that resulted in changes to the front end geometry or is it still the same because the car is still down on the earth?

Manion – Nope, the geometry seems to be the same. The front change was fairly minimal. What we have seen so far is that the balance has shifted a little bit loose. They did take some downforce off of the front but it wasn’t as much to keep up with the year based on what we’ve seen so far. The setups in the rear have changed for sure but the front geometry is still the same.

Neff – It seemed like everybody was able to attempt to qualify at Vegas. Did NASCAR change anything with the time or the schedule for how they got people through tech or did the teams pull back from the edge a little to make sure they got through this time?

Manion – We were one of the teams at Atlanta that failed to get through the NASCAR inspection process. It was a little embarrassing on my part but my job is to max it out based on the rules that NASCAR gives us. Especially in our situation. We try to do as much as we can to keep up with the Joneses so to speak. I think we’ve done a good job so far. This weekend NASCAR cut practice short by about 10 minutes. The inspection line opened up five minutes after practice ended and they pushed back qualifying five or so minutes. They did everything they could to get everyone through. We still pushed it to the limit. At Vegas we were the fourth car in line and the first three failed. We were the first car on pit road, which felt pretty good after missing last week’s qualifying. They opened up the garage early on Sunday to get everyone through for the race.

The rules are the rules. They opened up some tolerances from last year to this year with the laser platform. What they thought was that they hoped it would help people get through their sheet a little bit more easily. The problem is, if they say the car can go to a certain point we’re going to take every bit of it to that next level That gray area, or that cushion that they put in, we’re just using it all up.

Like I said, in Vegas we backed it down a little bit. We did fail the first time going through for the race this week so we had to roll around and fix it. Any time there are moving parts, no matter what it is, that machine some days is frustrating. Some days you go over it and it is all green. Some days you go across and there are two reds and you just shake your head every once in a while. That is kind of why they made the tolerances a little bit bigger, but if they are going to open them up, every team is going to take advantage of them. The sport is so important to get everything you can out of the rules so that is what everyone is going to do. You just have to stretch it to the limit very chance you can.