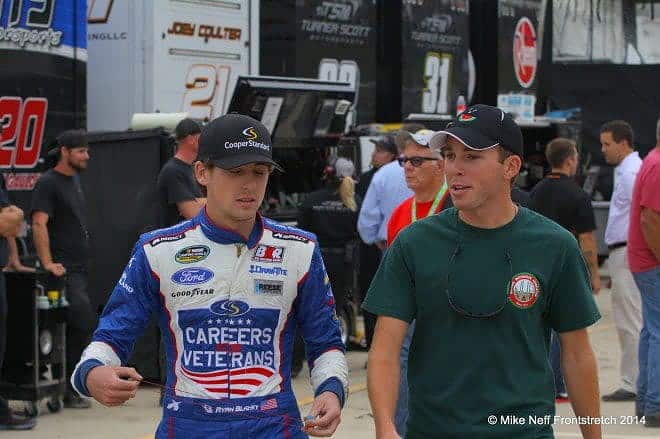 Eyes on XFINITY: Ross Chastain Building a Name for Himself

He calls his car owner “Mr. Johnny” – a sign of friendship and respect. “Mr. Johnny,” after all, has built a start-and-park team into one that contends for top 15s on a weekly basis.

Now a three-car organization, JD Motorsports has a full stable of drivers. Ross Chastain, an eighth-generation farmer, was added to the team by owner Johnny Davis over the off-season, and he has already exceeded expectations early in the fresh season. With a top 10 at Daytona, the No. 4 team started out the year on a high note. Since then, they have seen some struggles, but with a limited budget, the struggles could be worse.

At Atlanta, he finished 24th, which was a disappointing run after expecting to be inside of the top 20 like veteran teammate Landon Cassill. However, at Las Vegas, Chastain outran his teammate and finished 20th at the 1.5-mile track, even though he was running on scuff tires purchased from Cup Series teams throughout the race.

We finished 18th! After the weekend we have had I didn't think we were gonna make it 2 laps in the race. My @JDMotorsports01 boys dug deep

“Getting to run every race and run the whole race is really great,” Chastain tells Frontstretch. “It’s no secret that we have a limited budget. We had two sets of tires at Vegas, and the rest were scuffs from Cup Series teams that did mock runs. Most of my sets had just two laps on them, but our last set for the race had 10 laps on them. That was tough; 10 laps on tires is why they didn’t keep them. It’s part of doing business, and it’s what we need to do to stay alive.

“I’m on board with Johnny and everybody with the team 100 percent. I understand what we need to do to stay alive. I knew what I signed up for, and I feel like I have calmed down quite a bit from when I started running in the XFINITY Series.”

But the 22-year-old driver has high expectations for the small team, which also added Harrison Rhodes for 2015.

After shocking himself with a chance at glory in Daytona, Chastain faced the reality of running with limited funding in the NASCAR XFINITY Series. Though it isn’t something new to him after running for SS Green Light Racing in the Camping World Truck Series in 2012, he still wants to run up front, which he believes is still possible with additional money coming in.

“The bluntest way I can put it is that it would take money,” he explained. “It opens the door for more people in the shop and more road guys to help us put these cars together. Johnny owns a lot of his own motors, and that’s what I’m running – the SV2 Chevrolet motor program. Usually, it would be a lease program for your motors, with a lease program for your transmissions and gears to have the latest and greatest light weight stuff. It would take money to run better. We’re doing really well with what we have. All of our weekends this year won’t be great.”

Flex Shot came on board to support his car this season, but that won’t be enough to get them into the top 10 on a weekly basis. With a rather old engine combination, along with scuff tires, Chastain is at a severe disadvantage compared to the competition. But as crew chief Gary Cogswell and he continue to develop a relationship, the duo should start to see more success.

Prior to working with this small team, he was on track to making it to the top. Sponsorship money came in, along with a top-tier team in 2013. Brad Keselowski Racing signed the Florida native to pilot the No. 19 truck for 14 of the 22 events in the Truck Series. However, following a year of two poles, four top 5s and seven top 10s, he was told late in the year that he wouldn’t return to the organization, who opted to put Tyler Reddick into a truck instead.

“At the end of 2013, when everything when down at BKR, I was definitely bummed out about it,” said Chastain, who had two runner-up finishes with Keselowski’s team. “I didn’t know what I was going to do because I had an opportunity at the beginning of the year to go somewhere else. Brad promised me a lot of things and came through on a lot of them, so that was good. In my mind, it wasn’t a one-year deal and I thought I would have more time to learn. That wasn’t in the cards, so I had a little bit of down time to gather my thoughts and figure out what to do. It’s life. It’s going to happen with a regular job, so that’s just part of it.”

Evidently, he rebounded to run a few races in 2014 for a few smaller organizations, including Hattori Racing Enterprises, Viva Motorsports and TriStar Motorsports. Making his XFINITY Series debut at Charlotte, he raised eyebrows immediately after finishing inside of the top 20 for a Viva Motorsports team that had an average finish of 29.1 the rest of the season. Recording three top-15 finishes, Chastain proved what he wanted to, and that’s when he received an opportunity to race on the same team with a man that has been a mentor to him.

Working with Cassill, who also races full-time in the Cup Series for Hillman-Smith Racing, Chastain has leaned on him for nearly two years. Praising Cassill’s ability to take underfunded equipment and run up front, he believes that he can have similar results as he attempts to learn how to get a better handle on the XFINITY Series.

“I have leaned on Landon more than anybody as far as XFINITY drivers over this year and last year,” he said. “Before I made my first start at Charlotte last year, I went to Landon the night before in uptown Charlotte. I knew he was around and I found him during some appearances. We spoke for about 45 minutes, and I just asked him about the cars and what to expect, and what’s different about the brakes and the throttle and the wheel input. I just wanted an idea of what to expect since I didn’t know how different they were compared to a truck.”

As he looks to turn the No. 4 car into a top-15 or even top-10 team, Chastain is continuing his work with watermelon associations across America.

His father, who owns a farm in southern Florida, owns 300 acres of land of watermelons. Yeah, that’s a lot of watermelons. As a part of the National Watermelon Association, the family previously had a connection with them. While racing Late Models, Chastain approached the board of directors about helping out his race team. Initially, it gave him $500 for a set of tires. Once it saw his success, the board paid to cover his trailer with watermelons, and the rest – as they say – is history.

“When I said I wanted to move beyond the Late Model level, they said they needed to go to national television for them to see a return on their investment,” Chastain said. “That took out K&N and ARCA because there wasn’t national television for every race. The Truck Series is where we landed, and we made our first start at Indianapolis and finished 10th. We didn’t really know what we were going to do from there, but with a good finish and the promotional side that we were able to do throughout the weekend and with the numbers we got back that showed how many people followed the watermelon truck, they were hooked.”

Though watermelons have yet to appear on his vehicle for JD Motorsports, the additional funding at a low price could provide them fresh parts. The team has been utilizing old parts and pieces, with occasional new resources coming in. But the fresh face brighter than the interior of the watermelons he grew up working with is set to contend for top 10s, and wants to show why he deserves an opportunity at the top.

With a secure ride at Davis’ team, Chastain can finally breathe a sigh of relief. Comparing his situation to Cup Series drivers David Ragan and Michael McDowell, who have been given the seldom chances to race for top-tier teams after running primarily with small organizations, he hopes to continue earning solid finishes.

“The biggest thing that I looked at entering this year: running every race and getting that seat time. Last year, I ran 12 races across three different national series. I would run races two weeks in a row, but then sat out for two months. That was tough trying to remember what you did in the racecar a few months ago, and it’s just tough to watch.”

As the team starts to click, he will begin to gather attention. A chance with an organization that has won races would be the start of something special for Chastain. A driver with potential to outrun the equipment he is in seldom comes along, especially one that hasn’t been spoiled with running for gigantic organizations over the course of his career.

“I want to keep myself in a good situation for someone to pick me over another driver to fill a seat. All I can do is keep learning and stay in the seat as much as I can. I think we can take the No. 4 car and surprise even more people than we already have.”

Joseph started with Fronstretch in Aug. 2014 and worked his way up to become an editor in less than a year. A native of Whitestone, New York, Joseph writes for NASCAR Pole Position magazine as a weekly contributor, along with being a former intern at Newsday and the Times Beacon Record Newspapers, each on Long Island. With a focus on NASCAR, he runs our social media pages and writes the NASCAR Mailbox column, along with other features for the site.
Previous Four Burning Questions at Phoenix: Busch’s Return and Harvick’s Quest for Four
Next NASCAR 101: Why Kurt Busch Has a Chance at the Championship