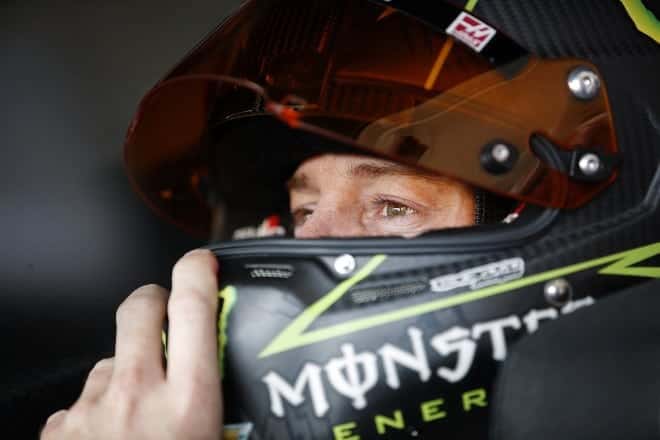 When Kurt Busch returns from his indefinite suspension from the NASCAR Sprint Cup Series this weekend, he’ll be on an even playing field with the rest of the Cup roster when it comes to winning the series championship.

That’s right: despite missing the first three races of the 2015 season, Busch may be your Sprint Cup champion when all is said and done this November. It may be an uphill battle and there’s some hoops through which to jump, but the Las Vegas native could very well hoist the trophy – or at least be in consideration for the title by making the Chase toward the end of summer.

You may still be confused. You may already understand this already and have opinions, whatever they may be. If it’s the former, read on. Latter? Comments section, pronto.

Busch can take his No. 41 for Stewart-Haas Racing into the No. 41 by fulfilling two quotas: winning a race and finishing inside the top 30 in points after the regular season ends at Richmond. He can do so because he received a waiver from NASCAR that allows him entry into the Chase should a win and a top-30 points position be in his future, despite missing three races – something that would normally keep a driver out of the Chase field (the rule keeps a part-time driver from sneaking into the Chase, as unlikely as it may be).

That means that all Busch has to do now is win at or before Richmond in September, and do so while rising from his current position of having zero championship points to being within the top 30. Currently, the 30th-place position in points after three races (with 23 to go) is held by Jeff Gordon, who has 44 points.

Aside from the obvious – as in, Busch doesn’t win at all, or wins but can’t get into the top 30 – two other scenarios could hinder Busch’s entry into the Chase. First, there’s the possibility of Busch missing more races, for whatever reason, be it injury, suspension or otherwise; Busch is still on probation from NASCAR, after all. On the other hand, a win doesn’t necessarily ensure Busch’s entry into the Chase, as if more than 16 different drivers win during the first 26 races, Busch could be on the outside looking in if he has merely one win but a low points position. Win two or more races? As long as the top-30 position is there, he’s good to go no matter what.

And that’s how he could do it. If those obligations are met, Kurt Busch, who over the past few weeks has not been in a NASCAR racecar while awaiting a decision on his alleged domestic assault case and the subsequent lifting of NASCAR’s suspension, could be a champion for the second time, 11 years after his original title in 2004.

But is it likely?

Depends on what you’re asking. If we’re talking the overall title, it’s probably not safe to bet on Busch, who has been mostly unspectacular in the No. 41 since joining the team in 2014. He showed last year he can still challenge for wins on occasion, and you have to think the iffy season last year combined with being three races behind will light a fire under him that results in better runs altogether, but a championship? He’d have to beat his teammate Kevin Harvick, and that’s sure not seeming likely right now.

A Chase berth? Now we’re talking. Again, Busch has a lot to live up to after a rough 2014, especially since team co-owner Gene Haas is helping bankroll the No. 41 team specifically for Busch to run. There will come a time when that investment does not seem worthwhile if the results aren’t there, and one has to imagine that Busch was already expected to make strides in 2015.

With that in the back of his mind, look for a rejuvenated and relentless Busch who’s set on making it into the Chase by any means possible – and then improving the program to where, once the Chase rolls around, he’s got a shot at competing.

A win?
I don’t see why not
A “chase” berth?
possibly
A championship?
that’s not going to be allowed in this life time
besides, It’s the Hendrick mothership’s turn this year.

Very happy to see Busch back, and I hope he wins this weekend. That’s the ONLY Hendrick car I’ll cheer for.

The Real NASCAR 101: There are no rules.