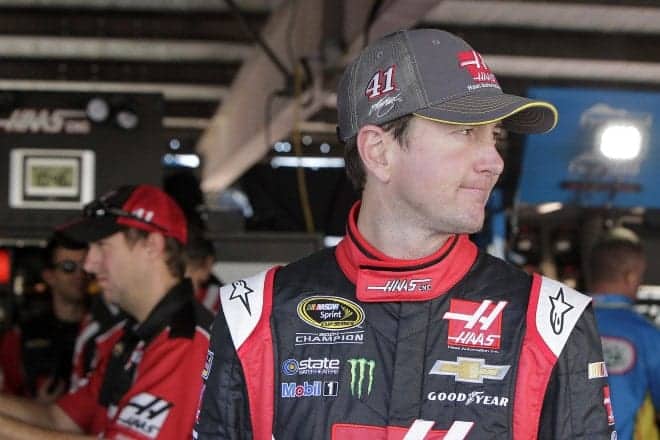 The 43 Sprint Cup series teams running at Phoenix International Raceway tomorrow afternoon had two sessions today to prepare for tomorrow’s running of the CampingWorld.com 500. The one constant throughout both practice sessions was that a Stewart-Haas Racing car was leading the pack.

Making his first start of the season after having his suspension lifted, Kurt Busch was fasted in the first session with a speed of 136.768 mph. His teammate at SHR and polesitter Kevin Harvick was third quickest. The Penske Racing and Chip Ganassi Racing cars were all inside the top 10, with the remaining drivers in top 10 being Hendrick Motorsports driver Kasey Kahne (fifth), Martin Truex Jr. (sixth) and Richard Childress Racing drivers Paul Menard and Ryan Newman in ninth and 10th. Following the first practice, AJ Allmendinger‘s team made an engine change and will start in the back of the field tomorrow.

Busch and Harvick swapped positions for the second and final session of the day, with Harvick first and Busch third. Harvick, a six-time winner at the jewel in the desert, also had the fastest five- and 10-lap average. Matt Kenseth split the SHR duo with a speed of 136.30 mph. Many of the top cars from the first session backed up their times in the second session. Joey Logano, Jamie McMurray, Brad Keselowski, Kahne and Truex Jr. were all inside the top 10. Dale Earnhardt Jr. and Jeff Gordon joined the top 10, ending the session in sixth and 10th respectively.

The next time Sprint Cup cars will be on track is tomorrow for the fourth race of the season, beginning at 3:00 p.m. ET on FOX.