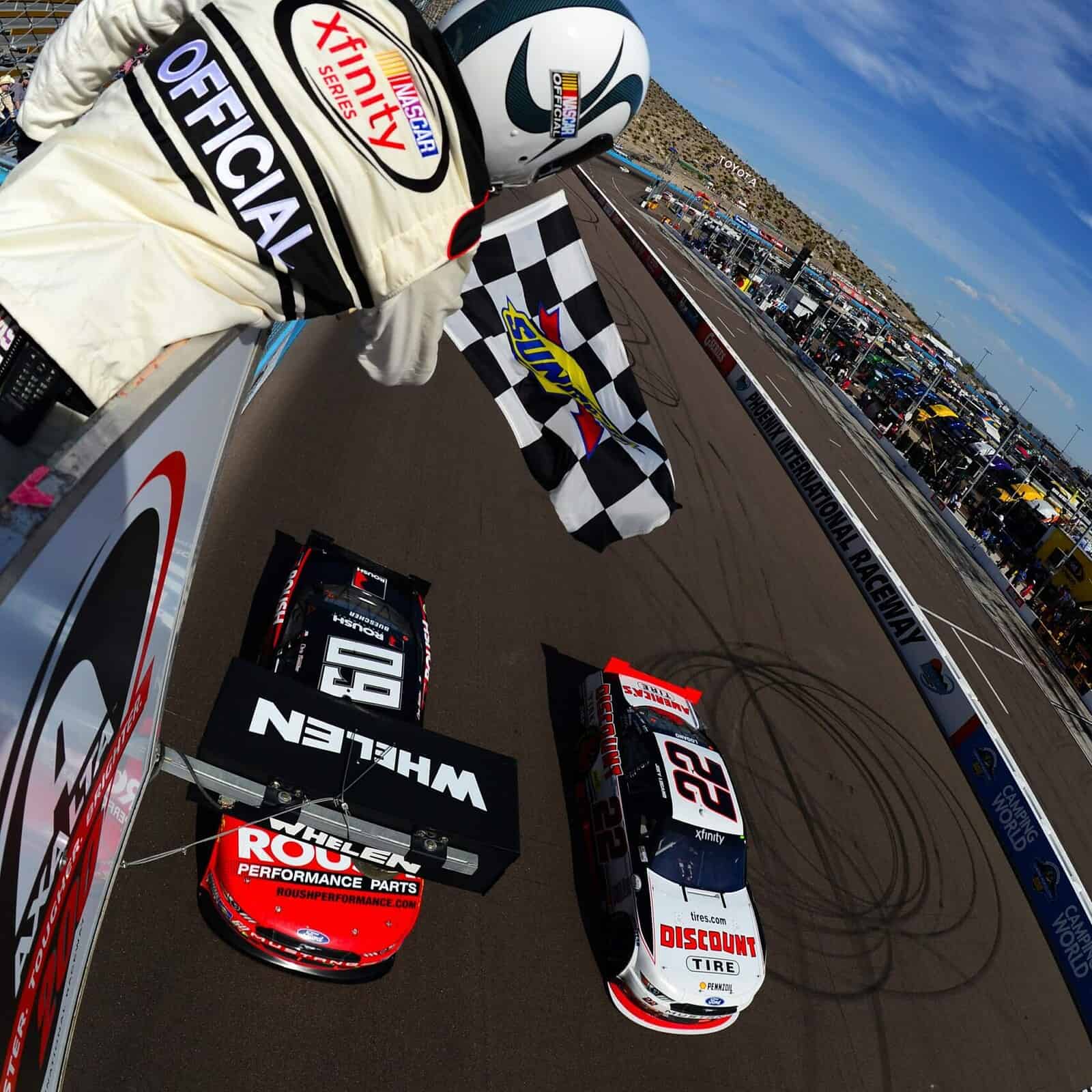 (Author’s note: Joseph Wolkin had prior commitments, today so the Frontstretch editors pulled me out of the bullpen to fill in. You’ll note I use a different format than Joseph that still might be eerily familiar to some of you longtime readers. As it stands written in the Book of Bruce: Baby everything dies, baby that’s a fact, but maybe everything that dies, someday comes back.)

The Key Moment – The green flag dropped and polesitter Joey Logano took the lead. After that it was just a matter of “put out the fire and call in the dogs” …it was over.

In a Nutshell – Well, that’s one way to waste an hour and 50 minutes of your life. Once again, a Cup star done went ahead and stole all the candy out of the NXS regulars’ trick-or-treat bags.

Dramatic Moment – Other than a brief skirmish between Logano and Matt Kenseth on a restart due to the No. 20’s contrarian pit strategy, there were no dramatic moments, just two hours of tedium as the race wound down to its preordained conclusion and ennui ensued.

What They’ll Be Talking About Around the Water Cooler This Week – College basketball, baby – this whole NCAA thing. It’s about all anybody will be talking about for the next month as March Madness grips the country. If you try to discuss NASCAR racing, much less an NXS event, people are going to look at you like you’ve got two heads.

They’ll be the usual handwringing and caterwauling over yet another Cup star posting a win in the Xfinity Series. I might even indulge in a little of each myself, but if it really frosts your flakes you’re going to need to find some other way to spend your Saturday afternoons because a long season lays ahead my friend.

I will note one thing. The vitriol over a Cup series driver winning in NXS is always a lot less when the cherry picker (aka Busch-whacker aka Double Wides aka Double-Plays) isn’t Kyle Busch. For some fans, it doesn’t seem to a matter if a Cup driver wins, but the particular driver who did the dominating. Hurry back Kyle. It’s just not as much fun to cheer the good guys when you haven’t an unsavory rascal to boo at the same time.

NASCAR and the track owners say they need Cup drivers in the NXS races to sell tickets. I hope they got a good look at the grandstands on Saturday. Five NASCAR and PIR officials could have stopped by and shook hands with everyone in the grandstands during a caution period.

I can tell you a common factor for all the folks complaining about how hot it is in Phoenix this weekend is that they don’t live anywhere around me after the winter we just endured. Low 90s? Bring it on! I’m still trying to thaw out my sled dogs.

If NASCAR scheduled the three-race buzz-kill that is the western swing to coincide with everyone watching college basketball anyway, they’ve scored a marketing coup.

I read where the team owner of the No. 44 Cup bunch, John Cohen, perhaps best known for having his racecar and rig stolen in Atlanta a few weeks ago, now has an arrest warrant sworn out against him. He says it’s all a big misunderstanding, but his lawyer says she hasn’t been able to get in contact with him on the phone, by email or on the internet. You can let your lawyer go Mr. Cohen. Just tell the judge you have Comcast Triple Play. Case dismissed.

The Hindenburg Award For Foul Fortune – It wasn’t at Phoenix, but Will Kimmel took a wild ride in the ARCA race in Alabama today. His car exited the track in turn 1 and rolled over five times. Thankfully Kimmel was all right.

NHRA champion Larry Dixon also took a wild ride down in Gainesville, Fla. His car a broke in two then got airborne and hit the wall hard at the big end. Dixon also exited his car in one piece despite the 280-mph catastrophe. See it here.

Brennan Poole was giving a fine accounting of himself until running out of gas with a handful of laps to go. Wait, was he the guy with the surfer dude haircut out of a gated community in Texas? Well, it couldn’t have happened to a better guy than the Bull.

For the second straight week, David Green finished last with the reason given for his withdraw as vibration. Really? I thought we were over that start-and-park crap. If Green was just going to throw in the towel after three laps, why didn’t NASCAR let Morgan Shepherd start the race too?

Darrell Wallace Jr. struggled most of the weekend, but a trip into the wall late in the race just added more pickles to his manure hoagie. He wound up 15th and missed yet another appointment with the guy they hired to show him how to properly peak a ball cap’s brim.

A penalty for having some of his crew members over the wall too soon dropped Brendan Gaughan laps off the pace but using a wave-around and a lucky dog, Gaughan got back on the lead lap en route to an eighth-place finish.

Dillon drove on unscathed from the contact with Elliott on his way to a sixth-place finish. For older fans that was probably the best part of the race watching the No. 3 car and the No. 9 car battling once again. A certain black No. 3 car and a red and white No. 9 car used to get in frequent dustups that were the stuff of legend in the ’80s. OK, so imagine this. The No. 3 car is leading, but the No. 9 car pinches him down low. The No. 3 car takes to the grass but never gives up the lead. It’s “Pass in the Grass 2!” I mean how many times did it work for the Karate Kid movie franchise?

Worth Noting – By lap 40 there were only 22 cars left on the lead lap.

Dillon in sixth is listed as the highest finishing driver (NXS regular) eligible for points in the race. Yeah I thought it was Erik Jones in fifth too, but the results sheet says he’s not eligible for NXS points. I don’t know why. Maybe he swallowed a fly. Or that he’s running for the Truck Series championship. (Oh, and Mr. Jones, you need to dump this “k” thing at the end of your name. This is stock car racing, not a Saturday Night Slumber Party at buffi♥‘s)

Logano has made two starts in the Xfinity Series this year. So far he’s finished second and first.

Daniel Suarez was the rookie of the race.

Logano is credited with leading 175 of 200 laps in Saturday’s race.

Gaughan, Regan Smith, Elliott Sadler, David Starr and Daniel Saurez round out the top 10 in that order. I don’t know why some of the editors used to get all over my back for not putting that “in that order” thing at the end of those sentences. I mean come on, why do you think I chose that order to type their names?

It is believed to be the first time in NASCAR’s AAA series’ 33-year history that drivers who whose last name’s start in “S” occupied positions seventh through 10th in the standings four races into the schedule. Prove me wrong and I’ll mail you a can of Beenie-Weenies.

Overall Rating – (On a scale on a scale of one to six cans of Canada Dry Ginger Ale, with one being a stinker and six being an instant classic.) Remember that picture of you in the maroon velvet leisure suit tux and the really bad haircut beside your conversion van with the Molly Hatchet murals on the side all raised up with Gabriel Hi-Jackers in the back you were hoping nobody would ever find. Well the prom date who broke your heart just posted that picture on Twitter and it went viral. And this race was worse than that! No Ginger Ale for you!

Next Up – The series heads off to Fontana for some semblance of a race next Saturday. Check your local listings for times and channels. Or you could just check the paper the next day I guess. Or FOX will let you know, because they’ve got it.

This race summary was far more entertaining than the race. Well done, Sir!

Watching my PC boot up was more entertaining than that race.

Wow, haven’t thought about them since the SoCal Speed Shop AM radio ads!

Hey go easy on the west coast tour. We may be few in number but us west coast die-hards need races we can drive to without incurring the costs of round-trip airline flights. I just pray they never repave Fontana…

Good to see your reporting format again. Are there still water coolers? :-)

Socal you’ve been reading my rantings long enough to know I don’t begrudge left coasters thiier races, I just think they ought to have some good ones, which yesterday’s wasn’t. If’n I had paid my hard earned dollars (you know how hard it is to get that much venom in a fountain pen) for yesterday’s race I’d want not only a refund but an apology. To get me back they’d have to have a helicopter pick me up at home next year and let me do Brodies in the pace car. And yes, there are still water coolers, That’s where cheapskates like me and my buddies go to refill our water bottles rather than paying a buck and a quarter for a new one at Wawa or three bucks at a race track for a seven cent bottle of water. Google Wawa, IT”s like a 7-11 where the employees can speak English.

Dennis, thanks for the kind words. If I ever write something more boring than that race I’ll quit.

Eds- thanks for the update on Eric. I’d have probably figured that out in six weeks when the trucks run again. What’s up with that, BTW the NXS race from Socal is on FS1 not Fox. Check your local listings. ;-)
What do I look like a wornout copy of TV Guide?

Yeah, that’s it, no Kyle Busch and all of a sudden no one is bitching about a Cup driver making sure a race doesn’t break out. How about an alternate theory. We have ceased watching this mess all together because it has become obvious to us that NASCAR has no intention of canceling the Special Saturday Cup Practice for an actual race. Kyle, no Kyle, stick a fork in it, it’s over. Thanks NASCAR!

Love your work Matt. Glad you are back. BTW it was Jeff Green not David Green finishing last.