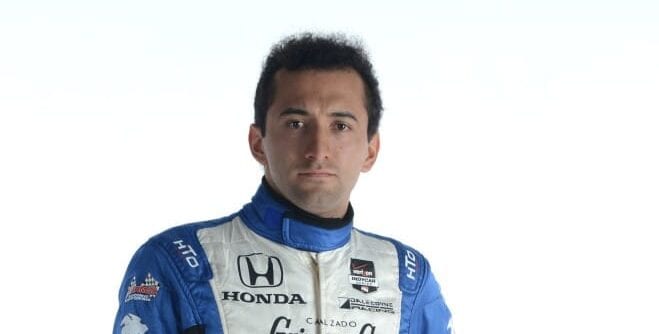 With the 2015 IndyCar season quickly approaching, a few of the vacant seats have been filled.

Dale Coyne Racing announced on Monday that Colombian Carlos Huertas will return to the team’s No. 18 Honda for a second season, per RACER.com.

“I am very happy to be back with the team this year. I expect to have a better year than last year because I obviously have the experience of a full season and winning a race last year. That helped a lot for my confidence for this year,” Huertas said to the website. “The guys did such a great job last year with the car and race strategy that I’m sure we will have a successful year.”

Huertas competed in his first full IndyCar season in 2014, scoring a surprise win in the first of two races at Houston. He finished 20th in series points. The 23-year-old also competed overseas prior to coming to America to run IndyCar. Huertas previously drove in the Formula Renault 3.5 Series as well as the British Formula 3 Series, scoring multiple wins in those divisions.

Later in the day, Dale Coyne also confirmed to The Indianapolis Star‘s Curt Cavin that Francesco Dracone will drive four races for the team.

Dracone, 31, is participating in the test session at Barber Motorsports Park with the organization. The Italian most recently drove in IndyCar in 2010, bringing home finishes of 22nd and 20th for Conquest Racing at Mid-Ohio and Sonoma.

Dale Coyne Racing is one of many teams participating in the IndyCar test at Barber Motorsports Park. Owned by former driver Dale Coyne, it was formed in 1984, running in the Champ Car series until 2007. The team has participated in IndyCar since 2008, scoring four victories.