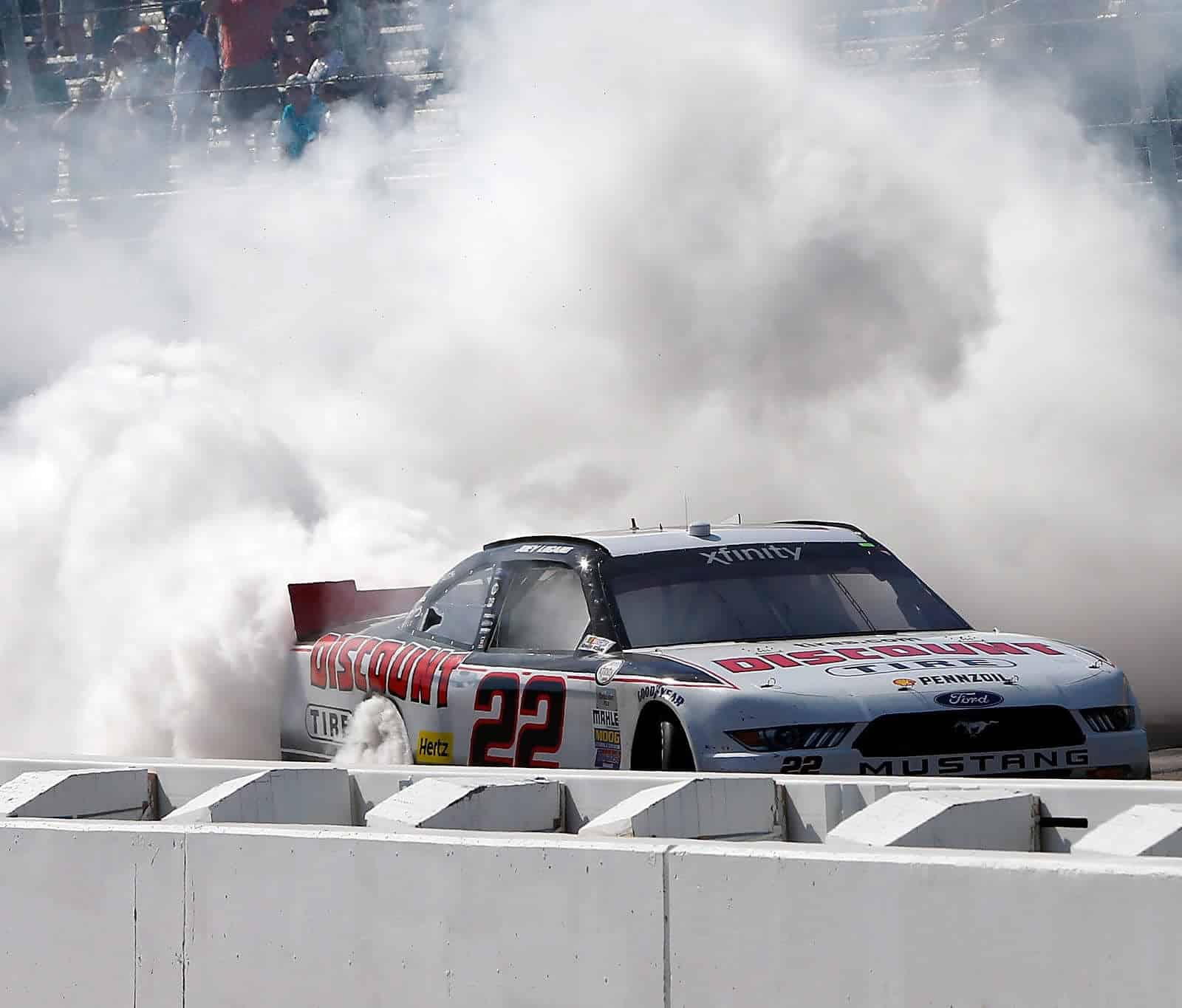 Xfinity Series: Cup Series Dominance Continues – Nothing could stop Joey Logano from winning at Phoenix on Saturday. Nothing. The unstoppable Team Penske No. 22 car has been in the top five for each race this year, and it has three straight finishes of first or second. But what is so remarkable about Logano’s feat in the Xfinity Series race at Phoenix was it became his first victory since winning at Dover in 2013.

Unlike the race at Las Vegas, no non-full-time Cup Series driver had anything for the top four. In outstanding fashion, as per usual, the Cup Series drivers dominated at Phoenix, which has been a pattern at the 1-mile track over the years.

Roush Fenway Racing struggled mightily at Phoenix after its hot start to the year. Elliott Sadler was the highest running of the four cars – finishing 12th in the 200-mile race. Darrell Wallace Jr., who has shown plenty of promise to be a title contender early in his rookie year, was the worst of the Roush cars, but remains in the top five in points.

Ty Dillon continues to be on a mission. After being ever so consistent in 2014 with 24 top 10s, he is beginning to turn them into top fives. Leaving Phoenix, he has a 14-point gap over Chris Buescher, and Fontana is another track that falls into Richard Childress Racing’s court. – Joseph Wolkin

NHRA: Oh! Snap! – The highlight reel clip of the Amalie Motor Oil NHRA Gatornationals weekend was Larry Dixon‘s crash in third round qualifying on Saturday. Dixon’s Top Fuel dragster suddenly buckled, folded, and snapped itself in half, with the front half coming to rest against the right side retaining wall while the back half, with Dixon aboard, came to a stop further down track on the left side. Dixon was not injured in the crash, but did not race on Sunday because the team did not have a backup car on the property.

As for Sunday racing action, it was a day of milestones and upsets. Greg Anderson scored his 75th career victory in Pro Stock and his first since 2012. Anderson was debuting a brand new (to the team) slightly used red Summit Pro Stock Camaro and got an extra special present by taking home a Wally on his birthday weekend (his birthday was Saturday). He beat Larry Morgan, Shane Gray and Chris McGaha to advance to the finals where he faced off against teammate Jason Line. Anderson ran a winning pass of 6.538 seconds, 213.43 mph to Line’s 6.554 seconds, 212.98 mph.

“This is the second time in our career we’ve bought a used car from another racer, completely refurbished it, put a shiny paint job on it, and it’s gone right to victory circle,” said Anderson. “It was a special day today, and a special weekend for me. It was pretty darn cool because a year ago, I couldn’t even come to this race. I was recovering from heart surgery and couldn’t even attend the race, let alone drive a racecar. It’s been quite a year for me. I’m a very lucky man to even be here.”

Karen Stoffer scored the win in Pro Stock Motorcyle, the 110th win by a female racer in the NHRA Mello Yello Series categories. Stoffer, who hadn’t raced since 2013, raced her way by Steve Johnson, Angie Smith and Shawn Gann on her way to face off against Eddie Krawiec in the finals and beat Krawiec with a pass of 6.900 seconds at 195.11 mph.

Ron Capps turned on the win light in Funny Car with a 4.115-second, 311.05-mph pass to edge John Hale‘s 4.208 seconds, 289.32 mph. Hale was making only his sixth Funny Car start and defeated John Force, who dropped out in the first round for the third consecutive race, Alexis DeJoria, and Blake Alexander to make it to his first final round before falling to Capps. Credit to Capps for having to work to get to the finals though after a semifinal matchup with Tim Wilkerson came down to a margin of victory of .0001, or roughly one inch.

Capps was not the only Don Schumacher Racing driver to welcome the boss back to the track with some hardware. Schumacher was at the track for the first time since undergoing surgery and treatment for cancer over the off-season. Two of his entries also made the finals in Top Fuel where Spencer Massey took the win over The Sarge, Tony Schumacher, with a winning pass of 3.882 seconds, 320.74 mph. – Toni Montgomery

ARCA Racing Series: Will Kimmel Walks Away – Some spectacular events unfolded in a weekend of racing at two Alabama facilities. Grabbing the headlines in the ARCA Racing Series 200-lap affair on Saturday at Mobile International Speedway was a freak incident only eight circuits in. The throttle would hang in Will Kimmel‘s vehicle on a restart, sending his machine careening off the edge of turn 1 of the track, which lacks retaining walls around the outside of much of its configuration. A concrete barrier would not even fully stop the uncontrollable car which would eventually land in the track parking lot. Miraculously, not only was Kimmel unhurt, but his destroyed car struck a trailer hitch of a pickup truck leaving the fan’s vehicle unharmed despite the impact moving it three feet.

Nearly lost in the scuffle was Grant Enfinger‘s convincing performance to become the winner of the first two series races of the season for the second year in a row, and claim his third straight jukebox trophy at the Gulf coast facility.

Short Tracks: Pretty Sure That’s Out of Bounds – A couple hours up the road on Sunday afternoon a strong field of 33 super late models took part in the Rattler 250 at South Alabama Speedway. The season opener for the Southern Super Series was marred early by a wreck that involved nearly half of the field on the second lap, eventually ending the day for defending series champion Bubba Pollard and second-generation driver Kyle Grissom.

After a lengthy red-flag period, Kyle Busch Motorsports development driver Christopher Bell established himself as the driver to beat and would go on to score the biggest win of his brief asphalt racing career and a date with a live rattlesnake as part of the victory lane festivities. Casey Smith led several laps in a valiant attempt to upset the big-name teams. The Texan would fight off Chase Elliott, who flew in after a seventh place finish in the Phoenix International Raceway NASCAR Xfinity Series race, for the runner up finishing position. – Aaron Creed

Formula 1: Well, F1 may not have lived up to the crash craziness of the weekend, but it still proved to be a bit bizarre. Lewis Hamilton earned the pole for the race, ran off to a good start and encountered no threats as he maintained a decent gap to win the race. For the defending champion, the win shows that neither he nor his team have lost anything. His teammate Nico Rosberg started second and finished second. Finishing third was Sebastian Vettel in his Ferrari debut. The four-time champion started fourth, but was able to pass Felipe Massa on pit strategy and cruise home to the podium finish. Finishing out the top five was Felipe Nasr in his Sauber debut.

The start to the race was a bit peculiar as only 15 of the 20 cars made the grid. Neither Manor Racing driver took to the track the whole weekend. Then in warm-ups, both Kevin Magnussen of McLaren and Daniil Kvyat of Red Bull sustained mechanical failures. The fifth driver to fail to start was Valterri Bottas of Williams who, though he qualified the car, did so after sustaining a back injury in the second practice session. During the race, another four drivers dropped out to bring the total to 11 running at the finish. That seems like a bit of a rough start to the season for the premier series. – Huston Ladner

Unfortunately, Daytona didn’t go all that well. The team had to thrash just to finish the No. 2 chassis. While they did make the start, they were done within two hours. The No. 1 made it into the overnight hours before succumbing to gearbox issues, but wasn’t all that impressive in doing so. Naturally, getting a new car up to speed takes time. Unfortunately, Tequila Patron ESM didn’t exactly have time on their side. In the WEC, development to the chassis is not allowed in-season. Their spec would be set for the entire eight-race season as of last week.

As a result, the team announced on Tuesday that they are reverting back to their proven HPD ARX-03b chassis for this weekend’s Mobil 1 12 Hours of Sebring at Sebring International Raceway and the season opening WEC Six Hours of Silverstone next month. Beyond Silverstone, the team has acquired two Ligier JS P2s that are scheduled to debut at Spa in May while continuing to use HPD power. Unlike the ARX-04b coupe, the Ligier JS P2 is a very competitive chassis that should allow Patron Tequila ESM to be competitive right out of the box in the WEC.

The Ligier JS P2-HPD package (constructed to full P2 rules) is similar in nature to what OAK Racing used late last year here and what Michael Shank Racing will compete with full-time in TUSC, but with more downforce outside of Le Mans. Once Patron Tequila ESM’s Ligier JS P2s come online, they will join three other full-time Ligiers on the WEC’s P2 grid. Patron Tequila ESM’s Ligiers will be the only ones with HPD power (a one-off entry from OAK Racing at Le Mans will also use HPD power).

The ARX-04b coupe is not dead. Patron Tequila ESM, in cooperation with HPD, will continue to develop the ARX-04b coupe with hopes of racing the car again at an undetermined date. – Phil Allaway