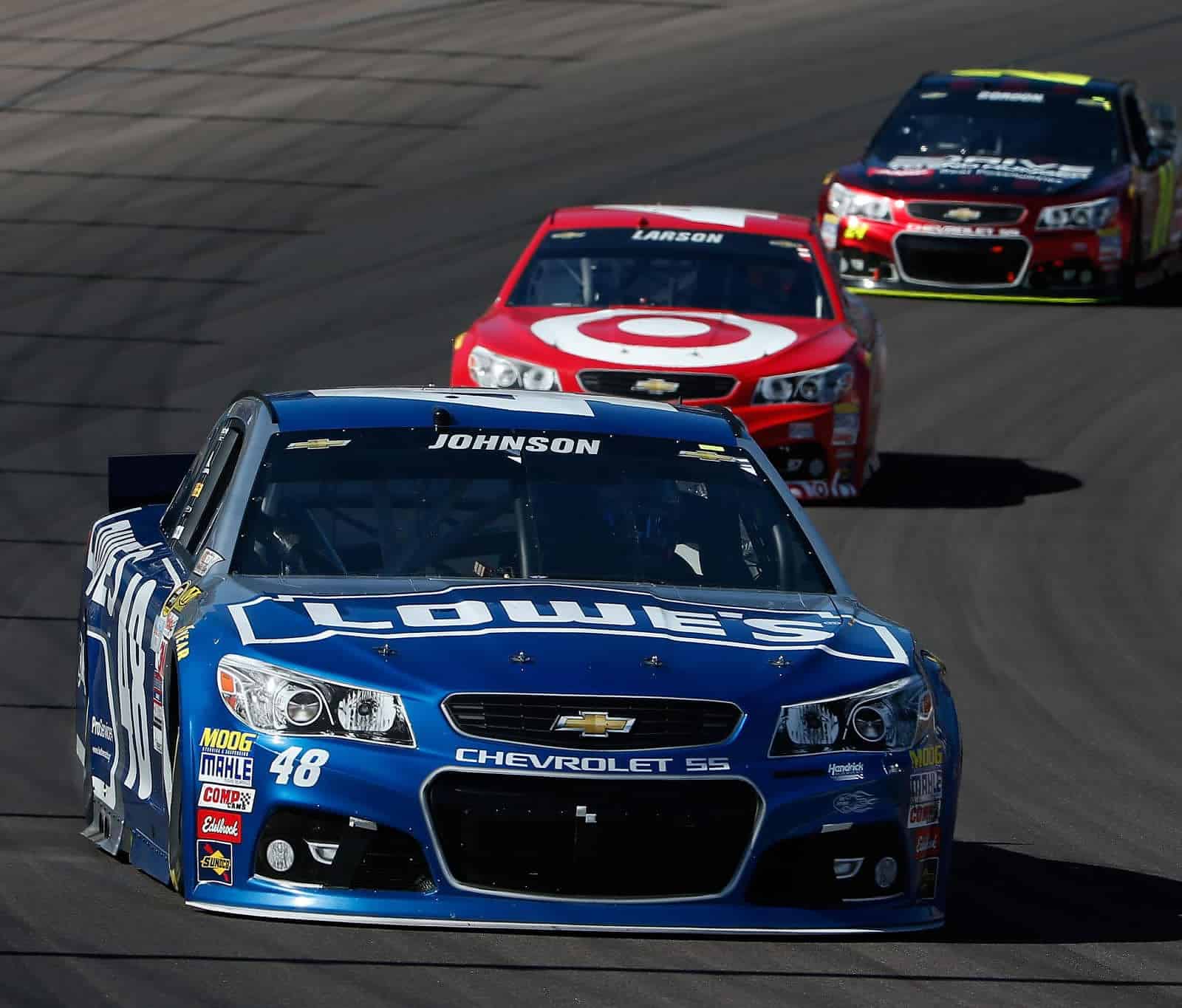 On paper, NASCAR has three manufacturers: Ford, Toyota, and Chevrolet. It’s a three-way distinction designed to increase competition across the board, pushing each company to donate its dollars in the name of winning races and championships. More irons in the fire, so to speak, is supposed to increase competition, produce brand awareness for each make and create a healthy sport to follow each week. Win on Sunday, sell on Monday, right?

Well, sort of. Turns out that slogan, at least to start 2015, works out for only one.

22 Chevrolets started the race at Phoenix Sunday, more than the Ford and Toyota camps combined. They swept the top-five spots, including winner Kevin Harvick, while asserting their dominance atop the Sprint Cup Series. Since Joey Logano’s Daytona 500 victory for Ford, the Bowtie Brigade have won three straight races. This season, it’s won three of four poles and occupy seven of the top-10 spots in the standings. But perhaps the most notable statistic so far is laps led by manufacturer, revealing how little Ford and Toyota have been able to trudge their way to the front:

Chevy sitting on top is nothing new; after all, it’s won every Cup Series manufacturers’ title since 2003. But this level of dominance is unusual. Harvick, along with Hendrick Motorsports, appears to be a large step ahead with the new rules. Next in line is Richard Childress Racing, bringing six cars to the table with both its main team and satellite programs. It’s an eleven-car onslaught that’s difficult to unseat, equal to the entire individual fleets of Ford and Toyota, respectively.

What does this tilt mean for the sport? Clearly, there’s strength in numbers. The Hendrick program is equivalent to 10 cars sharing information: Four-car HMS, the four cars at Stewart-Haas Racing and a two-car engine and information alliance with Chip Ganassi Racing. It’s an incredible amount of teamwork and support, unequaled across the garage. Ford, whose fleet is led by two-car Team Penske, has yet to achieve the same type of network. Ditto for Toyota, whose Joe Gibbs Racing program came under scrutiny this offseason for not working closer with other teams.

How can Ford and Toyota get back in the game? It’s still early, of course, and the new Chase gives plenty of opportunities to unseat top seeds. (Just ask all of HMS). Still, it seems like they’re destined to play second fiddle at this point unless they can get more teams on their sides. Both groups are bogged down by smaller programs (Front Row Motorsports, BK Racing, etc.) that can only bring so much money and information to the table. That creates a pyramid system where all teams exist in a hierarchy. Example: Team Penske’s clearly the top Ford effort right now, then Roush Fenway Racing, then Richard Petty Motorsports, FRM and two single-car programs. Rare is the time one group finishes higher than the other. Toyota, it’s much the same way: JGR, Michael Waltrip Racing and then BKR.

Chevy doesn’t have that problem, with its 10 HMS-supported teams pretty much standing on level ground. It was an SHR driver, Harvick, running Hendrick chassis and engines, who won the championship last year. Jamie McMurray of Ganassi was Harvick’s stiffest challenge Sunday, not a car from the HMS shop. The true teamwork attitude gives each of the ten cars a chance to win instead of creating a Formula 1-style royalty program. Heck, even at RCR we see the same phenomenon; single-car satellite programs have outgunned the three-car “home base” so far this season.

What you get, then, is a stable environment where it’s hard to see new teams and drivers break through. You could see a shakeup, theoretically, if a new manufacturer appears, but there’s no one knocking down NASCAR’s door to compete. Ford and Toyota are destined for second unless they change their bank account – and their teamwork.

Once again, for the 10th time in 12 years this Chase is Chevy’s to lose. But you wonder, the more they inch ahead from the others whether NASCAR begins to lose as a sport.

What is new about this article? Nothing. Nascar a private company has a incestuous relationship with the biggest player in the playground. If this biggest player (Chevy) decided it did not want to play in Brian’s sandbox and they take their toys and go home it won’t be pretty. But nothing will change, it might end up being an all Chevy series in the near future, who could blame the other manufacturers if they took their smaller pool of toys and left. Follow the money, nothing will change. It is a business and it is working out for wonderfully for a few.

It is a business of course, and given that you wonder what incentive there is to spend the amount they do. In days gone by you might argue that it sold cars, or perhaps even trained engineers. Today those arguments don’t seem to be particularly relevant.
While it may be a plus to compete in the series, it certainly doesn’t seem worth say, doubling your investment to equal GM in the number of wins in a year. The wins didn’t prevent GM from bankruptcy, and FCA (Chrysler) seems to be doing quite nicely not participating at all.
So let the games continue.

I tend to agree. The cars on the track bear no resemblance to the cars on the street, any car on any street. Since the COT they have been essentially one model available with one of three different grills. I would imagine that it has been decades since NASCAR wins had any effect at all on new car sales. Given this I’ve wondered for some time now why any manufacturer would invest any money at all in a racing series with steadily declining fan interest, especially in difficult economic times.

not many tube frame V8 Camries sitting on the showroom floor I bet. And how many of those Camry buyers (or Fusion, Chevy whatever) gave a rats butt about nascxar when they bought their car?

Whah Whah to the Ford fans. If the HMS an SHR switched over to the Fiat 500 they would still win races. Biggest reason is the communication and sharing of information, which is clearly lacking with the Ford Stable. Did you read what Sam Hornish jr said about that just last weekend? Imagine how strong Ford could be if RFR and Penske and RPM actually shared real information that was helpful.

Once again I watched very little of the race because the ending was a forgone conclusion. As a long, long time nascar and Ford lover, the quest for the Hendricks, errr, sprint (SHR included) cup championship has made me less inclined to schedule a nascar race as part of my week-end agenda. It used to be must see event, Ford and Toyota might as well not exist.

Nothing new here. If you race in Nascar you better be in a Chevy. Preferably a Hendrick Chevy.

Frankly I’m surprised that Toyota is still in it with what Nascar has done to them in the past.

The Ford camp always steps on their own feet. And let drivers get away from them.

You never know. Recall that Penske went from GM to Dodge to Ford. Likewise Gibbs went from GM to Toyota to the horror of Tony Stewart whio jumped ship. Back in the day flags were flying at half staff when Richard Petty and team went from Mopar to Ford (and later from Mopar to Pontiac, Buick, Chevy, and I forget which others. Yeah, there was an Olds in there somewhere. Junior John credited with bringing Chevy back to the table eventually ran Fords. It’s a bidness. Whoever is willing to write the big checks gets the teams. It’s also a matter of pride. GIbbs figured out as long as Hendrick and Childresss were in the game he was going to be third tier with GM but he could be the big fish in a small pond with Toyota.

NASCAR better get ready to survive without the manufacturers just as they did in 71. There is no more correlation between what shows up at NASCAR tracks and what’s on a dealers lot. Toyota Camrys and Ford Fusions are front wheel drives. Chevy killed the SS so I have no idea what they’re racing (possibly the 2016 Camaro?) The game is no longer about performance, it’s about mileage and emmisons to whit electric cars that one day will drive themselves. Fords new raptor gves up it’s hairy chested V8 and gets a 6 banger albeit with ecoboost. The new GT 400,000 buck supercar also gets a V6 (i think I feel a little vomit in the back of my throat. 400 thou and you want me to drive a 6? I’ve canceled my order.

Oddly enough Dodge dumped NASCAR and is now selling a 700 horse Challenger and Charger (and maybe a 300 soon?) They can’t keep up with demand and have had to stop taking orders. Go figure. Yes, there are still some of us who are more concerned with 1/4 mile ETs and smoky burnouts than mileage and cup holders.

Win on Sunday, sell on Monday? Today it’s win on You Tube sell all week long. That new Tesla that gives a Hellcat a run for it’s money has us petrol heads all aghast. You’ve seen the video where the Tesla beats a Hellcat. A week later the Dodge dude came back with a few mods and better tires and spanked the Tesla. It’s on boys, it’s on.

PS- I’ll be a You Tube star soon in my new Fisker- Galpin 727 Horse Mustang. There’s been some delay in delivering it, something about a check fior 125,000 that bounced. Tom can you check to see why this week’s expense account check hasn’t been issued?

I agree with Matt. I still can’t figure out how the manufacturers think it’s worth dumping all the money they do into the sport. Wouldn’t they be better off just being the primary sponsor on a couple of kit cars.