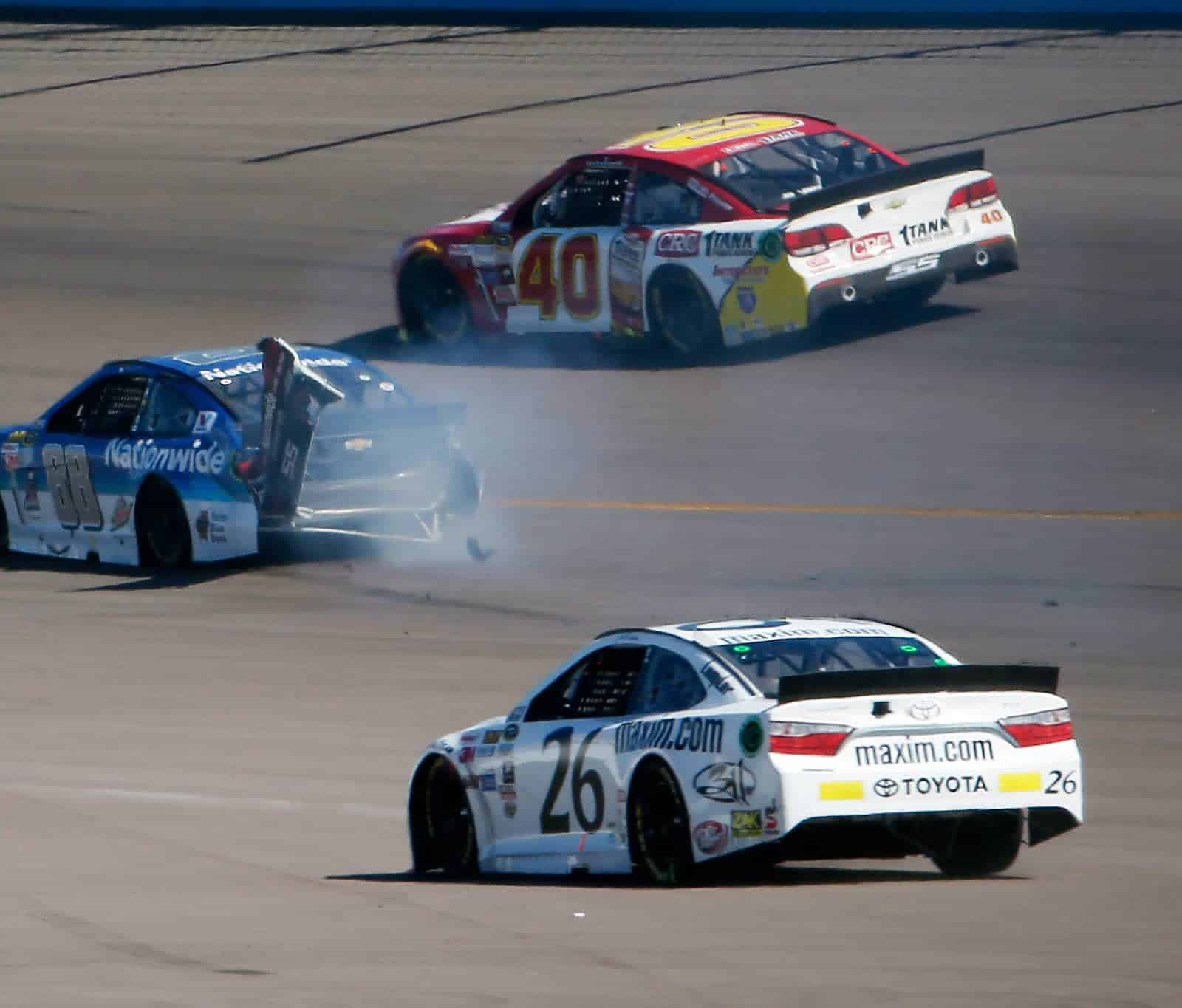 Burnouts, yes, Kevin Harvick knows all about burnouts lately. He’s had plenty of practice, winning the last two races, and looking back to last year, he’s won four of the last six. If you go back a little more, he’s been first or second in each of the last seven races and he’s led an astounding 802 laps. Harvick commented about how it’s great to be a part of the Stewart-Haas Racing team and how everyone in the shop is happy after Sunday’s win. Well, when you are on a run like this, it’s hard for the entire team not to be happy (downright impossible, I would think). The big question will be if the No. 4 team can keep it going. There’s really no reason to think otherwise right now. It’s almost like you have to think Harvick is going to win each week until proven otherwise.

Kurt Busch went from purgatory right to back to where he wanted to be within a matter of hours last week. He was off the charts, almost forgotten about while his alleged domestic abuse case was being investigated in Delaware. Then, almost at the snap of a finger, Busch was cleared of those allegations and it was off to the races for him. He responded by showing his obvious talent of driving a racecar by running as high as second on Sunday, before pitting late and settling for a fifth-place finish. There’s never been any doubt about his ability to make a racecar go fast. Maybe the best sign of all for Busch came on the side of the car where drivers put their names. In the past, he has had “The Outlaw” signature up there. Now, it’s just “Kurt Busch,” and maybe he’s finally realizing that that will do just fine.

Lastly, here, there’s a different kind of hot. And this is boiler-oven hot stuff too. It had nothing to do with a driver’s finish in a race, but everything to do with Dale Earnhardt Jr.‘s right-rear tire that sounded like a grenade when it blew during the race. Then, since the bead was melted, it caused a fire in the entire right rear tire/axle area. When the car got back to the pits, Junior hopped out and the fire crew, after a few minutes, thought it was extinguished. But then when the No. 88 was being towed back to the garage, you could still see some flames under it. So, yes, for a bit there, Junior was en fuego, just not in the way he wanted to be.

And then there were three. Along with Harvick, there are now just two other drivers who have finished in the top 10 in each of the first four races. One of those drivers is Joey Logano, and coming off the season he had last year, that’s not really a surprise. This year’s Daytona 500 champion is capable of winning anywhere. And while he wasn’t great on Sunday at Phoenix, he did manage an eighth-place finish… and there’s nothing really wrong with that.

The surprise of this bunch, though, is without question Martin Truex Jr. He finished seventh Sunday, and the fact he was able to do that was a credit to his one-car team. Truex ran from anywhere in the top five at times, to back in the low 20s at one point. But he made a final charge in the end and gave the Furniture Row Racing team another good day at the track. If this team keeps fighting, it will run itself into a win one of these Sundays.

Let’s talk manufacturers and teams here. First, you have to wonder if Joe Gibbs Racing is second-guessing its decision to allowing Toyota Racing Development to prepare all of its engines now. Gibbs made that choice a couple of seasons ago, and while Matt Kenseth made it look good in 2013 with seven wins, Toyota has now gone winless in 36 consecutive Sprint Cup points races. This weekend’s race at Fontana will mark the one year anniversary of the last Toyota win. Maybe the bigger, faster track will help, because the manufacturer was nowhere to be found up front on the 1-mile oval at Phoenix, where the best Toyota finish was a 13th by Carl Edwards.

Next, take a look at Roush Fenway Racing. They do have Fords, and while Team Penske drivers Logano and Brad Keselowski are at least competitive and consistently in the top 10, the RFR drivers have combined for a whopping total one top-10 finish this season. That was a 10th by Greg Biffle at Daytona. Basically, the Roush Fenway drivers are nowhere to be found when it comes to not only competing for the lead, but even for a top-five finish. There’s an argument that this team should be on the cold list, but Ricky Stenhouse Jr.’s 12th-place finish at Phoenix keeps them from being completely frozen.

Yes, here he is in his usual place. Tony Stewart did have a respectable run going Sunday and was battling for a top 10 late in the race when he collided with Justin Allgaier and put himself into the wall. It looked like Stewart went into the corner a bit hard and slid up a little. Allgaier came down just a little, and that combination often means at least one driver isn’t going to be happy with the immediate result. So, instead of a top 10, Stewart turned in his fourth straight 30-something or worse finish of the season in 39th. At least the No. 14 team was headed in the right direction in this one, but it’s still a far cry from what Stewart and his fans expected for this season.

If Ricky Stenhouse Jr. was winning races like Harvick, then maybe the mullet would be cool. But he’s not and it’s not. Sure, Stenhouse was raised in the dirty south where his mother taught him to be a Kountry Gentleman, as the Family Force 5 song goes, but he’s done no business in the front of the pack this year, leaving him no reason to party when he’s in the back.