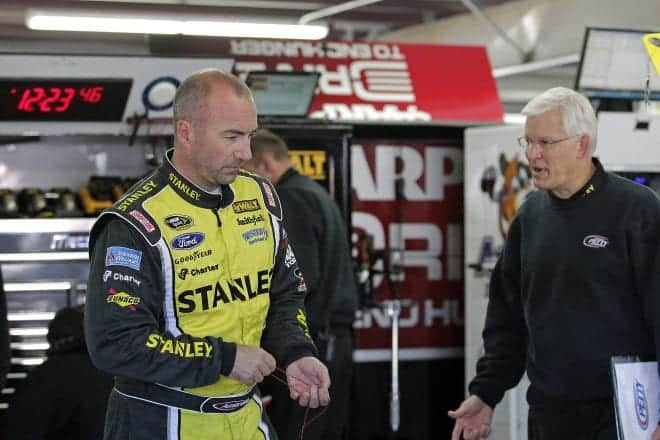 Very early on Tuesday morning, V8 Supercars team DJR Team Penske announced that former Sprint Cup Series regular Marcos Ambrose will be temporarily stepping away from the seat of the No. 17 Ford Falcon FG X, effective immediately.  Ambrose will be replaced for the time being by 25-year old Scott Pye, who drove for the team last year.

Ambrose is matter of fact about why he’s making this move right now.

“Although this is a decision which has been hard to make, it has become clear to me over the first two events of the season that I need more experience in these cars to do what is required of the lead driver and to be competitive for the team and our partners,” Ambrose said in a press release. “Scott [Pye] is a great driver, has already worked with the team and has more experience in these cars, which will give the team the best chance to be successful right now. This decision to step aside from the lead driver role at DJR Team Penske is completely my decision. Although this decision may disappoint fans of whom I apologize to, I will continue be a great teammate and will be at the track to support the team in Tasmania. I look forward to getting back on the track later this season and will be ready to do my best for DJR Team Penske.”

While Pye will drive the No. 17 Shell Helix/XBOX 360/Wurth-sponsored Ford for the foreseeable future, Ambrose will be a common presence at races, helping to support the effort. Ambrose will also maintain a testing regimen that will better acquaint the former V8 Supercars champion with the New Generation V8 Supercar, which is in its third year of use. However, the team’s release states that Ambrose will return to the car sometime later this year. That return will likely be in addition to racing in the endurance events starting with the Wilson Security Sandown 500 in September.

Before Tuesday’s announcement, Ambrose’s best finish in the No. 17 was a 12th in Race No. 3 of the season opening Clipsal 500 in Adelaide.  Last weekend, Ambrose finished out of the top 20 in three of the four 12-lap sprints that comprised the non-points MSS Security V8 Supercars Challenge, held as part of the Australian Grand Prix weekend at Albert Park in Melbourne.

That raises the question, was the reason Ambrose was so successful in Australia before that his Holden(GM) team was so good?
Or, did Ambrose lose a little something competing in Nascar?
Obviously both he and his team have quickly realized he’s not competitive in V8 Supercars anymore.

A lot of superstars have been made simply because a team was that good. I believe Ambrose is better than that. You can bet none of America’s big-time folks, all our favorites included, would ever bench themselves willingly in a similar scenario.

@russ: What? Ambrose never drove for Holden. He was with Ford always. It’s just that he’s been away for a decade during which the cars have changed a lot obviously and he’s old too so that makes it even tougher to adapt. I figure he’ll only run the endurance races with Scott Pye, who will now probably be the full-time driver of that car.

Thanks for the correction, he was actually in a Ford Falcon his entire career, first with Stone Brothers and then another team.
Regardless, the point is the same, was the success as a result of the team or the driver?

The “is it the car or the driver” is motorsport’s greatest intangible, russ. Even a good driver and a good team can struggle if they don’t gel well and extract maximum from each other.

Agreed. Guess its like the chicken or the egg. The driver cant make it go any faster than the car is physically capable of, but without a driver that can take it and keep it as close to the limit as possible, it doesnt matter.

I really miss Ambrose. I found him a refreshing change from both the bland pre programmed clone drivers, and petulant tantrum throwing geldings that populate NASCAR these days.