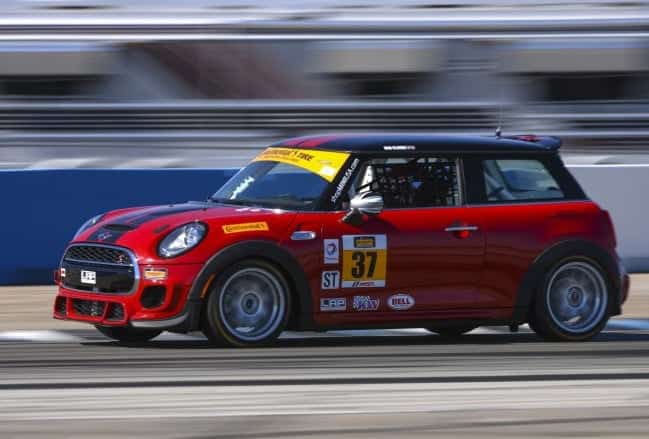 Back in January, MINI USA announced at the North American International Auto Show in Detroit that they planned to return to the IMSA Continental Tire SportsCar Challenge (CTSC) in 2015. Unlike the last time that MINIs were run in the series, MINI itself is stepping up as a sponsor and substantial supporter of LAP Motorsports, the Indianapolis-based organization that will be fielding two MINI John Cooper Works Hardtops in the CTSC’s Street Tuner class. The cars, keeping in line with IMSA’s rules for the Street Tuner class, will be fairly close to stock trim. Power will be provided by a modified version of the TwinPower Turbo engine in the street version of the MINI John Cooper Works Hardtop. According to MINI USA’s website, the TwinPower Turbo engine will produce 228 horsepower and 236 lb-ft of torque in street trim.

On Wednesday, MINI USA and LAP Motorsports announced their two driving lineups for the 2015 season, which begins one race late at Sebring International Raceway this weekend. No. 37 will be shared by Remo Ruscitti and Dan Clarke, while No. 52 will be shared by Lukas Johnson and Stephen Simpson.

LAP Motorsports LLC owner Luis Perocarpi, who previously worked with Clarke at CTE-HVM Racing, is very confident about his lineup of drivers.

“All four drivers have a proven history of winning championships at various levels and have experience in either the Tudor United or Continental Tire SportsCar Challenge racing series,” Perocarpi stated in a press release. “By combining MINI’s famous go-kart handling with a BMW Group developed turbocharged power plant and these talented drivers, we will have cars on track competing for the win.”

MINI USA is very excited about returning to the Continental Tire SportsCar Challenge and keeping the brand’s racing heritage alive.

“We are looking forward to having Luis and the team at LAP Motorsports join the MINI Motorsports family and know that they will continue to build on the rich racing heritage that started back in the 1960s,” said Chris Potgieter, Product Manager for MINI USA. “When you combine the power and performance of the new MINI John Cooper Works Hardtop, the most powerful car that we’ve ever built, with the proven track record of the LAP Motorsports team, it is sure to be an exciting year for all the MINI fans everywhere.”

Ruscitti is a veteran of the Street Tuner class, having driven last season for Autometrics Motorsports in a Porsche (the team started 2014 with a Boxster, but switched to a Cayman). Ruscitti (sharing with Adam Isman) scored a victory at Canadian Tire Motorsports Park and finished second at Virginia International Raceway. Clarke is best remembered by American race fans as a competitor in the Champ Car World Series for CTE-HVM Racing and Minardi Team USA. Clarke earned a pole at Road America in 2006 and earned a career best finish of second at Road America in 2007. More recently, Clarke finished 12th in Grand Sport in a one-off appearance at Indianapolis Motor Speedway last season and competed in one Xfinity Series race for Jimmy Means at Watkins Glen in 2011.

Simpson has most recently driven for JDC/Miller MotorSports in the TUDOR United SportsCar Championship. As lead driver for the team, Simpson earned two third-place finishes in class. The most recent of the third-place finishes was at Rolex 24 at Daytona in January. Previous to his TUSC experience, Simpson competed in ALMS and A1 Grand Prix. Finally, Johnson is an up-and-coming racer who made a couple of starts in the CTSC (one each in GS and ST) last season after gaining years of experience in karts.

Prior to this weekend, the last time that a MINI competed in the CTSC was in 2012. RSR Motorsports once fielded as many as four Mini Cooper Ss in the series on a full-time basis. Former Sprint Cup Series driver Ken Schrader competed in one at Road America in 2011, finishing 10th in class. However, the team gradually replaced their MINIs with Honda Civic Si Coupes once the MINI’s could not be developed any further.

The MINI Cooper Works Hardtop’s race debut will be in Friday’s Microsoft Visual Studio 150, which will start at 1 p.m. The race will be streamed live at IMSA.com and FansChoice.tv. Highlighted TV coverage of the event will air on Apr. 5 on FOX Sports 1 at 9 a.m.