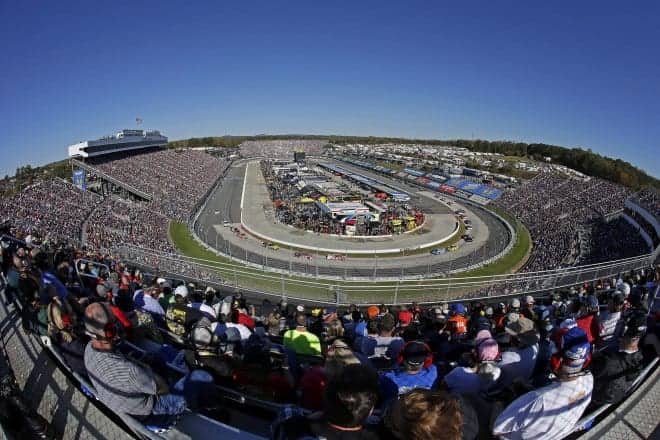 Well, Phoenix was fun… or something. Before the weekend started, Happiness Is wondered if Kevin Harvick would just sweep everything, leaving the only question as to whether his car and crew would hold up. As far as Sprint Cup goes, he did just that and with little in the way of drama, though NASCAR tried by throwing debris cautions as it saw fit. (Seriously, a water bottle?!) No surprise then that the viewership numbers were down, something discussed by Tom Bowles yesterday. How many people, though, want to watch a race when it is merely a foregone conclusion? It’s not like a game between the New England Patriots and the Jacksonville Jaguars is going to draw a significant audience.

The only thing that was perhaps a little bit surprising was that Harvick didn’t take the NXS race as well. In a strange bit of circumstance, Joey Logano stole that one, doing so in much the same fashion that Harvick did during the Cup race. Logano, running for Team Penske, crushed the field like every superhero film destroys New York. But that win didn’t seem to worry Harvick, who seems to be sporting one of the best crew chiefs, Rodney Childers, in the business right now.

First, Paul Wolfe stole Chad Knaus’s mojo and now it’s Childers. Whatever will Knaus do? Oh, right, he already got his driver a win; they can play test session in the various sandboxes over the course of the next 22 races.

What the Saturday-Sunday pairing provided is further evidence that Harvick & Co. are rolling. However, Logano has emerged as the driver closest to him. He may have scored only an eighth-place finish at Phoenix, but is second in points (not that it matters) and just 22 back of the top spot. Take that as a way of recognizing Harvick may be on a brilliant and historical tear, but Logano has been able to keep some kind of pace.

The season is just four races old, so these two may be riding their high from last year’s success. But right now, the stats make it clear: it’s these two and everyone else. That is, until Knaus unleashes his latest craftiness….

Happiness Is… Hot Dogs. It’s either a slow week or the news coming out of Martinsville, Virginia is something that changes the course of history. Martinsville Speedway announced that it will be switching from Jesse Jones Southern Style Hot Dogs to those from Valleydale, ending one of the biggest traditions within the sport. It’s not everyday that a menu switch draws such interest, but the hot dogs at Martinsville have taken on an iconic place in the NASCAR world. The move is one that certainly brings on consternation, even if many fans won’t care once they’re at the track.

There is some peculiarity to the move, especially as the race is just one week away. To begin with, the switch is one that goes from a small Southern company and moves to a larger one, as Valleydale is owned by Smithfield Foods. Now, Smithfield is headquartered in Virginia, so the change isn’t a total thumb to local roots, but Smithfield is also a subsidiary of the Shuanghui Group in China.

Taken altogether, it looks like International Speedway Corporation is making the move toward big company money. Every organization has a right to maximize its profits, but for a sport that many feel is continually moving away from its roots, the hot dog change seems like the overt representation for just such an issue. Yes, the Valleydale dogs are supposed to look and taste just like their predecessors… but the racing was supposed to be better this year…

Happiness Is… Pyrrhic Victory. Seeing as how the Formula 1 race in Australia can be classified as a solid dud – with 15 cars starting and 11 making the finish during Lewis Hamilton’s Harvick-like performance – the most interesting story has been the fight between Sauber Racing and Geido van der Garde. The driver sued, and won, against Sauber to get a seat for this year but when the race began, Sauber still had two other drivers in their cars, a move that placed them in contempt of court.

A pyrrhic victory is one where the cost of winning is equivalent to defeat. It’s little surprise then that the two decided to part ways this week. The fun part is that even though van der Garde apparently was paid off handsomely, the two are still taking jabs at one another. To call their spat childish is accurate, but what makes it idiotic is that Sauber is a team that’s struggling for funding and consistency, while van der Garde is now a driver who will likely not find another ride in F1. The fact that both parties can emerge as winners and losers illustrates that perhaps the battle wasn’t worth fighting.

Happiness Is… Keloorah. It’s about time. Happiness Is has been waiting for ages for Keloorah. Finally, relief. Keloorah is not some unknown holiday where some benevolent being doles out millions of dollars in a joyous fashion. Instead, Keloorah is Michigan International Speedway’s new initiative that will match its race weekends with music festivals. The creation of these festivals is an attempt to draw in, as noted in its release, the millennials. Aside from developing rules that actually bring about passing, Keloorah may be a smart way to go.

If one of the reasons that NASCAR refuses to move races to weeknights is the assertion that tracks are a destination spot, not an event, then a music festival brings a new element to hanging around the track for a number of days. Keloorah may be just another shot that misses the mark, but maybe it will be just what some of these tracks need to help maintain interest. The only problem thus far is that MIS has not released the lineup for either Keloorah. If you’re going to get buzz going, that’s a big part of the process.

Inventing a music festival to bring in people may put a real crunch on things around there. It is the home opener for the University of Michigan football, and there is a large horse show being held not 40 miles from the track. Good luck finding a hotel room!

Bringing in a side event may finally be an acknowledgement of ever dwindling fan support. While it might stuff the parking lot with kids I would bet that, if anything it further discourages actual race attendance.

I doubt if race attendance is the focus. Rather its making money, as much money as possible.

I certainly do not begrudge them an opportunity to make money. Rather, I saw it as a sign. When the local pet shop clears floor space for a line of clearly not pet related products you can bet that the business is not healthy. Sort of like attaching a music festival to an auto race that is not expected to draw.