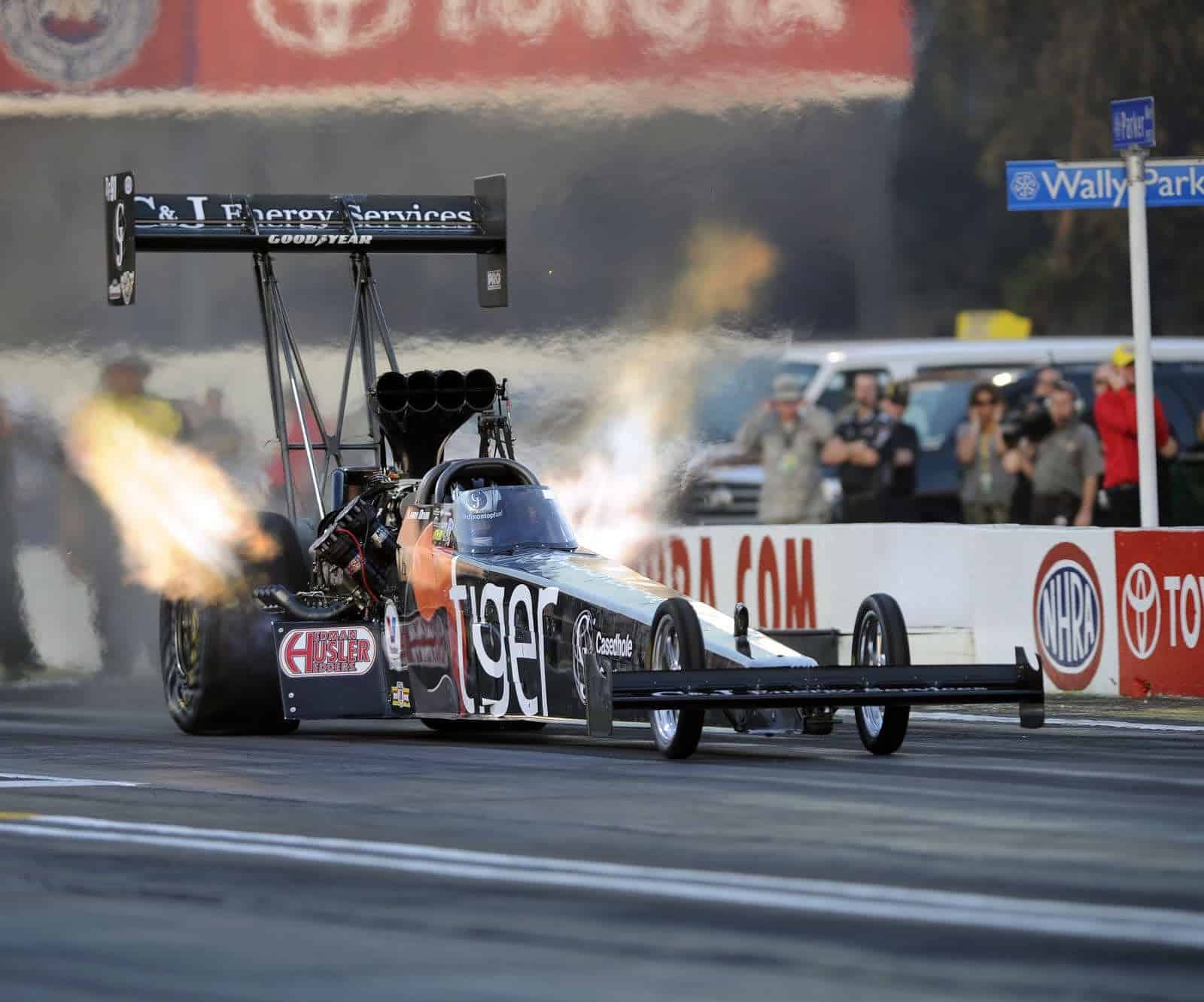 Drag racer Tina Pierce wrecked Saturday night at an IHRA event. Almost immediately, video circulated on the internet and social media, prompting unfortunate comments from some male readers. Granted, they were not in the majority, but they were disturbing, saying things like “this is why women shouldn’t race” and that she could not drive. Pierce, of course apparently suffered a parts failure and the result had nothing to do with her gender. Yet some cracked jokes about how women are clueless about cars or belong in the kitchen. It would be nice to say that last bit was an exaggeration, but it’s not.

Last year, Angelle Sampey talked to Frontstretch about her early years in the sport and the resistance she faced.

“It kind of made me hard so I wasn’t the real Angelle. When I came to the races, I had a wall up around me constantly and I had to because it was tough,” she said. “And then outside of the competitors, there were also fans that way. There were fans that just hated me, whatever reason they could find, they hated me and still to this day they do. They don’t even know me! Especially a fan, someone who has never spoken to me, is on the internet bashing me, so that kind of stuff made me become pretty nasty. I was out here and I wouldn’t talk to people and I was not nice. I know I wasn’t.”

Some women do indeed develop that mean streak, that thick skin and it doesn’t necessarily help with their perception either because then they are just looked at as a bitch. Some just hang it up and quit, even if they have talent, because they don’t want to deal with it. That’s a shame.

In NHRA, at the top levels at least, it seems like a corner has been turned. The Force girls, Alexis DeJoria and Erica Enders-Stevens shared experiences very different from Sampey’s. Their male competitors express great respect for them and a number of those competitors have daughters who have started in Junior dragsters. John Force, as old school as you can get, already brought up one generation of racing girls and is starting on a third, putting a granddaughter in a Junior dragster as well.

“There are women in our stands,” said Force. “They’ve got to have somebody to cheer for, so why wouldn’t you want drivers?”

Here’s hoping the rest of the world grows up and sees it that way soon, too.

Driver of the Week: Larry Dixon

Some Things Most People Don’t Know About Larry: Actually, this one might be something pretty much everyone knows about Larry, namely the terrifying wreck he had at the Gatornationals last week. It made all the highlight reels as Dixon’s car buckled and split in two, with both halves getting airborne. Dixon flew through the air before what was left of his car made contact with the outside wall and came to rest. A testament to the safety equipment in place in NHRA cars, Dixon walked away without injury.

“It goes up so fast. When you don’t have that front wing holding you down, you can’t stop it. You get off the gas and you hit the chute and the guys were joking because in the still photos of it, I’m pulling on the brake and doing all the things that you do while you’re awake but it just happened so fast and when I was up in the air and traveling for so long, you’re waiting to hit. All my equipment worked for me.

“When I went through my last one and my head hit the roll cage and it split my helmet, tried to pop my eye out of the socket, at that race, I ordered a HANS device. I got it the week we lost Dale Earnhardt at Daytona. Why would I ever take it off? I’ve been wearing one since 2001.”

In case you somehow missed it, here is video of Dixon’s accident.

If you are new to drag racing, the first question you might have while watching an NHRA broadcast is “What do they mean by a holeshot?” It’s something you are bound to see a few times during a typical series of elimination matchups. For starters, the winner in Mello Yello Series eliminations is the driver who crosses the finish line first. So one would assume that would always also be the driver who puts up the lowest elapsed time (E.T.) and faster speed, right? Well, no. There are two things that make up the run. One of those is the elapsed time, which is tracked from the moment the car rolls across the starting line beam to when it crosses the finish line. But there is also the reaction time, which is the time it takes the driver to react to the green light on the Christmas Tree and roll through that starting line beam. For the pros, this reaction time is measured in fractions of seconds. But if you get a good enough jump on an opponent off the starting line, you might still beat him to the finish line, even if he does post a better E.T. That’s called a hole-shot win.

Greg Anderson scored a milestone victory at the Gatornationals last weekend, his 75th, and also broke a 64-race winless streak that dated back to Englishtown in 2012. Anderson is now fifth on the all-time NHRA wins list and third on the Pro Stock wins list, trailing all-time winningest Pro Stock driver Warren Johnson by 22.

The NHRA Mello Yello Drag Racing Series takes a week off and then heads to the most unique event of the season, the 4-Wide Nationals from zMAX Dragway outside Charlotte, N.C. This is also the first of five live race broadcasts scheduled for this season.