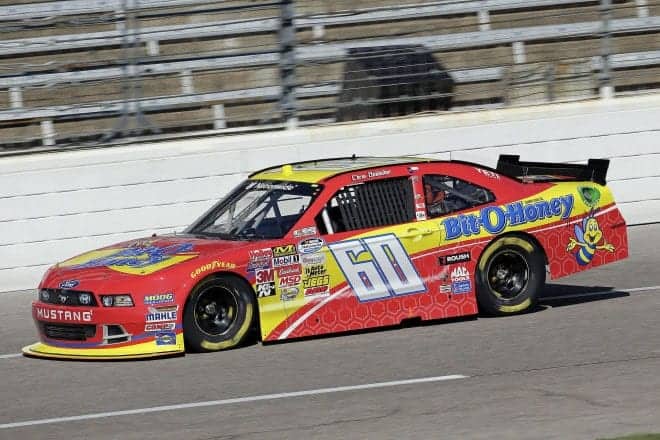 For the first time in his young career, Chris Buescher will be performing double duty.

With Brian Vickers sitting out this weekend (and likely more), Brett Moffitt has been named driver of the No. 55 car for Michael Waltrip Racing, which has left an opening at Front Row Motorsports – an opening Buescher will fill.

Buescher, 22, has been given the nod to drive the No. 34 Ford, which was originally slated to have David Ragan in the car throughout the season. However, since a full schedule was not guaranteed, Ragan is driving the No. 18 car for Joe Gibbs Racing on an interim basis with Kyle Busch out due to multiple leg injuries.

“I was actually getting breakfast over by the hotel and Robbie Reiser called me,” Buescher told Ford Performance on Friday morning. “It’s kind of similar to the way my first Xfinity race went down. I was getting ready for an ARCA race and got the call and was rushed to Richmond, so it’s been wild. I’m happy to help out Front Row and help out another Ford team. We’re trying to all work the best we can to make this happen as smoothly as possible. It’s gonna be a wild weekend between the two schedules. I’m excited to get the opportunity, so I appreciate that very much, but we’re gonna have to be on our toes this weekend.

“The biggest issue we’re gonna have is just getting the seat right.  I run an aluminum seat on the Xfinity side and we have a carbon seat to work with here. We’re just trying to adapt this insert to me, so we’ve got to work on it just a little bit and move everything around – the steering and pedals and all that – but these guys have already jumped right in and are working hard at it. I know it’s not only hectic for me, but for everybody involved in this process right now.”

.@Chris_Buescher will make his first Sprint Cup start for Front Row Motorsports in the No 34 this weekend. pic.twitter.com/l5iQXQsa4K

Buescher races full-time in the NASCAR Xfinity Series for Roush Fenway Racing, who has a minor alliance with Front Row Motorsports. Winning the 2012 ARCA Series title with Roulo Brothers Racing, Buescher has been put in a similar situation in the past.

“I learned that the hard way when I got the call from Robbie in 2011 when I was subbing in for Trevor [Bayne],” he said. “My phone was dead that morning and he called and called and called and it was a little while before I could actually get the phone charged and get back to him and it was pure panic then. At least with this one I answered the first time.”

Though he will be making his Cup Series debut, this will not be his first time in a Cup car. Buescher has tested on multiple occasions for RFR.

In 45 Xfinity Series starts, he has seven top fives and 18 top 10s, along with one victory at Mid-Ohio in 2014. Entering the race at Fontana, he sits second in the standings, behind Ty Dillon by 14 points.

The No. 34 car sits 33rd in owner points entering the Auto Club 400. Ragan, Moffitt and Joe Nemechek have driven the car.