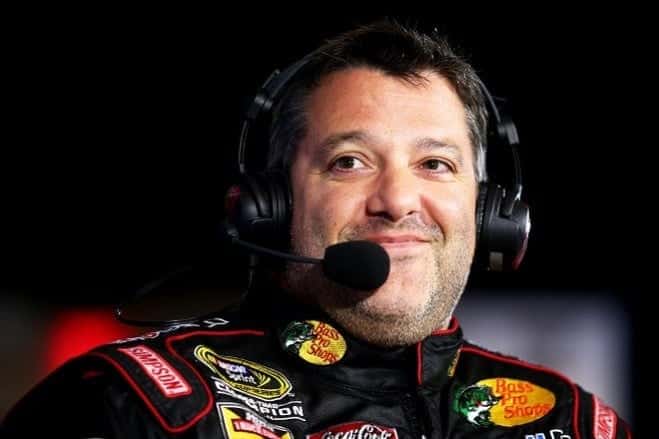 It’s Kevin Harvick’s world, and we’re all just living in it. That was pretty much the sentiment that NASCAR followers came away with after witnessing Harvick thoroughly whip the field for a second straight week in Phoenix last Sunday. Harvick has been the dominant force thus far on NASCAR new-look West Coast Swing and enters the final leg of the three-race series with full momentum and a home crowd to look forward to in Fontana, Calif.

Meanwhile, as Harvick dominates, the rest of the Sprint Cup garage is scrambling to play catch up.

Could Harvick do the unthinkable and make it three in a row at Fontana? That’s just one of the many questions you should be asking as the Sprint Cup Series embarks on what has become one of the most exciting venues on the series circuit, Auto Club Speedway.

1. Will Harvick win three in a row?

Harvick enters the weekend on the best run of his entire career, having finished in the top two in every NASCAR Sprint Cup Series race dating back to last November’s race at Texas. In that time frame, he’s won four races. Wild stuff.

My prediction, however, is that the streak will end on Sunday. Auto Club has been a restrictor-plate track in disguise for the past four years, with ultra competitive, pass-heavy racing that presents a difficult challenge for the drivers. Auto Club is a difficult track to dominate at since so many variables are at play during races at the facility. Tire wear, multiple passing grooves and drafting all play a role here.

Many different drivers will see the top five throughout the day if historical trends hold up. Harvick will thus have a steep hill to climb on Sunday in his attempt to win at one of the highest-variance tracks on the circuit.

2. Will Auto Club live up to the standard set by the past four races at the track?

ACS has quite possibly been the greatest comeback story in NASCAR’s recent history. The track was known for many years as the worst on the circuit, and the track’s attendance showed it. NASCAR robbed the track of one of its races, shortened its one remaining race to 400 miles and essentially gave track management a warning that they needed to step it up or else risking losing a spot in NASCAR altogether.

Lo and behold, just one year after the track lost its second date in 2010, the track suddenly began putting on exciting races. The 2011 show was a memorable dogfight in which Harvick snookered Johnson on the last lap after waging a scintillating duel for 10 laps. The 2013 race was arguably the finest intermediate-track race in the Chase era, culminating in an instant classic finish that saw Kyle Busch pass a wrecking Denny Hamlin and Joey Logano in the final turn of the final lap of the race. Fans began turning up in droves to see the track’s newfound action, and last year, the track sold out its first race in years.

What’s the secret to Auto Club’s recent success? It’s simple: old pavement and an aero package that fits the racetrack. The drafty, grippy nature of the Gen-6 car meshes perfectly with the long straightaways and wide turns of Auto Club. On top of that, the tracks’s old and abrasive pavement promotes multi-groove racing and lots of tire falloff. Add it all up, and you have a near perfect racetrack.

Given that the track’s surface is a year older and the aero package will likely race similarly to last year, we should be in for a dramatic and competitive affair on Sunday.

3. Can Tony Stewart get his season back on track?

Stewart is currently 36th in points right now. He is sitting behind names such as Cole Whitt and Alex Bowman. Stewart has never gotten off to such a poor start to a season in his entire career. But given how poorly Stewart has performed over the past two years (yes, I know much of his lack of performance is due to extenuating circumstances), his slow 2015 start hasn’t exactly been unexpected.

That being said, ACS would appear to be the perfect track for Stewart to deliver a good run at. Auto Club is the only track with the exception of Dover where Stewart that Stewart has consistently run well at during the Gen-6 era. Stewart had a chance to win each of the past two races at the track and won the final COT race at the track in 2012.

A win probably isn’t within reach just yet, but a solid top-five run on Sunday would go a long, long way in helping Stewart’s season get off of life support.

4. Will the JGR cars be a threat at their best Gen 6 era track?

In 2014, ACS was the only non-restrictor plate track that Joe Gibbs Racing was able to deliver a win at. That win came courtesy of Busch, who will not be racing this weekend.

This statistic stands as a rather sobering one for a team that is supposed to be one of the best in the business. And thus far in 2015, it’s been pretty unimpressive once again aside from a Herculean effort in the Sprint Unlimited that sent Matt Kenseth to Victory Lane.

Team driver Hamlin has gone on record as saying that JGR cars are “crap” at the current moment. But Auto Club is mostly a driver’s track, and one thing that JGR does not lack right now is talented drivers.

It will thus be interesting to see where the JGR cars stack up on Sunday at a racetrack that is unequivocally the team’s best. Perhaps the drivers will be able to overcome whatever is ailing their racecars mechanically. But if JGR is once again far off the pace? That could be a sign that a long season is in store for Coach Gibbs’s stable.