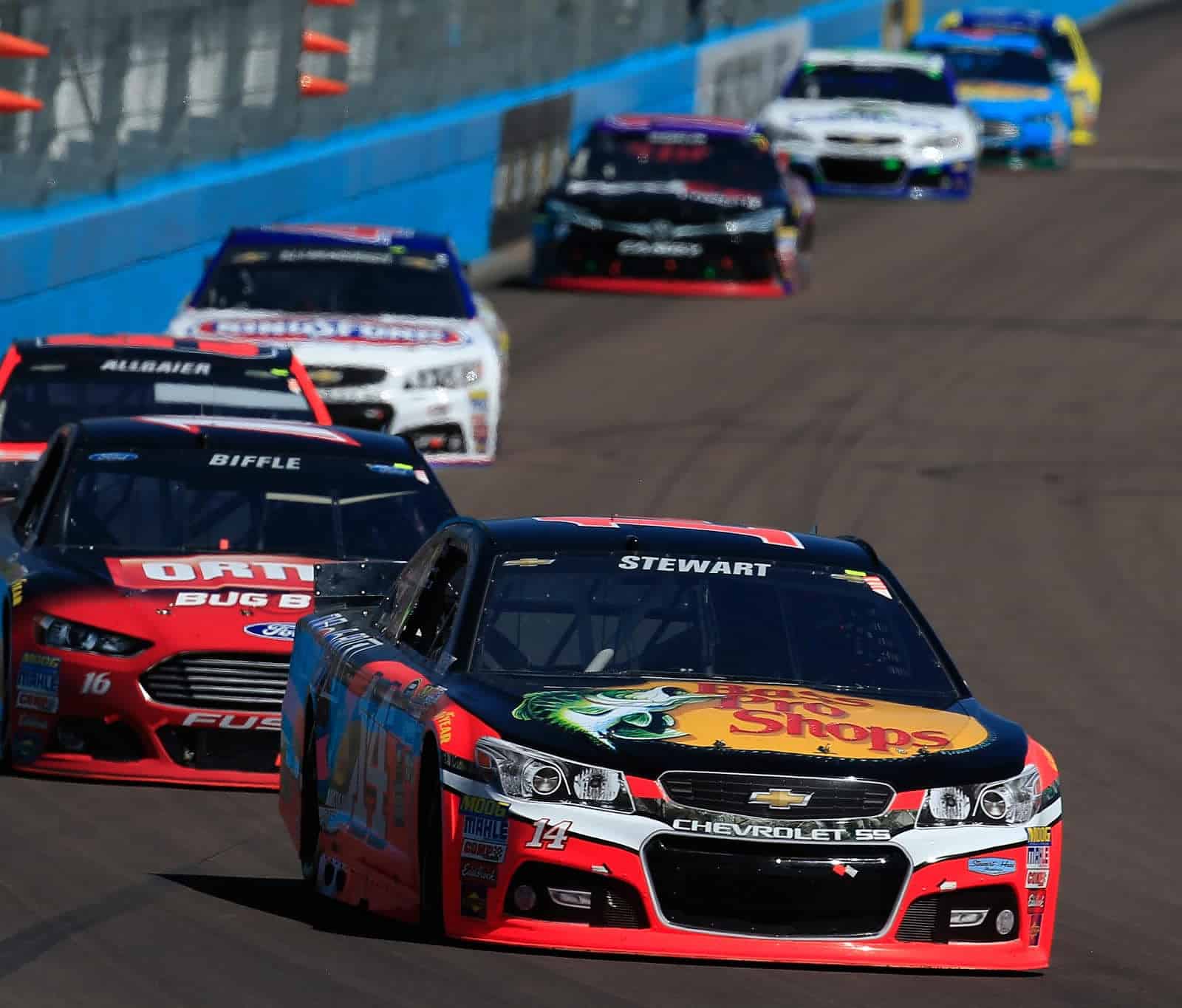 The Game 7 moment. That one perfect, shining, elusive minute of perfection. It’s got excitement, it’s got hope, it’s got everyone on the edge of their seats. It’s what NASCAR has tried to create with the Chase, the restart rules, the green-white-checkered finishes, the well-timed debris cautions. But it’s hard to capture and impossible to create.

And it happens every single race.

You heard that right. Every. Single. Race. Because the perfect shining moment isn’t when the winner flashes past the flag stand or when someone triggers the crash that changes everything. It’s not the pass or the spin, not the restart or the pit stop. Sometimes a race can have those moments, too, but the best of them all? The one that makes you want to scream out loud, to jump to your feet and roar, the one that never runs out of hope that anything can happen, anything at all? That one happens every week, without fail… right before the green flag flies.

In that second or so, when the cars come off turn 3 slowly, slowly, and the pace car dives to pit road, the engines sound angry, desperate to break free from restraint. The anticipation drags it all out, slowing time to a crawl. And then all hell breaks loose as the green flag waves and time speeds up to normal again. Cars get passed, engines give up, tires fail, someone spins, someone dominates and the story unfolds.

What makes The Moment so special? Well, everything: the color, the sound, the crowd rising as one in anticipation of what’s to come. It all comes together in a couple of heart-stopping seconds. But what really makes that segment of time so achingly perfect is that right then, anything is possible. Anything can happen. The story hasn’t been written yet and you can still believe in a happy ending.

It doesn’t matter right then if your favorite driver drives for the richest team or the poorest. Right then, he or she can do the predicted or the impossible. You can almost taste the champagne sprayed in Victory Lane, feel the exhausted relief of crossing that line first. It can happen. In The Moment, anything can happen.

During the race, the hopes of The Moment are often dashed, particularly for fans of the drivers whose teams aren’t quite at the top of the ladder. Aerodynamics and tires and other drivers happen. Equipment fails. Cars just aren’t fast enough. Mistakes lead to penalties. Debris cautions tighten the action, but it’s a false sense of excitement and everyone knows it. There are gimmicks and disappointments and letdowns.

The powers that be in Daytona and the television booth have, for the most part, forgotten the magic of those seconds when anything can happen. They focus on outcomes and numbers and sensationalism and smoke and mirrors. Maybe they don’t need to dream of what might happen like the fans in the stands do. Maybe they have forgotten how. Maybe they lost perspective in the shadow of change, forgetting that there is beauty in simplicity.

It’s even easy for fans to forget that for those precious seconds, all is right and good. It’s easy to remember the disappointment at the end of the day instead of the excitement of how it began. Resentment for what went wrong blots out the simpler joy of knowing that right now, everything is right.

But the truth is, NASCAR doesn’t need to try so hard to insert that Game 7 moment into every race. The best part of any Game 7 is the anticipation before the first pitch is thrown or the ball is tossed into the air for the jump. It’s the conviction that your team can win and dread that they might not. It’s the feeling that everyone is in it together and while every fan in the stands has a different idea of the perfect outcome, they’re all united in their love of the game and their momentary belief that anything can happen.

NASCAR’s perfect moment — The Moment — is both stunning in its simplicity and deeply complex. It’s something different for everyone — anticipation, thrill, anxiety, abject joy. In The Moment, it doesn’t really matter what else happens in the race, because whatever does cannot possibly match the magic of right now. Because that right now is your time, your driver’s time, every fan’s in the seats time. There is one timeless second in every race where time and circumstances don’t matter; there is only intense hope and passion.

That is what makes the sport worth watching at the end of the day.

Nascar from “The Chase” to these artificial cautions will not and cannot let the season or individual race or individual anything play out naturally, and that is the biggest sin, that and they just don’t get it.

There will never be another caution-free race as long as Brian is in charge unless it is a car leading at the end that will put Hendrick in victory lane. We’ve seen what happens when a Hendrick car needs a caution, or doesn’t need a caution.

You can bet on it. It happens every time. Struggling if they are or a Ford is leading, caution. They get a mile long lead, no caution, cannot be said for others (Ford), I know one certain Ford driver who has been put to the “restart” test, ALOT!

I always get that feeling when the cars come out of turn three to take the green for the Daytona 500. As the season goes on, that”moment”you talk about seems to get less and less intense, with a few exceptions (Darlington, the Bristol night race). Sometimes, though, I’m just ready for the race to start and the excessive pre-race BS to be over.

The best races are the ones where that anticipation is rewarded by an exciting race, especially through the final laps. Unfortunately, that doesn’t happen during enough races.

I also get that feeling as the green flag waves at the beginning of the race. I am fine with races not being spectacular because that’s the reality. I might call a boring race a boring race but I still watch them. Unfortunately NASCAR wants more fans (and their money) and so NASCAR caters to the lowest common denominator to accommodate them; manipulating the races and rigging the rules to keep everything close and maximize the probability that there will be game 7 moments.

I will watch a boring race but I will not watch a reality television show with manipulative rules that undermine competition and fairness in the name of manufactured excitement. The biggest joke is the one race chase. It does not reward the driver that is most deserving given the structure of 43 teams racing each other week in and week out in a 36 race season.

I love those first moments – finally got to go to my first Daytona 500 this year, and that anticipation was just unreal. Agree – no need for fake cautions, and also agree that each race isn’t going to be exciting (which is expected)- but it would be nice for more excitement than we’ve got. Either way, i still love watching (twitter and MRN make it more fun). Hopefully Fontana puts on a great show this year – the one 2 years ago was just unreal.

In his book Awsome Bill From Dawsonville Bill Elliott, a man loathe to criticize, complains about all of NASCAR’s attempts to derail his 1985 season dominance with constant rules changes. He doesn’t see it as a personal thing, just NASCAR trying to keep him from “stinking up the show”. He also talks about all the things we still complain about such as fake cautions. This is 1985 remember and it wasn’t a new phenomenon then. NASCAR has always viewed it as a show as opposed to a competition. Until there is a real sanctioning body it will not change. Hey, did you hear the that! The rules just changed. Who’d a thought.

At least in the past they were a little less blatant about it and didn’t resort to it as often in my recollection (which only goes back about 20 years).

Of maybe it just didn’t seem as manipulative back then because, before the double file restarts, a fake caution didn’t penalize the guys running up front as much. Your place in line was a bit more preserved before and after the caution. Sure, you went from having a 10 second lead to a one car length lead but at least you clearly had the lead when the green flag flew after a caution.
Now every caution provides the opportunity for someone to steal a position and penalizes those on the inside or outside lane depending on the track.

And then there’s the wave arounds and luck dogs.

I’ve been reading a good many non sanctioned NASCAR books lately. The sanctioned ones are little more than PR fantasy fluff. Anyway, nascar is probably less corrupt now than it was at any time in the past. Still, less corrupt is a distinction without a difference like being a little bit pregnant. My point was merely that corruption is what we should expect until the France family is replaced with a legitimate sanctioning body. If you are looking for some interesting reading Google the France family fixed drug arrests in Daytona beach. Funny, that never appears in the NASCAR press.

And that is the stat that has completely change the complexion of today’s racing along with the NASCAR cheerleaders commentary script…….”look today we had 26 cars still on the lead lap, as compared to when Richard Petty and David Pearson had the rest of the field 3 laps down.”

Hey Amy, thanks for a great article. I seem to have forgotten that moment of the greatest hope and anticipation as the green flag drops. If I wanted to watch a real sporting event I’d go watch a highschool JV field and track event. The show Brian France and all the teams and drivers put on for my pleasure is way more fun! And Bill B, thanks for your observation the other day, I’m learning.
Thanks Amy, keep up the good work. You know, hope is always answered, just sometimes not the way we’d like.
David