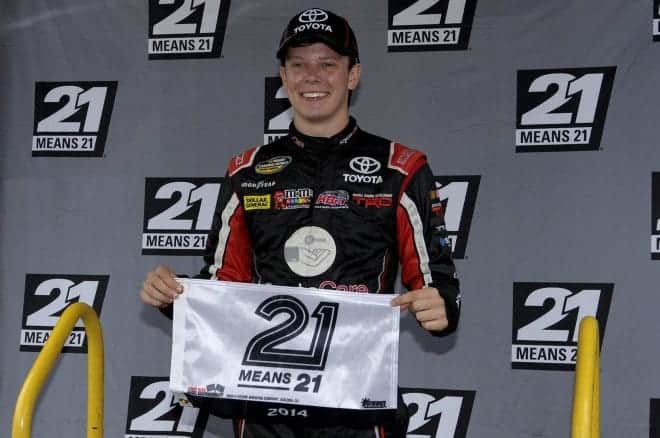 Erik Jones, the 18-year old phenom driving the No. 20 GameStop Toyota for Joe Gibbs Racing, swept all three qualifying rounds and won the pole for today’s NASCAR Xfinity Series race at Auto Club Speedway with a lap time of 40.384 seconds (178.288 mph). It is the first pole of his young career in only his eighth Xfinity Series start. Jones will share the front row with Richard Childress Racing driver Brian Scott.

In the No. 54 for this weekend, Denny Hamlin ended the final round of qualifying in third. Brad Keselowski and Regan Smith clocked in at fourth and fifth respectively.

Kevin Harvick, who was second behind Jones in the first two rounds of qualifying, fought a very loose car in the final five-minute session. His lap was good enough for sixth overall, in front of RCR teammates Austin Dillon and Brendan Gaughan, JGR rookie Daniel Suarez and Elliott Sadler.

The defending winner of the race, Kyle Larson, qualified his No. 42 Eneos Camaro in 11th. Larson, whose win in this race last year was his first in the Xfinity Series, crashed in practice yesterday and qualified today in a backup car. Larson’s win ended a nine-race winning streak at the 2-mile California track for Joe Gibbs Racing.

Only 40 cars attempted to qualify, meaning all 40 will start the race. With more than nine minutes remaining in round one, Derrike Cope had a plume of smoke and fluid come out of his No. 70 Chevrolet before he was able to set a time. Once Cope got the car back to the garage, the team discovered a loose oil hose. The team is fixing the car and will start at the rear of the field.

Coverage of the Drive4Clots.com 300 from Auto Club Speedway begins with NASCAR RaceDay: Xfinity Edition at 3:30 p.m. on FOX Sports 1. Race coverage is set begin at 4 p.m.